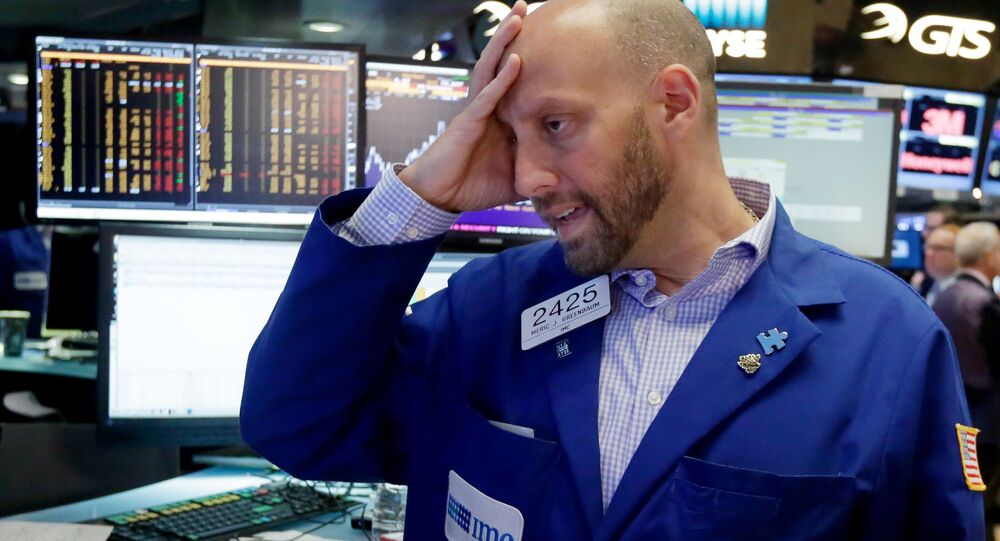 The UK’s decision to leave the European Union is a prominent risk to the US economy that might eventually push it over the fence into a recession due to high exposure of business investment in the non-financial sector to overseas risks.

© AFP 2020 / Daniel Leal-Olivas
Brexit Prompts Eastern Europe to Back Stronger EU
Kristian Rouz – Separation of the UK from the European Union (EU) stirs the prospect of an accelerated slump in US private sector investment, which has been gaining momentum since at least mid-2015 amidst the dollar’s strengthening and increased governmental capital spending in the non-financial sector. Albeit not as dramatic as previously expected, the Brexit spillovers on a global scale have prompted investors’ rush into haven assets such as the Japanese yen, gold, and US Treasuries, thus indirectly affecting US corporate spending plans overseas, where such enterprises have been facing tougher competition amid unfavourable monetary conditions.

Besides, the anticipation of the UK implementing new customs tariff rules is another factor complicating US investment planning overseas, whilst at home the excessive presence of the governmental funds in the real economy renders return-on-investment (ROI) oriented private investment less competitive as well. The result would be even slower US growth, effectively preventing the Federal Reserve from considering any interest rate hikes likely until after this year’s end.

Private sector enterprises “are very cautious right now,” Chad Moutray of the National Association of Manufacturers said. “This (Brexit) is just one more headache that manufacturers have to deal with.”

During the past two quarters, US business spending on capital equipment declined, with 1Q16 slump being the most dramatic since 2009, another indication of a looming recession. Should the measure post further declines in 2Q16, which is quite likely, three straight quarters of contraction in business investment would be a certain sign of hard times for the economy ahead, as historically, in 80% cases two consecutive quarters of declines in business investment were followed by a recession.

"The 'leave' outcome has introduced substantial uncertainty that likely would dampen US growth by delaying and or reducing business investment and consumption expenditures," William Lee of New York-based Citigroup said.

Aside from overseas risks, Brexit also has an impact of the domestic US situation, potentially impairing inflation outlook and consumer spending, resulting in an even slower broader economic growth. Last week, a report from the Commerce Department indicated non-defence capital goods spending excluding aircraft dropped in May for a second consecutive month, suggesting a further contraction in 2Q16 business investment. Investment in capital goods only posted gains in six out of past seventeen months.

"Remember too that Brexit is occurring while the U.S. economy is in the later stages of its current business cycle, meaning the U.S. is more susceptible to economic shocks," Steve Blitz of New York-based M Science said. "There is, happily, a lot less leverage in the system than there was in 2007, meaning no recession of equal magnitude is threatened.”

Brexit’s financial consequences are also likely to hinder the already weakening gains in the US labor market, further depressing spending and inflation. Weaker business and investment sentiment would also contribute to a deeper economic slowdown, with the overall economy already balancing on the edge of contraction. This could undermine the Democrats in the upcoming election, given the excessive US exposure to international shocks is taking a toll on the economic prospects at home after almost eight years of a Democrat administration in the White House.

“I think it is unlikely the U.S. consumer – which is driving this recovery – will be thrown off by Brexit in the short term,” Megan Greene of Toronto-based insurance and financial services company Manulife said. “If there is contagion to the rest of Europe, however, then a US recession becomes more likely.”

Whilst international risks are mounting, borrowing costs are bound to increase even without any policy moves from central banks, including the Fed. Although the Federal Reserve is poised to abstain from rate hikes, commercial banks are more inclined to tighten their underwriting standards further, becoming more reluctant to issue new loans, eventually pushing the Fed to a possible cut in base interest rates to as low as below-zero as a recession-aversion measure.