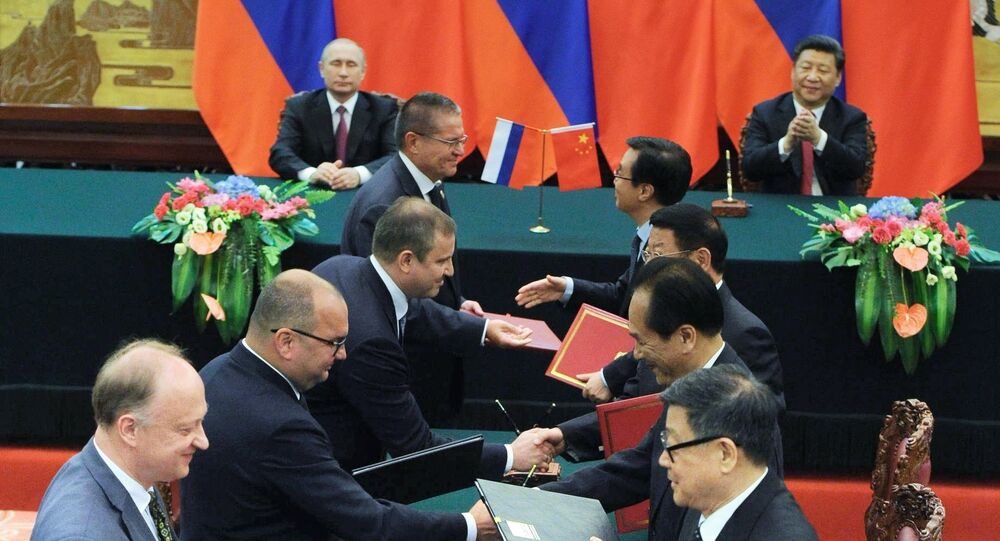 A wide array of lucrative bilateral cooperation agreements have been signed by Russian President Vladimir Putin and his Chinese counterpart Xi Jinping during Putin's visit to China this past week.

The documents were signed during Putin's visit to China, which took place between June 24 and June 25.

In honor of Putin's arrival in Beijing, a Chinese choir performed Kalinka Malinka, probably the most well-known Russian folk song.

Bilateral economic cooperation topped the agenda of Putin's talks with the Chinese President.

"We are changing our trade turnover structure, [steering it] in the right direction. This year, our exports of cars and equipment to China almost doubled, and we are very much grateful to our Chinese friends," Putin told reporters after the talks.

Development of a new long-haul aircraft

On Saturday, Russia and China signed deals that will allow them to cooperate on the construction of a wide-fuselage long-range plane and a civil heavy-lift helicopter.

A memorandum on building a 250-300-seat plane to rival Airbus and Boeing was inked during President Putin's trip to Beijing back in 2014. A similar agreement between Russian Helicopters and the Aviation Industry Corporation of China was signed in May 2016.

As for the new helicopter, it is expected to make its maiden flight in 2020, and by 2024 it is supposed to be fully certified. The helicopter is likely to be manufactured at an aircraft factory in Tianjin; demand for it is currently estimated at about 200 units.

The Russian company Russian Railways (RZD) and the company China Railway signed a comprehensive strategic cooperation agreement and a framework deal on the localization of the production of rolling stock and railway equipment in Russia.

Although the sides did not sign an agreement on financing the high-speed Moscow-Kazan railway, President Putin pledged that  Moscow and Beijing will agree on its construction before the end of this year.

"We will coordinate issues related to the construction of the high-speed Moscow-Kazan railway by year-end, and a step forward in this direction was made already today," Putin said on Saturday.

During Putin's visit to China, the Russian gas giant Gazprom and its Chinese partner CNPC clinched a preliminary agreement on the construction of underground gas storage facilities on Chinese territory.

China and Russia cooperate closely in terms of foreign policy and security, and have demonstrated a common approach to a wide range of global and regional issues, including counter-terrorism efforts, President Putin said during a reception to mark the 15th anniversary of the  signing of the Treaty on Friendship, Good Neighborliness and Cooperation.

"It is this document that legally defined the strategic and partner character of relations between Russia and China, which are based on mutual respect, friendship and the recognition of each other's interests; these relations not only meet the interests of our peoples, but also serve as an important factor regarding global and regional stability and security," Putin said.

He added that by "building up the Russian-Chinese partnership, we relied on the centuries-old traditions of relations between our countries."

"We achieved an unprecedented level of mutual trust and understanding, which allowed us to solve complex and very sensitive issues and which, most importantly, opened opportunities to move forward and bolster multilateral relations in various spheres," Putin pointed out.

Invitation to visit a G-20 summit

Also on Saturday, the Chinese President invited Vladimir Putin to visit a summit of the Group of Twenty that is due to be held in the Chinese city of Hangzhou in September 2016.

Host photo agency
Russia-China Relations Reach Historical Peak - Beijing
"We will meet on the sidelines of major international events before the end of the year," Xi Jinping said after talks with President Putin.

"I have already invited President Putin to pay a visit to Hangzhou in early September to take part in the G-20 summit," he added.

Putin, for his part, said that Russia will provide all necessary support to China during its G-20 presidency.

The G-20 is an international forum for the leaders and senior financial officials of the world's 20 major economies. The 10th G-20 summit was held in Turkey in November 2015.