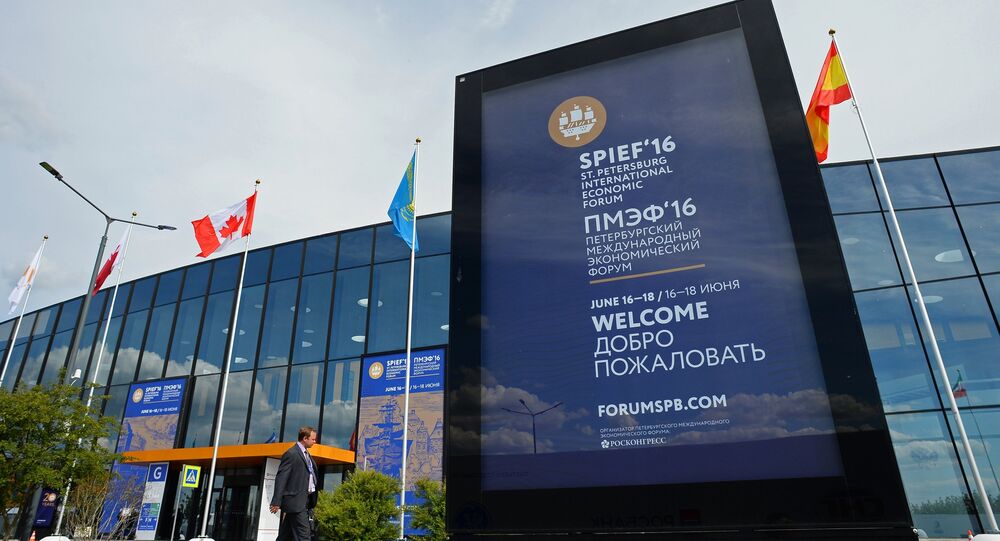 'Back to Business': St Petersburg Forum Opens Doors to East and West

Participants from the US and China are out in force at this year's St. Petersburg International Economic Forum, which is focused on the issues facing economic growth internationally, participants Alexis Rodzyanko of the American Chamber of Commerce in Russia and Sitao Xu of Deloitte China told Radio Sputnik.

The three-day annual St. Petersburg International Economic Forum opened on Thursday, attracting more than 10,000 political and business leaders, top scientists, public figures, and members of the media from 60 countries. They've gathered to discuss the most pressing economic and business-related issues facing Russia and the world.

​Alexis Rodzyanko, CEO of the American Chamber of Commerce in Russia, told Radio Sputnik that this year's discussion has a "back to business" theme, and deals more with international issues than domestic ones.

"We are discussing more global problems, global growth, global issues that impact Russia, and a bit less the bilateral issues and geopolitics of Russia vis-a-vis the West, vis-a-vis the US, which is good."

Rodzyanko said that one of his hopes for the conference is that politicians will follow the example of business, and forge closer international relations. He related that in 2013 when he was first elected president of the Chamber of Commerce. At the time, Washington officials told him that they, in fact, wanted to do more business with Russia.

"The more business we do, the more stable our relationship."

According to Rodzyanko, Washington did not put pressure on businesses not to attend the forum in recent years, but rather focused their pressure on key high-ranking individuals.

"That said, there are some senior executives who are here but keeping a relatively low profile and having their meetings in private," he revealed.

Looking ahead to the US presidential elections later this year, Rodzyanko said that a Republican victory appears more likely than a Democratic one to bring a greater chance of improving relations between the US and Russia.

"Judging from the rhetoric of the campaign, which often doesn't translate to reality, there is more of a chance for change on the Republican side than the Democratic side."

Sitao Xu, Chief Economist and Partner with Deloitte China, told Radio Sputnik that the forum provides an opportunity for Russia to build on its economic links with China, where infrastructure investment is recognized as key to economic growth.

"If China can offer any lessons to other countries, (they are that) China, as you know, takes infrastructure investment very seriously. That's very much long-term thinking, because you are saying infrastructure is a precondition for economic growth."

​"I'm not saying infrastructure will be the solution for everything, but the experience so far in China is (that) you need to get started by having good infrastructure and (that) even means the current generation may suffer in terms of financial returns, because you do this for future generations."

"That's actually what China is trying to replicate in other places, so clearly Russia may want to take advantage of this opportunity. I also think (that) from Russia's perspective it's important to understand what China has to go through."

Sitao Xu said that one of the tenets of China's future economic growth is "taking the environment seriously," in order to enable sustainable growth. This new view of economics has implications for industry across the world, including in Russia.

© REUTERS / Jason Lee
Showdown: Economic Standoff Between US, China Reaches Acute Phase
"If you destroy the environment, then what's the point in even having economic growth? Of course, when China started, the view was always to develop first, have pollution first and then deal with the pollution after you have economic growth. I think now we have to revise that very seriously."

"That means you have to slow down, because if you don't slow down it's not sustainable."

"That means for Russia, on the one hand, we need cleaner energy, so that is working in Russia's favor. On the other hand, we have to shrink certain industries, so that's going to be challenging, not just for Russia but for Canada for example, for Australia."

"Those countries have been riding on a so-called commodity super-cycle, the reality is there is no super-cycle, so Russia needs to understand what the major trends are," he concluded.