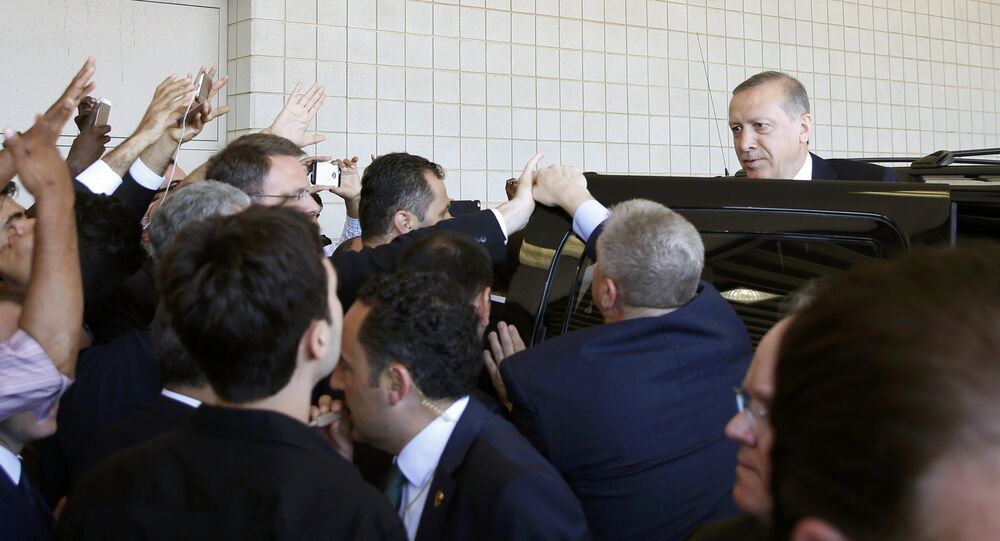 A series of incidents finally forced Turkish President Recep Tayyip Erdogan to interrupt his visit to the United States, where he planned to attend the funeral ceremony for boxing icon Muhammad Ali.

© REUTERS / Andreas Meier/Files
Farewell, Champ: 'Greatest' Boxing Legend Muhammad Ali Dies at 74
Turkish President Recep Tayyip Erdogan quickly interrupted his visit to the United States after an array of incidents ahead of the funeral service of boxing legend Muhammad Ali in his native city of Louisville, Kentucky, which Erdogan planned to attend, according to the Turkish newspaper Hurriyet.

The newspaper quoted presidential sources in Ankara as saying that Erdogan moved to depart for Turkey without taking part in the full funeral ceremony for the late boxer, which was attended by former US President Bill Clinton, Jordan's King Abdullah and former Afghan President Hamid Karzai.

When participating in funeral prayers for Ali on June 9, Erdogan reportedly tried to a put a piece of cloth from the Kaaba on the boxer's coffin but was refused the opportunity to do so.

Eyewitnesses said that the organizers allegedly offered to put the piece of cloth on the casket themselves later on.

However, another report claimed that Erdogan and Mehmet Gormez, head of Turkey's Religious Affairs Directorate, were also forbidden to read a piece from the Quran near the boxer's coffin.

Apparently, this proved to be the last straw, and compelled Erdogan to cut his trip short and return home.

Meanwhile, the Voice of America's Turkish edition reported that a short quarrel also erupted between US secret service officials and Turkish presidential body guards during Erdogan's visit to the Muhammad Ali Center in Kentucky.

© AFP 2020 / ADEM ALTAN
Erdogan's New Law: 'The Day Democracy Truly Died in Turkey'
The incident reportedly occurred after a secret service official attempted to stand in the same place as presidential bodyguards while Erdogan was getting into his car. A fracas was prevented thanks to efforts of security agents standing nearby.

Muhammad Ali died last week at the age of 74 after a protracted fight with Parkinson's disease. He died at a Phoenix-area hospital, where he had been treated for respiratory complications related to his illness for the preceding few days.

The embattled Turkish President has, for his part, recently faced international condemnation for his repeated crackdowns on political opponents and journalists, along with his administration's continued practice of buying oil from and funneling armaments to Daesh terrorists.