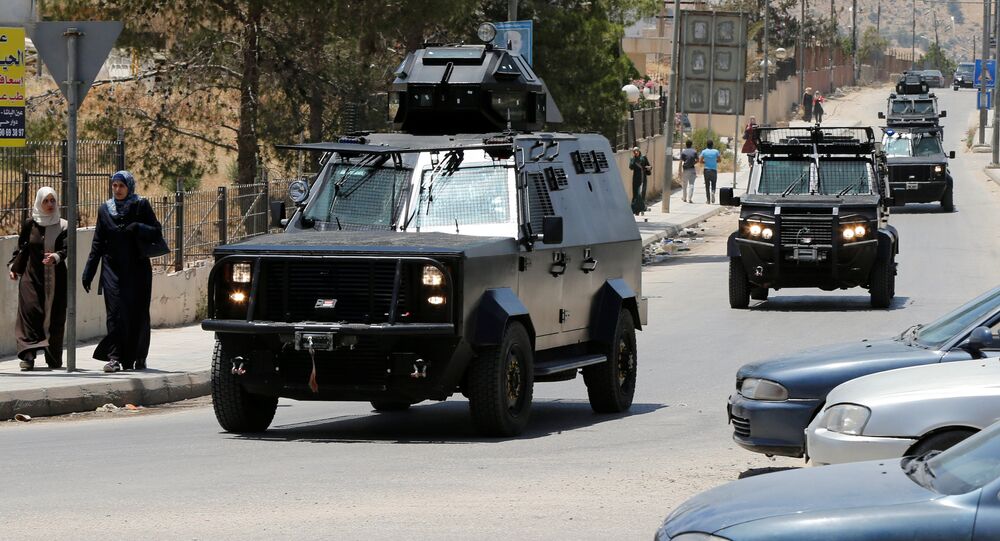 Daesh jihadists, might not actually be the worst evil the world is facing, there are other, potentially even more dangerous cell emerging in different places around the world, and no country is immune from the threat of one emerging on its territory, Nabil Naim, an expert in the Islamic Movements told Sputnik Arabic.

Commenting on the recent terrorist attacks in Jordan and Turkey and earlier attacks in Europe, in Brussels and Paris, Nabil Naim noted that there are potentially even more dangerous terrorist groups operating on the territories of these countries and that no country is safe from one emerging on its territory.

© AP Photo / Raad Adayleh
At Least Five Intelligence Officers Dead in Amman Terror Attack
“Nowadays, the most dangerous group that the Jordanian government and security forces face is a group called Khorasan, a group of professional engineers in the electronic, electrical and chemical affairs, which was once affiliated to Al-Qaeda, which later joined Daesh,” he told Sputnik.

What makes this group even more dangerous, the expert explained, is that it makes bombs and explosives which cannot be detected.

And it is an international group which targets all countries that they think are involved in fighting against them with the help of specific intelligence forces.

And these groups exist in Arab and European countries, the expert warned.

With regards to the recent terrorist attacks in Turkey, the expert noted that there are two types of groups that Recep Tayyip Erdogan is currently facing.

© REUTERS / Osman Orsal
Ankara Blames PKK Militants for Istanbul Attack Which Killed 11
First, he said is the Kurdistan Workers’ Party (PKK) which is based in Turkey and Iraqi Kurdistan, which is in constant conflict with Erdogan, and whose goal is to create an autonomous Kurdish region from Turkish territory.

The second type of groups are those based in Syria, similar to Daesh, Al-Nusra Front and others.

These groups started hitting back at the Turkish government in the same way “al-Qaeda” did when it hit America in September 11, the expert noted, after Turkey began pressuring them under an international pressure.

“Brussels is a stronghold for radical groups in Europe,” Nabil Naim noted.

The attack on Charles Hebdo was planned and prepared, and done with weapons brought from Belgium, he explained.

“The “Charles de Gaulle” incident is linked to a group in Brussels, which are composed of Moroccans and Algerians, calling themselves “Min Ajl Asharia fi Oroba” (for the Sharia in Europe) and they depend on suicide bombers,” he said.

Many Takfiri extremists exist in France, located in Marseille. As to Belgium, there are Islamic centers controlled by extremists, where they recruit people from the European community, the expert said.

“These groups’ basic approach is: those who don’t believe in Allah are non-believers. I had a discussion with their Mufti and according to them other communities are non-believers, as well as the ruler (governor) and his followers (police, army, the court, and media); all these must be eliminated. These groups can’t make a militant group unless they find someone to sponsor them,” he said.

© Flickr / Susan Melkisethian
Trust No More: ‘Turkey Is Turning Into an Unpredictable Country’
Many countries that are involved in the ongoing conflicts in the Middle East relied on these groups in order to segment the region of the Middle East, he further explained.

“The reason behind the spread of terrorism in the world is unemployed poor and marginalized or oppressed people… which is a result of a corrupt regime in the countries they live in. Young poor people do not have culture or awareness about these groups and are recruited, precisely when financial support is provided,” he told Sputnik.

What makes these terrorist organizations even worse is that they choose the so-called “soft targets”, which neither the government nor the security body can protect.

He cited as an example an exploding bus or car, or a football stadium, places which are always crowded and where many casualties are expected.

Just as it happened with tourism in Egypt – the financial costs borne by the country are huge, especially considering that the price of the dollar has doubled there, he finally stated.