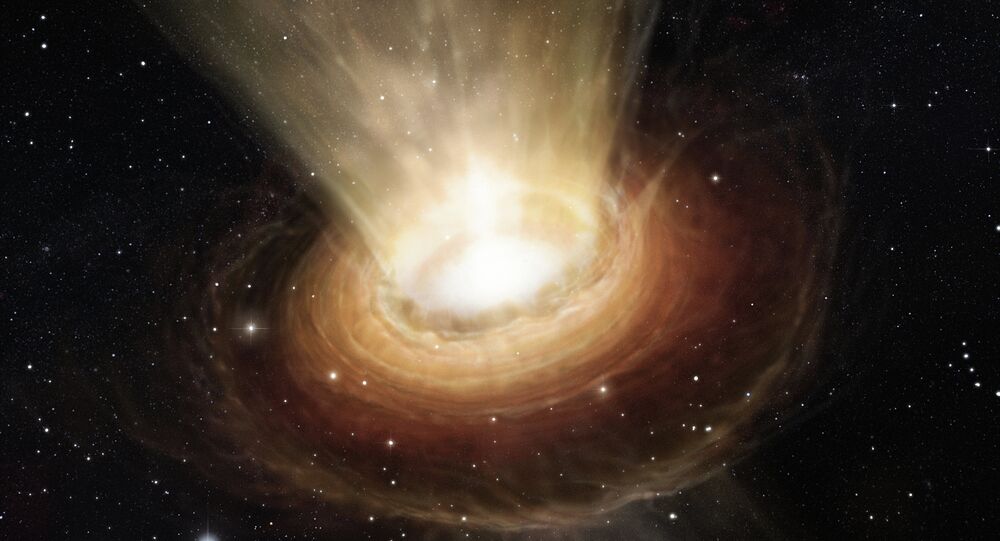 Black holes are a fixture in science fiction, but human beings have never laid eyes on one. Researchers from Harvard University and the Massachusetts Institute of Technology have now developed an algorithm to help people see these stellar wonders.

The algorithm is called Continuous High-resolution Image Reconstruction, or CHIRP. CHIRP will act as one large telescope, piecing together information collected from radio telescopes on the Earth’s surface. An image of a black hole will be created by filtering data and removing all atmospheric sound and interference.

This collective telescope, called the Event Horizon Telescope array, has six observatories currently participating. They will be attempting to "photograph" Sagittarius A*, a black hole at the center of our galaxy.
© NASA .
Scientists Size Up Supermassive Black Hole, 660 Mln Times Bigger than Sun
Katie Bouman, an MIT graduate student in electrical engineering and computer science said, "We would never be able to see into the center of our galaxy in visible wavelengths because there's too much stuff in between." Bouman, who led the development of CHIRP, explained that, "A black hole is very, very far away and very compact. It's equivalent to taking an image of a grapefruit on the moon, but with a radio telescope. To image something this small means that we would need a telescope with a 10,000-kilometer diameter, which is not practical, because the diameter of the Earth is not even 13,000 kilometers."

The researchers stated, "You could think of the model as a rubber sheet covered with regularly spaced cones whose heights vary but whose bases all have the same diameter," and that "Fitting the model to the interferometric data is a matter of adjusting the heights of the cones, which could be zero for long stretches, corresponding to a flat sheet. Translating the model into a visual image is like draping plastic wrap over it: The plastic will be pulled tight between nearby peaks, but it will slope down the sides of the cones adjacent to flat regions."
We’ll take their word for it, but we can’t wait to see that mysterious celestial object and compare it to its cinematic representations.
...
Reddit
Google+
Blogger
Pinterest
StumbleUpon
Telegram
WhatsApp
116