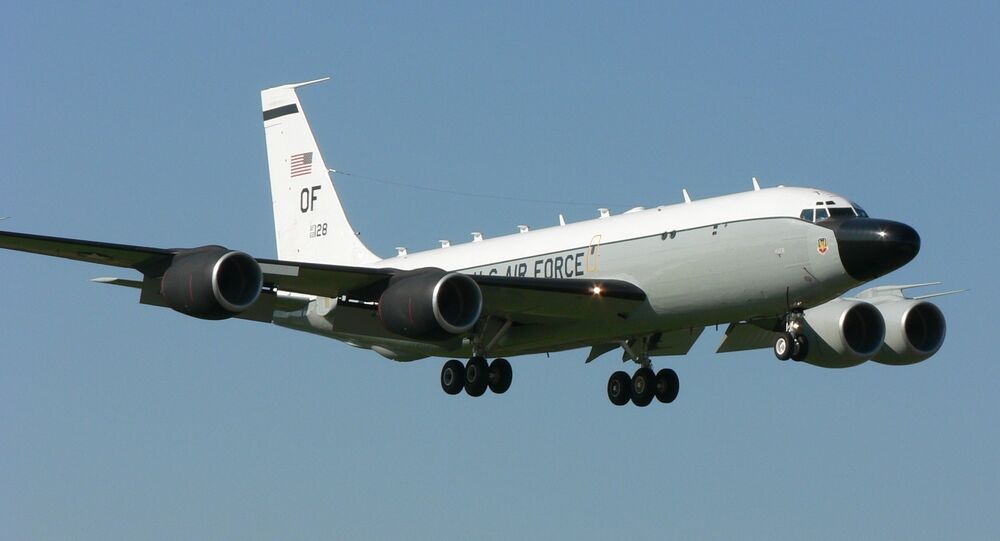 Last week, a US spy plane flying on the eastern border of Russia put themselves directly in the flight paths of two passenger planes, risking catastrophe. This was not the first time a US spy aircraft has approached Russian borders in recent weeks.

The incident took place over neutral waters of the Japan Sea on May 22. According to a source close to the situation, Russia traffic controllers had to change the flight level for two passenger aircraft in the area to avoid a collision.

The spy plane was identified as an RC-135 surveillance aircraft of the US Air Force.

© Flickr / Lance Cheung
Russian Military Protests 'Dangerous Actions' by US Spy Plane Over Sea of Japan
The dual incidents calls into question the professionalism of US military surveillance, and asks whether the latest provocative exercise by Washington is aimed at baiting Moscow into conflict or simply an act of supreme incompetence.

Defense Ministry spokesman Maj. Gen. Igor Konashenkov acknowledged that American spy planes conduct flights along eastern Russia daily, but "this time, while maneuvering along the international air route, the US spy plane created a real threat of collision for passenger aircraft, which could lead to catastrophic consequences."

However, spokesperson of the US Pacific Command (PACOM) said that there was no danger of a collision.

"But this is strictly prohibited. This is prohibited by the International Civil Aviation Organization (ICAO)," he said.

"The purpose of such flights is to monitor the radio-radar situation in the area, to detect the coordinates of Russian missile defense, as well as to assess the deployment of troops in the areas," military expert Alexander Drobyshevskiy told Zvezda TV channel.

"But as for American pilots, they break the rules across the world," he added.

Over the last month, US spy planes have approached Russian borders over the nine times, including over the Baltic Sea, in the Murmansk Region and in the Far East.

The interests of the US aerial surveillance are now focused not only on Russia’s Far East and the Baltic Sea. American spy planes have also been detected over the Black Sea and over northern regions.

"In the 1990s, the US didn’t conduct reconnaissance flights over Russia because at the time the Russian military was weak. Now, they are concerned with the resurgence of Russia’s military power. This is why the Pentagon has intensified aerial intelligence," expert Vladislav Shurygin was quoted as saying by Zvezda.

Another problem is whether the US plane was authorized to fly with transponders off.

In accordance with ICAO rules, transponders must be installed on each civil aircraft. In March 2015, NATO Secretary General Jens Stoltenberg said that military aircraft of the alliance were also equipped with transponders. If it is true then the US spy plane seems to have violated the NATO norms.

Last year, Finland made an attempt to settle the issue, having addressed to the ICAO. According to Bloomberg, the press-office responded that the rules of civil aviation do not apply for military aircraft.

Moreover, no international convention directly bans flying with transponders off.

Russian military and political analyst Alexander Perendzhiev assumed that the incidents over the Japan Sea were deliberate provocations ahead of the upcoming NATO summit in Warsaw.

"Americans want to find a pretext for new accusations against Russia. They want to present them at the summit," he suggested.