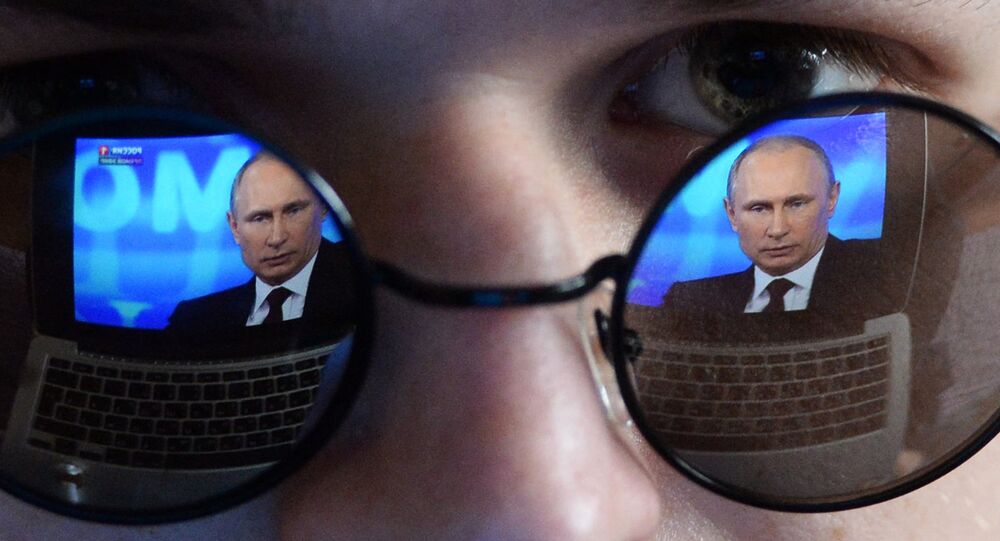 It is the US and NATO which are “playing the first fiddle” in spreading Russophobia, however this only reveals their extreme despair over the gradual loss of their dominance on the world’s political stage, and is part of Washington’s efforts to create widespread chaos, according to an expert in international relations František Škvrnda.

© REUTERS / Luke MacGregor
UK Government Espouses 'Dangerous Russophobic' Ideology
“Some time ago it seemed that Russophobia had fallen into oblivion,” writes Škvrnda, who holds a PhD in International Relations and works for the University of Economics in Bratislava, in his analysis on the rise and spread of Russophobia for the Vaše věc website.

However, he notes, after President Putin’s speech at the Munich Security Conference back in February 2007 it has risen to the new level.

It only increased when the Ukrainian crisis broke out and after Russia launched its aerial campaign in Syria in response to the request of President Assad.

“The US and NATO are playing the first fiddle in spreading Russophobia,” the author writes. “By portraying Russia as a threat, the US only reveals its extreme despair over the gradual forfeit of their dominance in world politics and explains the US’ efforts to create a chaos which will spread to everything.”

The author calls the remarks on the topic by the US Secretary of Defense and the Secretary of State an “exhibit of schizophrenia.”

On the one hand, they call Russia a military threat to the US, on the other – they are persuading NATO European member states that they should not fear “the evil Russians,” because Washington is coming to their rescue by expanding its military presence in Europe.

The expert further notes that Europe is no longer surprised by the words of US generals and the representatives of the military-industrial complex on the obsolescence and inefficiency of the US weaponry, because they are “bringing the grist to the mill of Washington’s financial crisis and of the world, ruled by dollar.”

© Wikipedia
Vikings Striking: Norway to Double Its Warships to Track Russian Fleet
The remarks of NATO officials and its Secretary General Jens Stoltenberg are also of special interest. An analysis of their statements reveal their political dualism: NATO is strong enough to rebuff Russia’s attack, without actually offering any evidence that Russia is planning an attack.

And on the other hand, they add, somewhat in passing, that Russia must be listened to, because without it (and without recognizing its interests) there can be no security in Europe.

Similar views are echoed by the Chairman of the NATO Military Committee, Czech General Petr Pavel, which sees the “Russian threat” around every possible corner and accepts the use of nuclear weapons against Russia.

The statements of Army General Curtis Scaparrotti, who was recently appointed as NATO’s Supreme Allied Commander in Europe and who right away claimed that a resurgent Russia poses a threat to the Alliance and that NATO’s priority is “containment of the Russian aggression,” only add to the global picture.

However, the author urges to keep in mind, especially during this difficult period in the history of the EU and the whole of Europe, that Russophobia has never resulted in anything positive and has only aggravated existing problems.

© AP Photo / Mindaugas Kulbis
Why Didn't Washington Dissolve NATO After Collapse of USSR?
It has already led to, more than once, a rise of tensions which only undermined economic and political stability on the continent.

Will any of the European leaders “come to their senses,” even though the US and NATO officials are holding onto a different opinion.