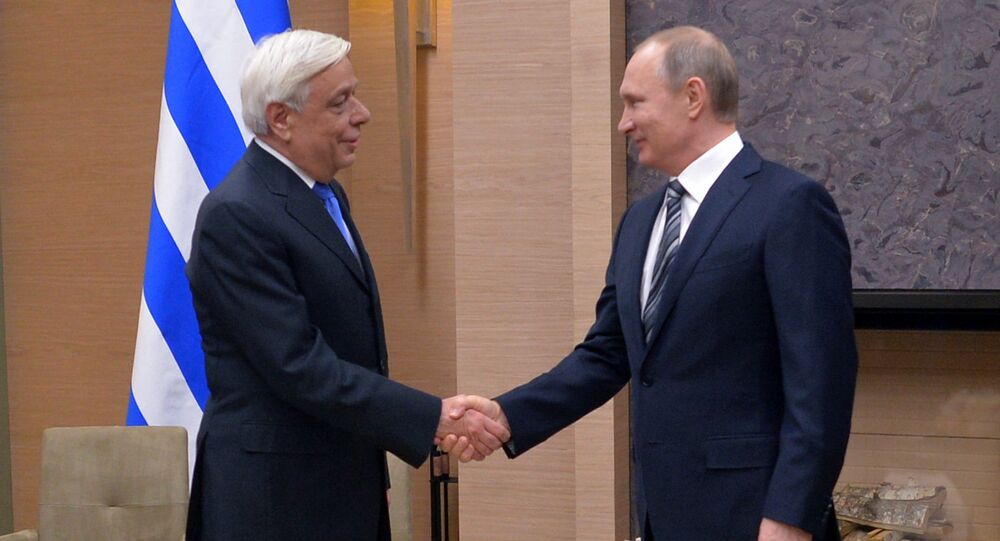 A Friend by the Aegean: Putin's Visit to Athens May Indicate Closer Ties

Russian President Vladimir Putin's upcoming visit to Greece will be his first such trip to an EU country in six months, something that may indicate the potential for sustained relations between Moscow and Athens, according to the Russian news network RBK.

© CC BY-SA 2.0 / Airwolfhound / OC-135B Open Skies
Russia to Hold Observation Flight Over Greece Under Open Skies Treaty
Next week President Putin will visit Greece, his first trip to the EU in six months; the visit can be seen as a sign that ties between Moscow and Athens show no signs of fraying, the Russian news network RBK reported.

RBK quoted sources familiar with the situation as saying that Putin is due to arrive in Athens on May 27, in a visit that is expected to last two days.

The visit will interrupt a long pause in Putin's travels to Western countries. Putin last visited the EU on November 30, 2015, when he took part in the UN conference on climate change in Paris.

Separately, RBK cited sources in the Russian Foreign Ministry and the presidential administration as saying that aside from Greece, Putin isn't planning to visit any EU countries in the next six months. One source added that some EU leaders may attend the 2016 St. Petersburg International Economic Forum in June, which will be attended by Putin.

Putin was invited to visit Greece by the country's President Prokopis Pavlopoulos, who visited Moscow in January 2016 when he officially unveiled the beginning of the Russia-Greece Cross Year.

In 2005, Putin visited Greece, but not the capital Athens, RBK said, citing his talks with then-Prime Minister Costas Karamanlis and his subsequent visit to Mount Athos.

© Sputnik / Alexei Nasirov
Russia, Greece to Broaden Agricultural Cooperation
In this context, RBK quoted the Russian newspaper Rossiyskaya Gazeta as saying on May 16 that during his forthcoming visit to Greece, Putin is again going to pay a visit to Mount Athos.

RBK also referred to the news network Tsargrad, which said that Russian Orthodox Patriarch Kirill also plans to visit Mount Athos, an event that is due to take place in late May. The visit is part of the celebrations dedicated to the 1,000th anniversary of Russia's presence at Mount Athos; Russian monks first travelled there to take up residency in the 11th century.

As far as Greek Prime Minister Alexis Tsipras is concerned, he is a frequent guest in Russia, RBK said, citing his visits to Moscow and St. Petersburg last year, when he participated in the International Economic Forum. Also last year, Putin and Tsipras spoke six times on the phone, RBK recalled.

In general, relations between Moscow and Athens have seen a noticeable thaw in ties since the Greek party Syriza coming to power in January 2015. In the past 18 months, Western media have repeatedly referred to Greece as one of the main opponents of sanctions against Russia, according to RBK.

A few days after Syriza's victory, it was reported that NATO intelligence agencies were dealing with Moscow's alleged ties with the new Greek government.

At the same time, Athens has consistently supported the extension of the anti-Russian sanctions during EU summits. In this regard, RBK quoted EU expert Yury Kvashnin as saying that such an inconsistency by the Syriza government can be attributed to several factors.

On the one hand, Athens plays the "Russian card" by flirting with the Kremlin in order to show its importance for Brussels and probably prompt it to take a more liberal course in relation to Greece's debt problem. On the other hand, Athens, in practice, defiantly backs a pan-European position, according to Kvashnin.

Another major factor pertains to Greece's domestic policy, RBK said, referring to Greeks' friendly attitude towards Russia in spite of the diplomatic crises and other circumstances.

© Flickr / Bruce Harlick
Athens Hopes Russia, Greece Cross-Cultural Year to Boost Relations
In any case, normalizing relations with Moscow has become a key priority of Athens, which was confirmed by President Pavlopoulos  a month ago, when he said that "Russia has many allies within the EU."

It is in this context that Athens is starting to resume the practice of bilateral meetings and exchange high-level visits, Kvashnin said. According to him, the mid-2000s saw the peak of Russian-Greek relations under Costas Karamanlis, with Athens being a strategic partner of Moscow, including in the military-technical sector.

Subsequently, the severe crisis and the frequent change of ruling parties in Greece finally led to the chill in bilateral ties. Restoring and maintaining these relations is something that remains high on the SYRIZA government's radar, RBK concluded.