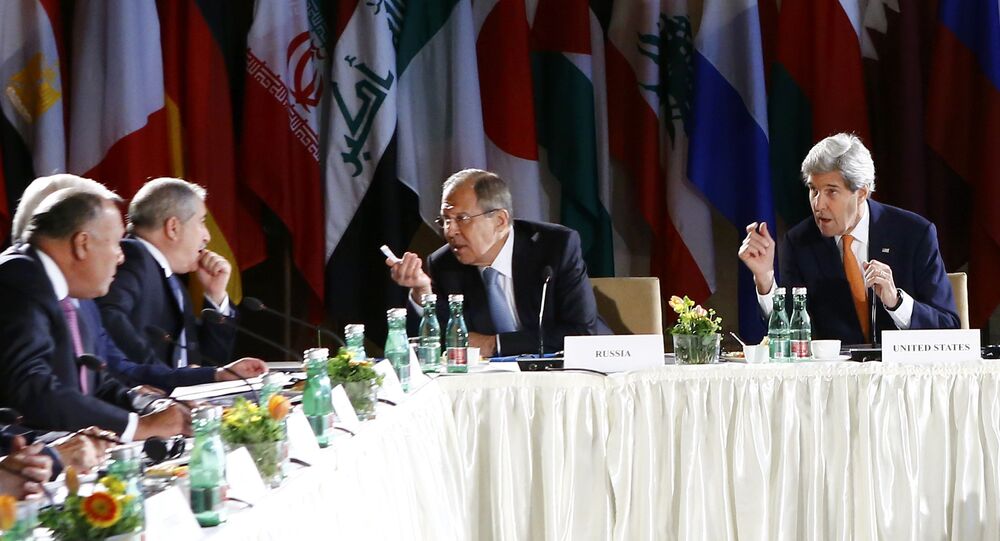 As a meeting on Syria, co-chaired by the US secretary of state and Russian foreign minister has wrapped up in Vienna, a London-based pan-Arab daily gives its reasons why the US is no longer a key player in the settlement of the conflict, pointing out that for whatever reason, John Kerry first rushed to Saudi Arabia and only then came to Vienna.

A meeting of the International Syria Support Group (ISSG), attended by the US, Russia, European and Middle East powers, wrapped up in Vienna on Tuesday.

The powers called for a full cessation of hostilities and access for aid but failed to agree on a new date to resume the Syrian peace talks.

Meanwhile, the London-based pan-Arab daily Al-Hayat gave its reasons why the US is no longer a key player in the settlement of the conflict.

The author, George Saaman, pointed out that US Secretary of State John Kerry, who co-chaired the meeting with his Russian counterpart Sergei Lavrov, had made a pit stop in Saudi Arabia before travelling to Vienna.

“John Kerry’s trip to Saudi Arabia just ahead of the ISSG group in Vienna once again illustrates that the US is trying to make an agreement with Riyadh,” reads the article.

“Riyadh, however, is still clinging to its firm political stance regarding all [regional] crises and has no intention of changing its plans,” it says.

© AP Photo / Marty Lederhandler
'One Step Closer to Justice': US Senate Passes Bill Allowing 9/11 Victims’ Families to Sue Saudi Arabia
Neither Washington nor anyone else will be able to ignore Saudi Arabia during the process of the Syrian settlement, the article explains.

Saudi Arabia is not ready to change its stance or compromise. It does not bargain when it comes to its own national security or the security of the Gulf Cooperation Council (GCC).

Secondly, the author points at the discrepancies between the US and Russia, and advises Washington to settle these first.

He says that apart from Syria, there are many other unsolved issues between the two, including the Ukrainian crisis and the deployment of the US missile defense network in Europe.

© REUTERS / Francois Lenoir
Obama Launches Military Buildup Along Russia’s Borders Out of ‘Total Panic’
“Until these discords and conflicts are resolved, there will be no mutual understanding reached on Syria,” the author says.

Russia is annoyed with US policy and is forced to respond to the threats to its security. Moscow is greatly concerned and has warned that it will strike back.

However, the author notes, Moscow has every intention of making a breakthrough on Syria before the new US president is sworn in next January.

Russia has to hurry up with beefing up its positions in the region and proving to the world that it has made a comeback to the international arena as a strong player.

© Photo : Wikipedia.org
Here's the Most Dangerous Thing About US Missile Defense in Eastern Europe
There is no doubt that the buildup of US missile defense along Russia’s borders will force Moscow to further concentrate on Syria and attempt to capitalize on the crisis as much as it can.

Another tough issue for Washington is its relations with its European allies, who have been practically squeezed out of the resolution of the Syrian conflict.

The opinion of the European Union was also ignored during the nuclear talks between Iran and Washington.

The author, however, doubts that Europe has enough leverage to stand its ground.