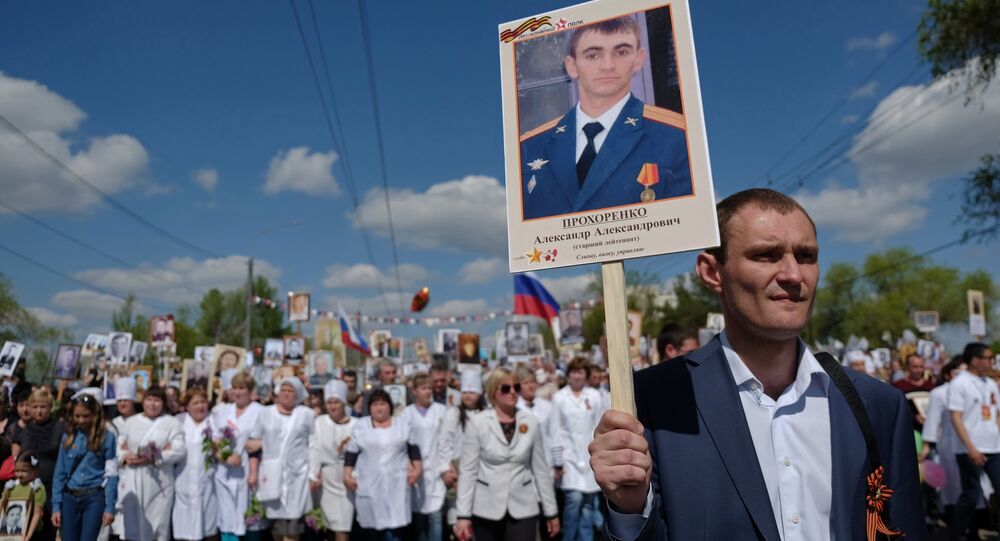 A special course at the National Association of Italian Paratroopers will be for the first time named after a Russian hero, who gave his life to help liberate Palmyra from Daesh, head of the Roman branch of the Association Adriano Tocchi told Sputnik.

© Sputnik /
Brittany Couple Presents WWII Medals to Family of Fallen Russian War Hero
In an interview with Sputnik's Italian edition, Adriano Tocchi, head of the Rome branch of the National Association of Italian Paratroopers said that the Association's special course will be for the first time named in honor of Russian officer Alexander Prokhorenko who died when helping liberate the ancient Syrian city of Palmyra from Daesh terrorists.

The course will bear the name of a non-Italian hero for the first time in the history of the Association, Tocchi said, adding that he is convinced that "there are no heroism-measuring scales when it comes to nationality."

He also said that he was shaken by Prokhorenko' words about his determination to die and not surrender to Daesh.

"For me, a man who said so can be white, black or yellow, but he is a soldier in the full sense of this word. He also asked his commander to tell his family that he loves them and that he died for his Fatherland.  Anyone who has a heart and loves their country cannot remain indifferent to this story," Tocchi said.

He also voiced hope that his initiative will be supported "by all those who are interested in this."

"The values we are talking about do not have a nationality. They are just heroes and we must honor them as heroes. And God forbid, if someone comes up with the idea that a Russian hero is less worthy of respect than an Italian hero. We speak of absolute values, and I would like to see my initiative being endorsed by all those interested in it," he added.

Tocchi also said that "he would be happy if this special course in September was attended by a Russian officer-paratrooper."

© Sputnik / Ministry of defence of the Russian Federation
One Good Turn Deserves Another: Russian Defense Ministry Awards Military Cooperation Medals to French Couple
Earlier this month, a retired French couple met Russian Defense Ministry officials to personally hand over their own war medals to the family of Prokhorenko. In addition to a Legion of Honor medal, the Mague couple also presented a War Cross featuring a Bronze Palm Leaf.

Alexander Prokhorenko, the 25-year-old Russian senior lieutenant, was killed during the military operation to liberate Palmyra from the terrorists who had defaced, dynamited and looted its ancient treasures. He was working on the ground, providing intelligence and working as an airstrike spotter to assist in Russian attacks on Daesh targets in the city.

Daesh Trying to Cut Palmyra Off From Government-Controlled Territories