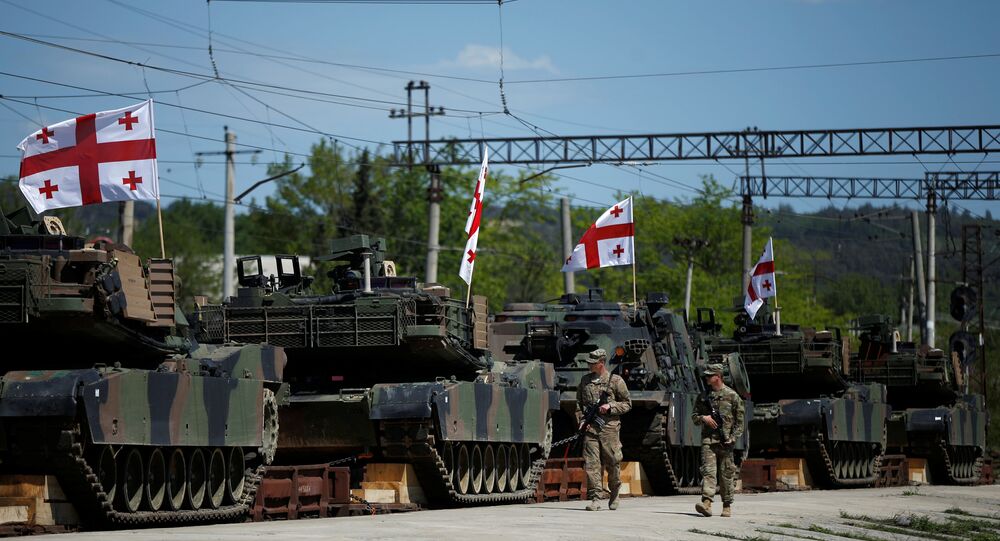 It seems that almost every other day NATO begins a new military drill somewhere around the world, and almost half of them are on Russia’s borders. The Alliance has used the Ukrainian crisis to build up its military presence in Russia’s immediate proximity, and Russian military call it as they see it: NATO is getting ready for war.

NATO has just kicked off its Exercise Noble Partner 2016 at Georgia’s Vaziani Training Area, which will last until May 26.

The drills involve 500 Georgian, 150 United Kingdom and 650 US service members who are incorporating a full range of equipment, including US M1A2 Abrams Main Battle Tanks, Bradley Infantry Fighting Vehicles, M119 Light Towed Howitzers and several support vehicles, says the official site of the US Army.

The US forces are members of US Army Europe (USAREUR), elements of the US-based Regionally Allocated Force (1st Brigade, 3rd Infantry Division) contribution to NATO Response Force 2016 and the Georgia State Army and Air National Guard.

There are two more simultaneous military exercises on the territories of the former USSR republic going on right now.

The 6,000-strong Spring Storm in Estonia, which will last until May 19 includes Latvia, Lithuania, the Netherlands, the United States, the United Kingdom and Germany having sent company-sized units to take part in the exercise.

A Canadian team of specialists and Finnish staff officers are also taking part.

© AP Photo / Roveliu Buga
US military vehicles drive on a road in Sculeni, Moldova, Tuesday, May 3, 2016, as some 200 U.S. soldiers arrived in the country for more than two weeks of exercises, in a show of U.S. strength in the region

NATO is also running Dragon Pioneer in Moldova, which will last until May 20 featuring 198 servicemen of the 2nd US Cavalry Regiment and 165 servicemen of the National army. The US has sent 58 units of equipment, including  11 battle and supply vehicles, 18 Humvees and 29 medical and transport cars, joined by 40 Moldovan transport and supply vehicles.

"NATO is Getting Ready for War With Russia"

Igor Korotchenko, military expert and chief editor of the Russian magazine National Defense told Radio Sputnik that NATO views Russia as a real military adversary and assumes that war with Russia is not just a possibility, it is actually getting ready for it.

© Flickr / U.S. Army Europe Images
Now NATO Tries to Frighten Russia as ‘It was the First to Start’
The Alliance has already started the buildup of a full-fledged military infrastructure in the countries which could further serve as a military foothold for the units aimed against Russia.

These countries include the Baltic States, Poland and Romania amongst others.

The military expert noted that NATO infrastructure in Eastern Europe is being accompanied by the deployment of US missile launch sites in Poland and Romania and a step up of NATO naval units in the Baltic and North Seas.

“If we call things by their proper names – NATO is getting ready for a real war. It does not necessarily mean that this war will break out. But fact that these measures of combat operations and continuous large scale NATO drills with the participation of American units are being staged along Russia’s north-western border signal that the situation there is very tense,” he stated.

No, NATO is "incapable of meeting the serious security challenges Europe is currently facing"

However another military expert, Sergei Ermakov told Radio Sputnik that the so-called “Russia deterrence” is just a pretext, a ghost story for another reason altogether.

© Flickr / UNC - CFC - USFK
Worse Than Breedlove? NATO's New Commander Gets Off on the Wrong Foot With Russia
“Russia has absolutely no intention of attacking either the Alliance or any of its member states,” said Ermakov, the deputy director of the Taurida Information and Analytical Center at the Russian Institute of Strategic Studies.

“It was always very convenient for the US to solve some economic and political tasks from the position of military power dominance,” he said.

The expert then explained that this is how the US is trying to keep NATO afloat, even though the Alliance is incapable of meeting the serious security challenges Europe is currently facing.

It is unable to respond either the refugee crisis or to the problems of international terrorism.

It is only able to respond to the artificial problem of “Russia deterrence,” he added.

Ermakov also explained that NATO is no longer a monolithic block. Serious military member states have no intention of any additional military deployment, thus it is left to the US. That is why there is the need to increase the military budget for its European command fourfold and the plans to build up the military presence along Russia’s borders.

Russia has the Means to Respond to NATO’s Buildup

© Sputnik / Igor Zarembo
As NATO Expands Along Russia's Borders, Did It Not Get Putin's Message?
The expert however said that Russia has the means to respond to NATO’s buildup.

“The responsive measures are already being taken,” he said.

“Russia has both symmetric and asymmetric responsive measures and parts of this work are being done through political and diplomatic channels,” he added.

Ermakov explained that Russia is not interested in a conflict and has always invited NATO to sit down at the negotiation table.
However if NATO goes on with its tendency of portraying Russia as the enemy, Russia will be forced to pursue a more hardline policy towards the Alliance, he finally warned.