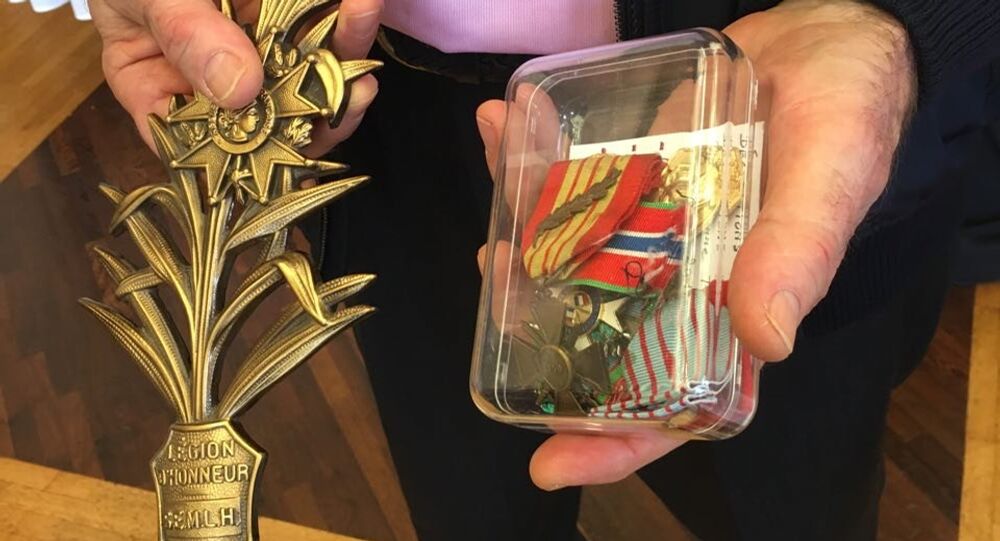 Another French couple has sent their own WWII-era medals to the family of the late Russian officer who gave his life to help liberate the ancient city of Palmyra from Daesh terrorists in March 2016, according to RIA Novosti.

© Sputnik / Ministry of defence of the Russian Federation
One Good Turn Deserves Another: Russian Defense Ministry Awards Military Cooperation Medals to French Couple
Another French couple, the Floch family of Brittany, have handed over their own WWII-era medals to the Russian Embassy in Paris so that they could then be delivered to the relatives of a Russian officer who made the ultimate sacrifice while liberating the ancient city of Palmyra from Daesh terrorists in March 2016, RIA Novosti reported.

The hand-over ceremony, which was attended by Russian Ambassador to France Alexander Orolv, took place at the embassy on May 9, coinciding with celebrations marking the 71st anniversary of Nazi Germany's defeat in World War II.

"I'm giving my father's Legion of Honor Order and other medals to the family of Russian hero Alexander Prokhorenko. When I learned of his feat, I immediately thought about my father, who also fought many years ago but who was lucky to stay alive. I'm paying tribute to the hero who fought terrorism, performing a feat on a global level," Jean-Paul Floch said.

He added that his decision to hand over the medals was influenced by the fact that "the Russians paid a very high price in the fight against Nazism."

The Floch couple's move was preceded by a similar gesture by Jean-Claude Mague and Micheline Mague, who sent their own WWII medals to Prokhorenko's family last month.

During a meeting with Russian Defense Ministry officials in early May, the Magues personally handed their own medals to the family of Prokhorenko. In addition to the Legion of Honor medal, the family also presented a War Cross featuring a Bronze Palm Leaf.

© Sputnik / Ministry of Defence
Living in Memory: Russia Pays Last Respects to Hero Killed in Palmyra Battle
The medals were issued to relatives of the Magues who fought against the Nazis as part of French resistance groups during World War II. On May 9, the retired couple met Russian President Vladimir Putin, who said that "we are all very touched by this gesture."

Prokhorenko, the 25-year-old Russian senior lieutenant, was killed during the military operation to liberate Palmyra from the terrorists who had defaced, dynamited and looted its ancient treasures. He was working on the ground, providing intelligence and working as an airstrike spotter to assist in Russian attacks on Daesh targets in the city.