It seems that neither the United States nor Saudi Arabia have showed too much concern about the lives of ordinary Yemenis, Belkis Wille, a Yemen and Kuwait Researcher at Human Rights Watch, told Sputnik.

© AFP 2019 / Hani Mohammed
Saudi Arabia's UN Envoy Denies Coalition Uses Cluster Bombs in Yemen
In an interview with Sputnik, Belkis Wille, a researcher at Human Rights Watch specializing in Yemen and Kuwait, said that the lives of ordinary Yemenis are of little concern to either the United States or Saudi Arabia.

The interview came after the Human Rights Watch called on Washington to stop producing the cluster bombs that Saudi Arabia has used against Yemen.

"We don't have a comprehensible picture of that, but scores of people have reportedly died in the cluster bomb attacks. Even one civilian dying is too many, "she said.

Wille added that there are companies in the United States within the military-industrial complex that are unwilling to stop producing cluster bombs.

"This is a money-making industry in the United States, where a powerful lobby is in place to make sure that cluster munitions can continue to be sold," she added.

She also pointed the finger at the coalition for showing little concern for the lives of civilians in Yemen while staging cluster bomb strikes there.

"There is a lack of care on the side of the coalition to abide by the general principles of the laws of war when conducting such attacks. If the coalition adhered to these principles, it could dramatically reduce the number of civilians killed," she said.

According to the organization' latest report, the munitions exported to Saudi Arabia could fail to meet US export law, which provides for a "reliability rate of better that 99 percent".

This means that the bomb can only be sold as long as the manufacturer guarantees more than 99 percent of its ordnance goes off. 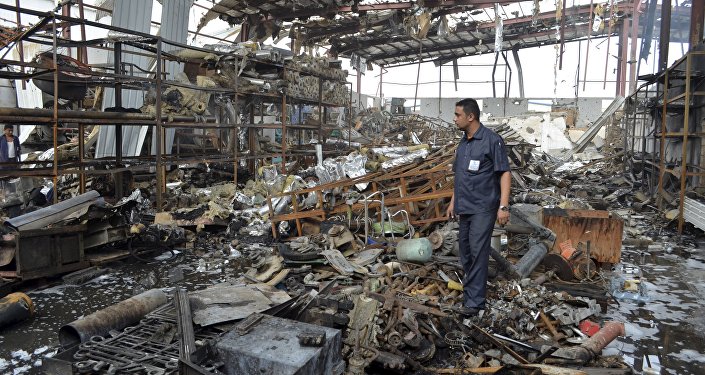 © REUTERS / Abduljabbar Zeyad
Int'l Community Must Condemn Riyadh for Using Cluster Bombs in Yemen - NGO
The organization questions this failure rate and points out that the munitions have been used in or close to civilian areas, which, again, violates US regulations for exporting cluster munitions.

Earlier identified by the Human Rights Watch, the CBU-58 cluster bombs and BLU-63 submunitions were reportedly developed by the United States during the Vietnam War and are designed to attack personnel and lightly protected materiel. As for the submunitions, they also contain 5-gram titanium pellets that have an incendiary effect on flammable targets, rights activists said.