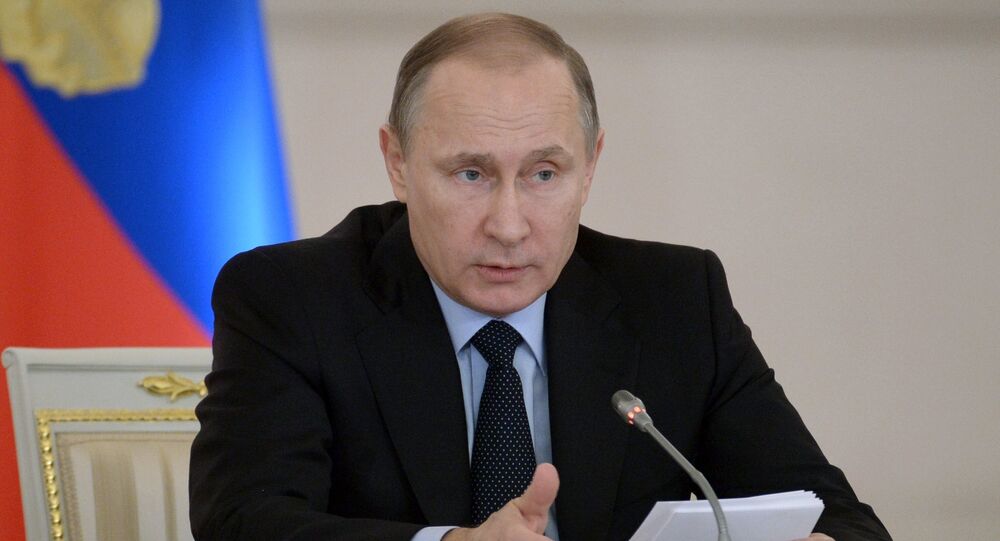 Russian President Vladimir Putin ranks among YouGov's top ten most admired men in 2016; the other politician to move into the top ten was German Chancellor Angela Merkel in eighth place.

© Sputnik / Sergei Guneev
Middle East Leaders Give Up on Obama, Turn to Putin - US Diplomat
Russian President Vladimir Putin has entered the market research firm YouGov's list of the top ten most admired men in 2016 in sixth place, one below British physicist Stephen Hawking, who moved up from ninth place.

The company conducted a survey of respondents in 30 countries to determine the results.

Bill Gates is the world's most admired man for the third year running, and Angelina Jolie has been named most admired women since last year, when YouGov began testing the most admired men and women separately.

World's most admired 2016: Putin and the Queen up, Pope Francis and Malala down – https://t.co/N19gz3fzqp pic.twitter.com/Ko0WUlbO3e

​YouGov gathered open-ended nominations from panelists in December, using these to compile a list of 20 men and 20 women, and in January polled people again to choose who they admire most from the two lists. They created a percentage share of admiration that is displayed to the right of each name in the above graphic.

The survey found that President Putin is the most admired man in Russia, and he is also among the top five most popular men in Egypt, China, Saudi Arabia and Morocco.

© Photo : yougov.com
YouGov's graph of admiration for Vladimir Putin by country
In December 1,000 readers of the UK's Express newspaper told a survey that most of them would rather be led by the Russian President than their own Prime Minister, David Cameron.

Asked, "Who would you rather was Britain's prime minister?" 78 per cent chose the Russian president, while 22 per cent voted for Mr. Cameron.

© Sputnik / Sergey Guneev
Putin Enjoys 82% Approval Rating in April - Poll
The President's worldwide popularity is also matched by the results of opinion polls at home in Russia. According to an April poll of 1,600 respondents in 48 Russian regions conducted by the Levada Center, an independent research company, a whopping 82 percent of Russians approve of Vladimir Putin's work as Russia's President.