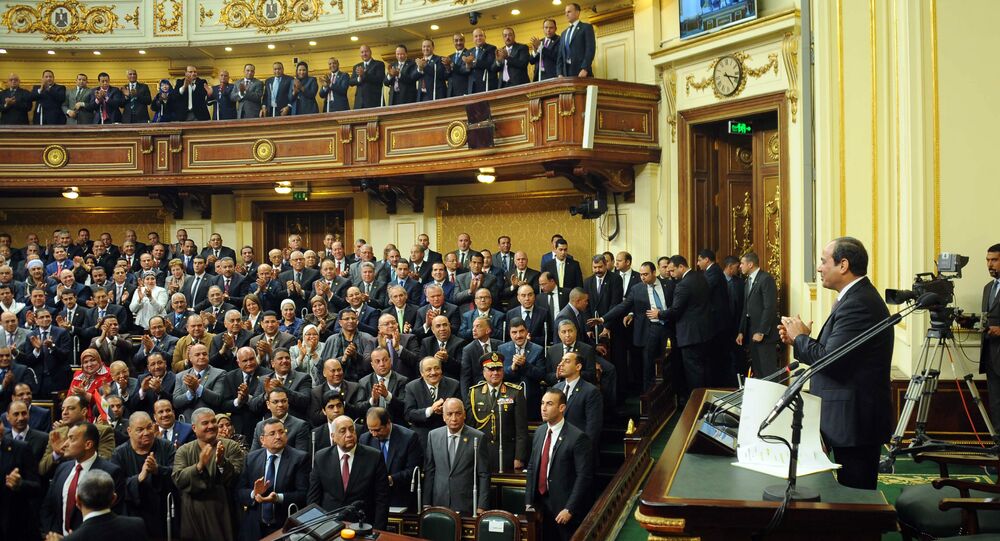 Hundreds of Egyptian journalists gathered outside the Press Syndicate in downtown Cairo on Wednesday to rally against press restrictions. The reporters threatened to go on strike unless Interior Minister Magdy Abdel-Ghaffar steps down.

© Sputnik / Eduard Peskov
Cairo Ignoring Turkey’s Attempts to Interfere in Internal Affairs - Defense Ministry
The protest took place following a recent raid on the press headquarters and the arrest of journalists Mahmoud El Sakka and Amr Badr, who work for opposition website Bawabet Yanayer. The journalists were detained over allegations of inciting anti-government protests, in response to the administration's decision to transfer two Red Sea islands to Saudi Arabia.

The interior ministry denied that there was a raid, insisting that only eight officers were involved, and that they had not used force. Egypt's prosecutor general has imposed a gag order on the investigation.

"We are here today to defend journalism," said the head of the journalists' union Yahia Kalash, cited by Associated Press. "We are defending the rights and the dignity of journalists."

The government of President Abdel-Fattah el-Sissi has faced a number of demonstrations recently, triggered by its decision to transfer the Red Sea islands. El-Sissi's policy to crack down on dissent hasn't stopped the confrontation.

Egyptian riot police blocked access to the site for non-union members, including some residents and those on work errands in the surrounding area. Several dozen journalists tried to break through the cordon to join the protest, showing their identification cards and claiming they were denied entry despite their union membership.

"There are thugs here threatening us, and the police don't want us to enter for the meeting because they know we'll condemn the Interior Ministry," said journalist Ahmed Bakr, who eventually managed to get through the barrier.

The union's primary demands are the release of the detained journalists, an official apology by the president, and removal of the interior minister. The reporters threatened to go on strike and boycott all statements coming from the ministry if the government didn't comply.

The government of El-Sissi, who lead the 2013 military overthrow of Egypt's Islamist President Mohammed Morsi, has since been suppressing political demonstrations by primarily Islamist opponents seeking the reappointment of Morsi.

Hundreds of protesters have been killed and thousands detained over the past three years. An unprecedented anti-protest law has virtually banned all street demonstrations, without prior authorization by police.

Putin: Egypt Still Has 'a Lot to Do' to Make Russian Tourists Safe

Egypt Deploys Army to Sensitive Sites Ahead of Mass Protests

Kerry: US to Cooperate With Egypt for Better Security, Economic Conditions