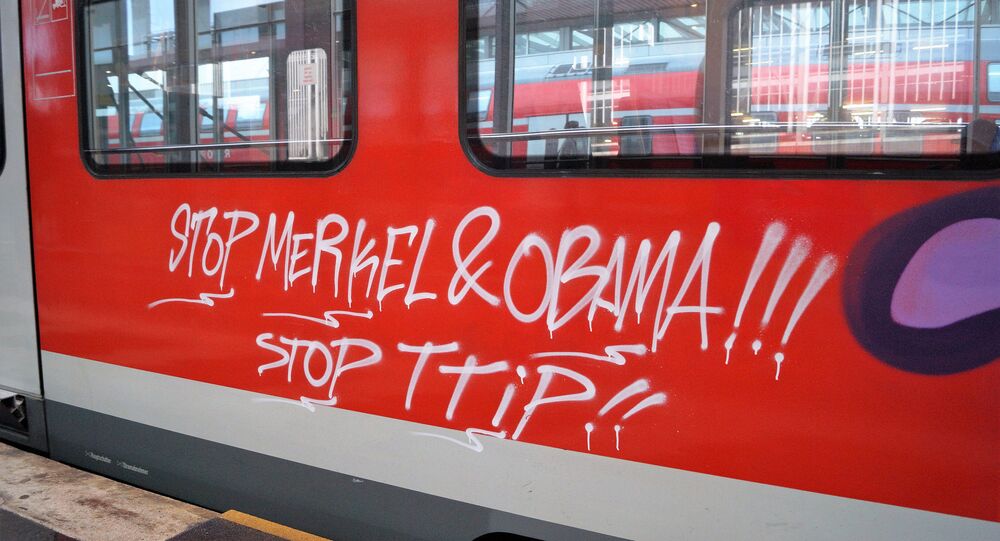 The Trans-Atlantic Trade and Investment Partnership deal (TTIP) would, if ratified, create the biggest trade partnership in the world, merging the whole of the EU with the US, in a common partnership of heavily deregulated trade.

For that to happen, however, the parties must agree on many issues, including food ingredients, genetic modification, and environmental and health issues. The document's release by Greenpeace reveals that the US is pushing its regulatory conditions on EU member states. The  sovereign nations of the EU have stricter controls over many aspects of public health, including food safety.

"The European Union has had very strong standards for protection of the environment, public health and the safety of our food." Flowers said, "And so it's surprising to see, through these negotiating texts, that they are willing to weaken those standards tremendously, and basically make them ineffective, and allow corporations to challenge them, and have a legal authority to supersede those regulations if they interfere with their profits."

© AFP 2021 / Philippe Wojazer
France to Reject EU-US Trade Accord at Current Stage of TTIP Talks
There were concerns internationally long before it was widely known that food safety and other product regulations in Europe are very different from those in the US. For instance, the EU uses the so-called "precautionary principle," meaning that before a product is put on the market, there must be evidentiary proof that the ingredients are safe for public consumption and for the environment. In the US, the approach is precisely the opposite, allowing corporations to freely market products with little or no regulation, and, if it is thought that there is a health risk, the onus is on the public to prove that a problem exists.

When countries gathered during the 2015 Paris climate talks to establish environmental guideline criteria, the resulting regulations were viewed as weak. Behind closed doors, however, power brokers in the same countries sign agreements that eliminate or deregulate the rules for polluters, Puryear noted.

"One thing about the secrecy that we must know is, how many European countries have said they would never negotiate over these issues, and how many of them, now, are clear they were negotiating over this," he said. "The reality is, they were completely lying about the scope of the negotiations and how they existed."

According to Flowers, the most outrageous aspect of these agreements is the amount of power that would be given to corporations to influence member-state legislation to their own benefit.

© AP Photo
Obama: No TTIP Without EU Membership; British Voters: Do You Promise?
Flowers observed that the TTIP allows for corporations to take member-state governments to a secret tribunal to prevent or limit legislation that could interfere with projected profits. At such a tribunal, corporate lawyers would serve as judges, to adjudicate sovereign rights behind closed doors.

"This is a very anti-democratic, a very non-transparent process that is completely rigged to benefit the corporations and prevent our government from being able to protect the health and safety of people and protect the environment or deal with the climate crisis," she explained. "As we know, the climate agreement in Paris is a voluntary agreement, but the TPP and TTIP are binding agreements that give corporations the power to supersede our own laws."

Puryear added that the popular perception, promoted by many Western media outlets, of TTIP opponents as isolationists and nationalists, is wrong. The vast majority of opposition to profit-above-people trade deals comes from communities seeking "sustainable relations…that respect the rights of workers and the environment."

"We are in a serious crisis of democracy, corporate power vs people power," Flowers stated. "What's really amazing and wonderful is that people around the world are really joining forces and working together across borders, because we all want justice."