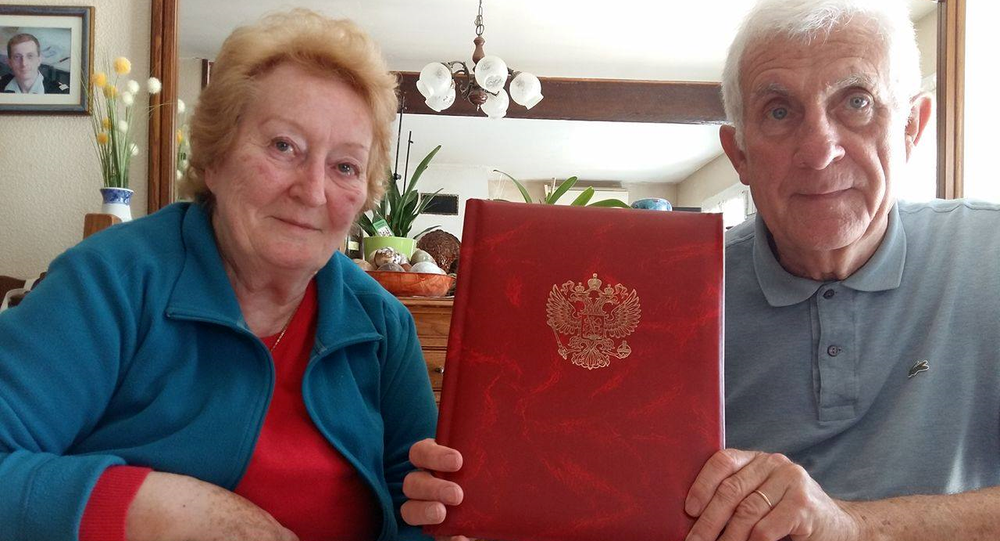 The Magues, a retired French couple who gave their WWII-era medals to the family of a Russian officer killed in Syria, say that they were "stunned and very moved" to receive an invitation from Vladimir Putin to visit Moscow on May 9. Speaking to Sputnik France, the couple said that a very personal motive compelled them to make the generous gesture.

"We were stunned, and very moved. We did not expect that our gesture, which came from the heart, would have such consequences," the couple said, commenting on the Russian president's invitation to attend the Victory Day Parade in Moscow on May 9.

Earlier, the Magues sent two WWII-era military medals belonging to their family, along with a letter of gratitude, to the Russian ambassador in France, asking him to forward the medals to the family of Alexander Prokhorenko, the Russian officer who died in Syria during the liberation of the ancient city of Palmyra from Daesh terrorists in March.

In response to the poignant gesture, President Putin sent the couple a personal invitation to visit Moscow on May 9, and said that he would like to meet them personally.

© Sputnik
The text of Vladimir Putin's invitation to the couple to attend the Victory Day Parade in Moscow on May 9, celebrating the 71st anniversary of the defeat of Nazi Germany in World War II.
© Photo : Twitter/@AlphaSpecnaz
Heroes Among Us: Russian Officer Killed in Palmyra Proves 'Courage is not Fiction'
In addition to thanks from the president, the couple say that they had been inundated with an avalanche of gratitude, both from Russia and across Europe.

Everything began in late March, when Russian media announced the death of Prokhorenko, a young officer serving in Syria, who called in airstrikes on his position when it became clear that he had been surrounded by Daesh militants outside Palmyra.

In their letter to the Russian ambassador, the Magues complained that the story hadn't been covered in French media. However, the couple's act of generosity soon made up for that, and their story quickly spread around the world after it was revealed that they would send the National Order of the Legion of Honor (the highest French order for military and civil merits) and the War Cross 1939-1945, medals bestowed on two members of their family for their feats of heroism in the Second World War.

Speaking to Sputnik, Jean-Claude and Micheline Mague explained why Prokhorenko's story struck a chord with them. "We remembered our own son, who was killed in Sarajevo, in Bosnia, although he did not die on the battlefield. We learned of his death just like that, by a phone call."

© Flickr / Sunny Ripert
Heroes Among Us: French Couple Sends Family WWII Medals to Wife of Russian Soldier Killed in Syria
The couple explained that as soon as they heard the news about the Russian officer's death, they immediately thought about his family, about his parents and his pregnant wife, who they imagined would be suffering from "the most complete anguish." "Why isn't anybody talking about this?" the couple asked themselves.

And so, they decided to send the Prokhorenkos the most valuable thing they had: two war medals received by their relatives for service in the Second World War.

The medals, they explained, aren't the only ones in their family's collection, but carry a special significance. The Legion of Honor medal was awarded to Micheline's uncle. "He was my godfather, and I loved him very much," she noted.

A radio engineer and a member of the 'Alliance' resistance group, the uncle had been captured by the Gestapo and deported to Buchenwald at age 17. Unlike his commander, who jumped out of the rail car on the way to the concentration camp, he stayed, "fearing retaliation against his family."

The War Cross belonged to Micheline's father, a bomber pilot, who answered General Charles de Gaulle's legendary appeal of June 18, 1940 to continue the fight against the Nazi German occupation after France's capitulation.

© Sputnik
From the Magues' archives: a personal letter of gratitude from Charles de Gaulle for relatives' wartime heroism.

With the Magues spending part of their careers in the military, their son too would follow in his family's footsteps, becoming a captain in the French Army's engineering forces.

"When my son would jump on my lap, it would be to a military march," Micheline recalled. And there was always a connection with Russia, she added. While he was serving in the Western Sahara, a Russian officer presented her son with his cap.

© Photo : Twitter/@AlphaSpecnaz
Servicemen Around the World Praise Heroism of 'Russian Rambo' Who Died in Palmyra
After making their generous gift, the couple was swamped with letters of gratitude, coming in from France, Belgium and Russia, and even translations of Russian newspaper articles. Others followed in the Magues' footsteps, sending money or even medals to the Prokhorenko family.

Admirers of classical Russian writers and musicians Leo Tolstoy, Sergei Eisenstein and Alexander Borodin, the Magues will soon get a chance to discover another side of Russia, something they said was completely unexpected.

"We just put ourselves in the place of the parents who lost their 25-year-old son, who felt the same pain we did when we lost ours. And that was it. We did not want anything else, not politics or anything else."

Now, they have been invited to Victory Day celebrations on May 9. For the couple, who has lived in the small southern French town of Florencsac for 20 years, the invitation carries with it a special significance. All stories overlap, Jean-Claude Mague reasons, but "one fine day, all wars will end."