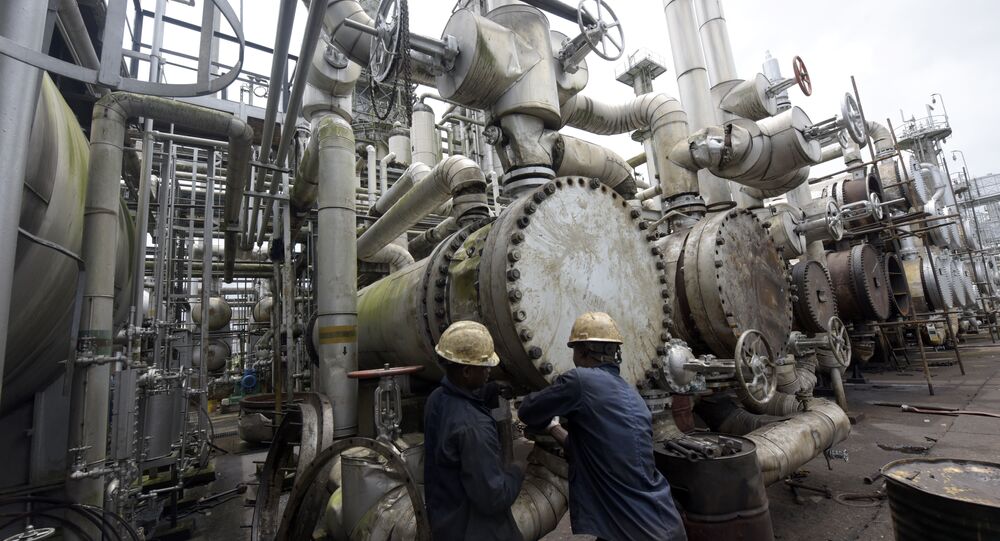 While talks between the world's 17 top oil producers in Doha to address the supply glut have collapsed, a series of unplanned shortages among OPEC and non-OPEC suppliers has supported the oil price, analysts told Bloomberg.

© AP Photo / Hasan Jamali
Oil is the Most Likely Candidate to Rattle the US Economy
Outages at oil production facilities in Africa and South America amid political instability have lessened the impact of the current oil supply glut, analysts told Bloomberg.

Talks between 17 OPEC and non-OPEC petroleum producers aimed at agreeing upon a production freeze collapsed on April 17 after Saudi Arabia reportedly demanded that producers who were absent from the meeting, such as Iran, participate in the deal.

Despite the meeting's failure, the current daily 1.5 million barrel crude oil surplus is being curbed by outages in oil-producing countries such as Nigeria, Colombia, Libya and Iraq.

"The fact of the matter is that the oversupply in the market is very narrow," Ed Morse, head of commodities research at Citigroup, told Bloomberg.

"The world has become highly prone to disruptions of supply in vulnerable petro states."

In Colombia, attacks by guerrilla rebels have disrupted supplies, and the country's daily crude exports declined to about 622,000 barrels in March, down 14 percent from a month earlier.

Disruptions to production and transportation in Nigeria, some a result of pipeline sabotage, have caused production there to decline to 1.7 million barrels a day, the country's lowest production level since 2009.

© AP Photo / Hussein Malla
In this March 5, 2011 file photo, an anti-government rebel sits with an anti-aircraft weapon in front an oil refinery, after the capture of the oil town of Ras Lanouf, eastern Libya.
Power shortages caused production disruptions at several fields in Libya, where armed militias compete for control of oil fields and related facilities in the absence of a functioning central government.

Before the 2011 overthrow of Muammar Gaddafi, Libya produced about 1.6 million barrels a day, but it is now OPEC's smallest producer: in March, it supplied just 330,000 barrels a day.

© AFP 2020 / Andrew Caballero-Reynolds
Fear and Loathing in the Arabian Nights
Disrupted volumes in Iraq in March were largely unchanged from their February level; the pipeline carrying oil produced in northern Iraq to the Turkish port of Ceyhan was offline for almost a month starting in mid-February because of sabotage.

The pipeline has now resumed operation, but production from northern fields operated by Iraq's National Oil Company is still disrupted because of a political dispute between the central government in Baghdad and the Kurdistan Regional Government.