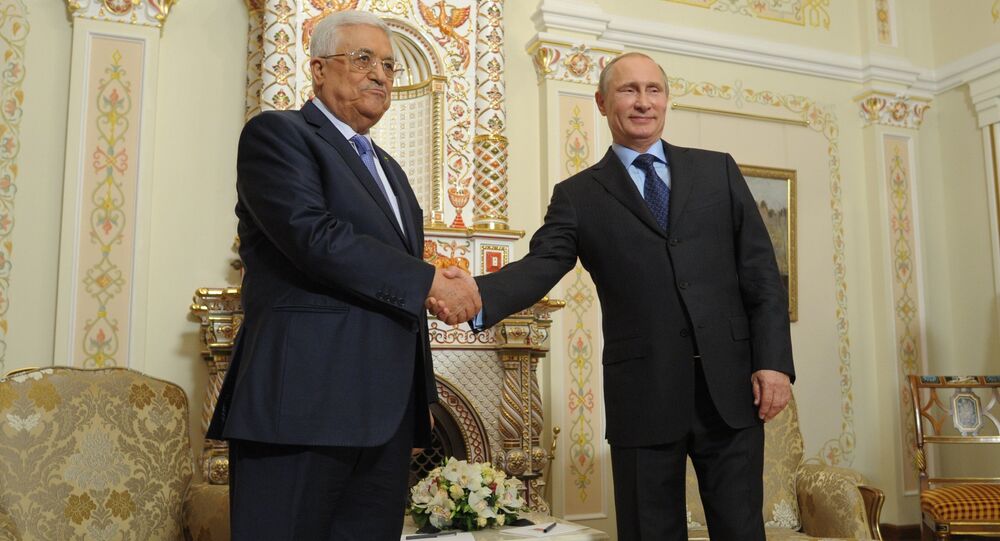 Sputnik spoke to the Palestinian ambassador, who said that Mahmoud Abbas is scheduled to meet with Vladimir Putin on April 18.

“Mahmoud Abbas will arrive to Moscow from Paris on April 17 to discuss with Russian President Vladimir Putin the development of bilateral relations, coordination in regard to the political developments around the Middle East crisis, since the negotiations between parties have been halted; a role that Russia can play in this issue," Nofal said.

Host Photo Agency
Abbas May Visit Moscow in Mid-April to Discuss Middle East Issues
According to Nofal, the two leaders are expected to discuss the French initiative to resume the stalled negotiations between Israel and Palestine to settle the conflict between them.

"Since the President will be arriving from Paris, where he plans to discuss the French initiative to hold an international conference on the Middle East crisis, Abbas will discuss with President Putin the French proposal," the ambassador said.

He added that Abbas would be accompanied by Palestinian Foreign Minister Riyad Maliki and chief negotiator Saeb Erekat during his Moscow visit.

© AFP 2021 / AHMAD GHARABLI
Moscow Calls New Expropriation of Land by Israel in Palestine 'Illegal'
Palestinians seek diplomatic and economic recognition for their independent state on the territories of the West Bank, including East Jerusalem, which is partially occupied by Israel, and the Gaza Strip. The Israeli government has so far refused to recognize the State of Palestine as an independent diplomatic entity.

In late January, then French Foreign Minister Laurent Fabius proposed an initiative to arrange an international conference to help resume the stalled Israeli-Palestinian talks. He stressed that Paris would be ready to recognize Palestinian statehood if the talks yielded no results. Israel has rejected the French plan.