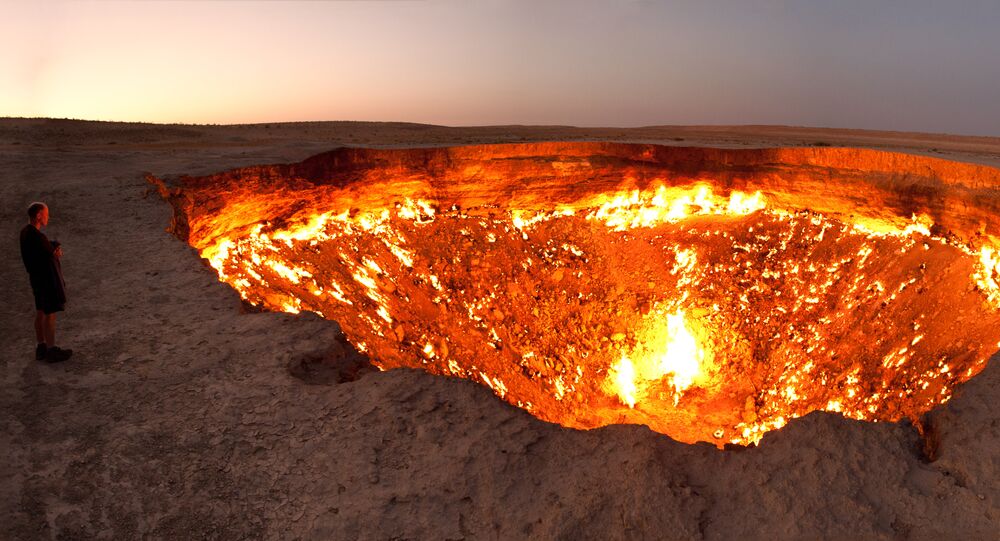 Into the Abyss: Explore Seven of the World's Most Interesting Craters

The world is pitted with cracks and craters, natural and man-made; here are seven of the most notable.

© Sputnik / Aleksandr Utkin
Development site of the "Mir" diamond pipe near the town of Mirny
The "Mir" diamond mine in Yakutiya is 525 meters deep and has a diameter of 1.2 kilometers; it was opened in 1955, following the opening of the Zarnitsa mine in Yakutiya in 1954, to meet the USSR's requirement for industrial diamonds. The open-pit mine produced about two million carats of diamonds annually, and closed in 2001.

© Photo : Wikipedia/Irene2005
Open-pit diamond mine (known as the Big Hole or Kimberley Mine) in Kimberley, South Africa.
The 500 meter-wide Kimberley Mine in South Africa, also known as the "Big Hole," was first excavated in 1871 during the Gold Rush on a farm owned by the De Beers brothers. Mining operations at the site ended in 1914 and it became a tourist attraction in the 1960s. In 2015 the De Beers Company sold its last remaining assets in the town of Kimberley, which was the center of the 19th century exploration frenzy. More recently, the name of the town has become associated with the 2003 process established to prevent the illegal sale of "blood diamonds."

© Flickr / Martha de Jong-Lantink
The door to Hell in Darvaza, Turkmenistan
The "Door to Hell" was created in 1971, when oil prospectors in the USSR drilled at a site close to Derweze, Turkmenistan, in the belief that oil was below the surface. When an oil rig collapsed into a large crater it transpired that the site contained natural gas, which geologists feared might poison the local population with its noxious emissions. In order to prevent the gas from spreading, the experts set it alight, with the unexpected result that the hole still burns today.

© Photo : Wikipedia/Federal Government of the United States
The Sedan Crater
The Sedan Crater was formed as a result of an underground nuclear test carried out on July 6, 1962 at the Nevada Test Site. It shot 12 million tons of earth into the sky and created a crater over 100 meters deep and 390 meters wide.

© Photo : Wikipedia/Philipp Weigell
The Incan agricultural terraces at Moray
Moray is an archaeological site in southeastern Peru approximately 50 km northwest of Cuzco, built by the Inca civilization. The construction consists of circular hollows linked by multiple staircases; the largest holes are approximately 150 meters deep, and it is thought that the Incas used them for agricultural research.

© CC0
Great Blue Hole. Belize
The Great Blue Hole is an underwater sinkhole off the coast of Belize, part of the Belize Barrier Reef Reserve System. The hole measures over 300 meters across and 125 meters deep, and is believed to be the largest of its kind. It was formed during several glacial events starting more than 150,000 years ago.

© Photo : Wikipedia/Júlio Reis
The multiple-ringed Vredefort Crater
The Vredefort Crater was formed when an asteroid struck Earth about two billion years ago; it is the largest verified impact crater on Earth, and is believed to have been about 300 kilometers across at the time of its formation.
...
Reddit
Google+
Blogger
Pinterest
StumbleUpon
Telegram
WhatsApp
193

Third Rock From the Sun: Earth's Beauty Viewed From ISS