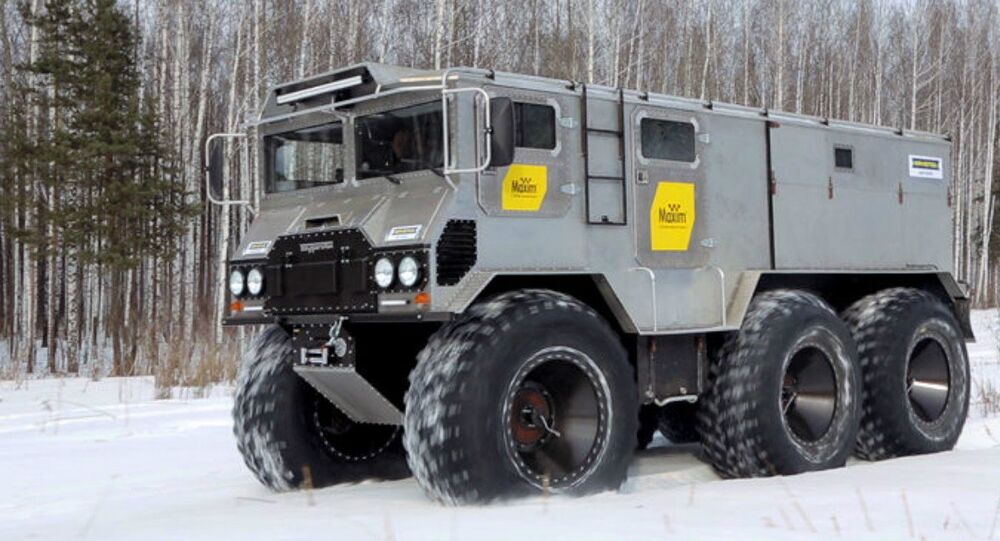 A sophisticated amphibious vehicle capable of reaching the North Pole autonomously is now available in Russia, according to the news website Moya Planeta.

© Photo : bastion-opk.ru
Russia's Brand New Arctic Tanker to Plough the Seas in April
Russia has manufactured a unique off-roader for the Arctic Region; it plans to break a world record by reaching the North Pole with the help of the the amphibious vehicles, which will be the first to be capable of driving there in an autonomous mode, the news website Moya Planeta reported.

The four-ton Burlak vehicle was built in line with the concept of the Soviet-made amphibious armored personnel carrier BTR-60 and there's nothing like it in the world, designers said. The vehicle is more than six meters long, 2.9 meters wide and 3.2 meters high. The diameter of the wheels is 1.75 meters, according to the website autoarctic.ru.

Remarkably, the design of the six-wheel Burlak combines standard reliable components with unique new parts. For example, while the vehicle shares some components with the BTR-60 and Toyota Land Cruiser SUV, the Burlak's designers created the transmission and power transfer case on their own. The low-pressure tires were specially produced in China.

Among other things, the Burlak is equipped with four sleeping sections and a kitchen with gas burners for cooking, as well as a station for washing hands and a shower. It's possible to maintain a comfortable temperature inside the vehicle by regulating the engine's heat.

The tests of the Burlak vehicle are due to be held near the Kara Sea, part of the Arctic Ocean; a team of researchers is already on its way to the area. The automotive trans-Arctic expedition, which hopes to break a world record, is scheduled for 2018.

US-Russia Cooperation in Arctic Remains Successful - US Envoy for Arctic