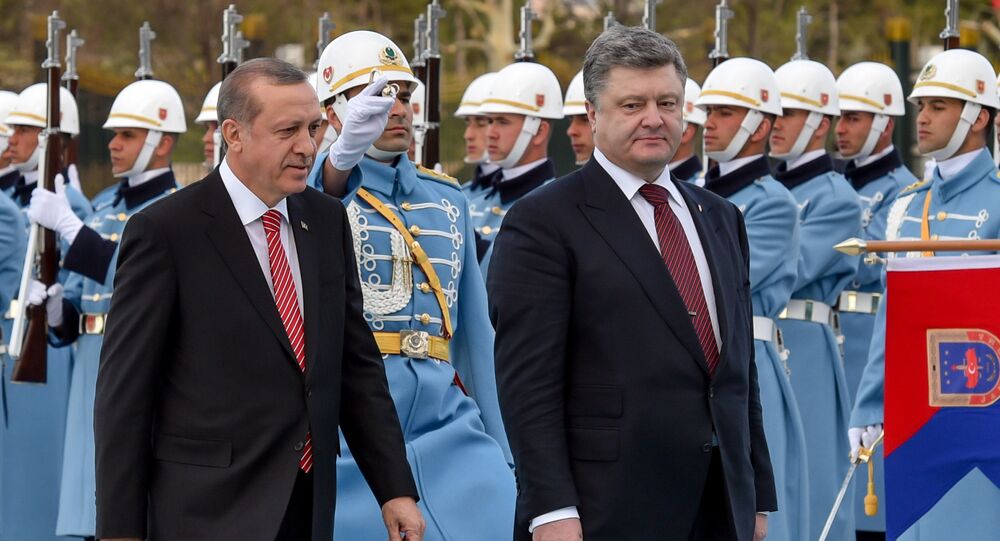 Stratfor has offered its analysis of the results of the Ukrainian president’s trip to Ankara earlier in March, calling it a ‘direct reference to Russia’ with which both countries have very strained relations, however forecasting that a full-fledged alliance between Kiev and Ankara remains ‘unlikely’.

© AFP 2020 / SERGEI SUPINSKY
Ukraine, Turkey Sign Agreement on $50Mln Loan to Kiev
Stratfor, an American private geopolitical intelligence firm,has offered its analysis of the Ukrainian president's visit to Ankara on March 8-9 and the announced results of the bilateral talks.

Petro Poroshenko was in Ankara for a high-level strategic cooperation council meeting as the guest of Recep Tayyip Erdogan, only three weeks after Turkish Prime Minister Ahmet Davutoglu paid a snap visit to Kiev.

On the same day as Davutoglu was in Kiev to hold talks with Ukrainian Prime Minister Arseniy Yatsenyuk, Ukrainian Chief of General Staff Viktor Muzhenko met with his Turkish counterpart Gen. Hulusi Akar, in a sign of intensified military and defense relations.

After the chain of meetings the two countries announced that they had signed a number of political, economic and military deals.

“Geopolitics often makes for strange bedfellows, and at times countries with little in common politically or culturally still form agreements and alliances that make strategic sense,”  Stratfor notes in its analytical piece on its website.

© AP Photo / Lefteris Pitarakis
The Enemy of My Enemy is My Friend? Turkey, Ukraine Creating Military-Political Alliance in Black Sea
However it further elaborates that the statement was “a direct reference to Russia”, with which both have strained relations after Turkish downing of a Russian warplane in Syria and over the military conflict in the east of Ukraine.

The analysis further reviews the possible areas of cooperation between Kiev and Ankara, such as, for example,  joint cooperation in the Black Sea.

“Each is located on the Black Sea, which also happens to be the site of one of Russia's largest military buildups over the past two years,” it says, noting that the recent developments such as the reunification between Russia and Crimea and the expulsion of the Ukrainian military forces from the peninsula have “put Ukraine at a strategic disadvantage, forcing Kiev to remove its naval assets from its major base in Sevastopol (or lose some of them entirely) and relocate to a smaller naval base in Odessa”.

© Photo : Youtube/PressTV News Videos
ISIL Militant Admits to Buying Arms in Ukraine, Sending to Syria Via Turkey
“Though few specific details were announced on the security agreements struck between the two countries, a joint declaration did reveal that Ukraine and Turkey intend to strengthen security in the Black Sea and increase cooperation with each other and with NATO,” it suggests.

Another possible area of cooperation, the analysis suggests, is that the two can try to play the Crimean Tatars ‘card” in Crimea in an attempt “to reclaim the peninsula from Russian military forces.”

However it further calls it an “unrealistic goal”.

“Any Ukrainian and Turkish military cooperation is likely to be limited as the two countries primarily focus on their respective conflicts in eastern Ukraine and Syria, which are entirely distinct in terms of both geography and tactics,” it states.

But Stratfor still leaves room for some “security ties and defensive alignment with each other, at least for now”.