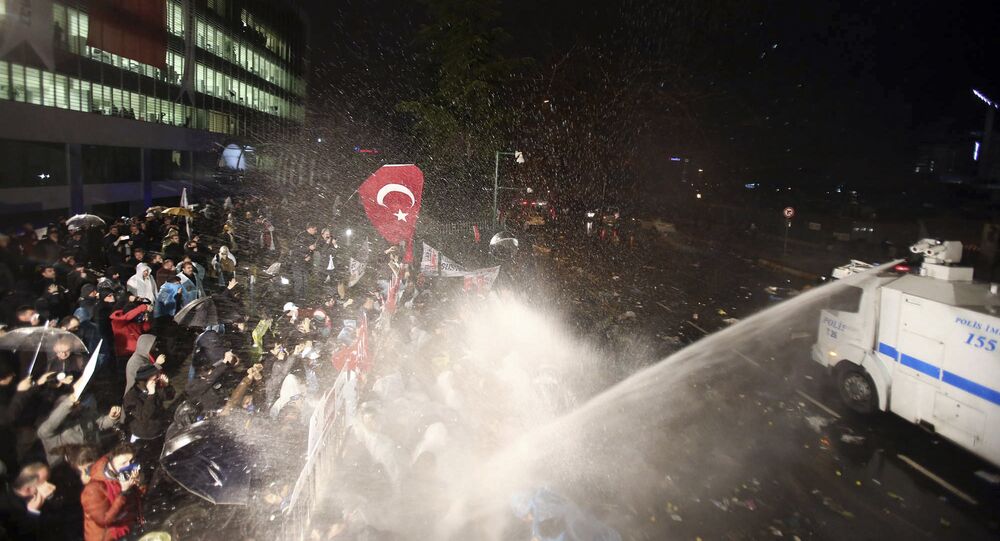 Beyond the Pale: Canadian Press Urges Abandonment of 'Totalitarian' Turkey

The time is ripe for Ankara's allies to back away from Turkey, which has "crossed the moral red line into acts of genuine totalitarianism," according to one of Canada's leading English-language newspapers, The Globe and Mail.

© Sputnik / Sergey Guneev
Erdogan's 'Ottoman Ambitions' Stopped by Failure to Achieve Goals in Syria - Assad's Aide
Ankara's allies should turn away from a close cooperation with Turkey, which should be treated as a country that has "stepped beyond the pale" and "crossed the moral red line into acts of genuine totalitarianism," Globe and Mail columnist Doug Saunders wrote.

He pointed to Turkish authorities' crackdown on the offices of the independent-minded daily newspaper Zaman earlier this month, when police fired tear gas on protesters denouncing the state takeover of the media holding which owns the daily.

Saunders slammed the clampdown as "part of an unprecedented campaign to shut down or seize control of all forms of political, bureaucratic and media opposition," in what is allegedly aimed at Turkish President Recep Tayyip Erdogan reining in the Islamist and Kurdish movements.

"Erdogan claims they are security threats, but in practice, these crackdowns give him absolute executive power by eliminating all institutions of democratic and popular dissent," he said.

© REUTERS / Sertac Kayar
Turkey Traps: 'Ankara Wages Psychological Warfare Against Kurds'
He mentioned that more than 1,800 people that have been arrested in the past year on charges of "insulting the president," something that Saunders said runs counter to principles of democracy.

As for Ankara's campaign against the opposition, it "went into high gear" late last year after Erdogan's Justice and Development Party won a majority in the national election, according to Saunders. He recalled that at the time, several moderate media outlets were shut down.

He also said that Erdogan won the November 2015 election "on a fear campaign aimed at Turkey's Kurds," who make up about a fifth of the country's population.

"They became threats to his goal of gaining an absolute majority he could use to rewrite the Turkish constitution and make himself president for life," Saunders said.

© REUTERS / Tolga Bozoglu/Pool
Feeling the Pressure: Erdogan 'May Become Even More Isolated'
Referring to Kurds, he blamed Erdogan for "bombing his own citizens aggressively…strictly because they threatened his own grandiose political ambitions."

By doing so, "Erdogan has destroyed the unified and open Turkey he earlier helped to create," Saunders pointed out.

"And he has done so using the tools not just of authoritarianism but now, by silencing the media, of totalitarianism," Saunders concluded.