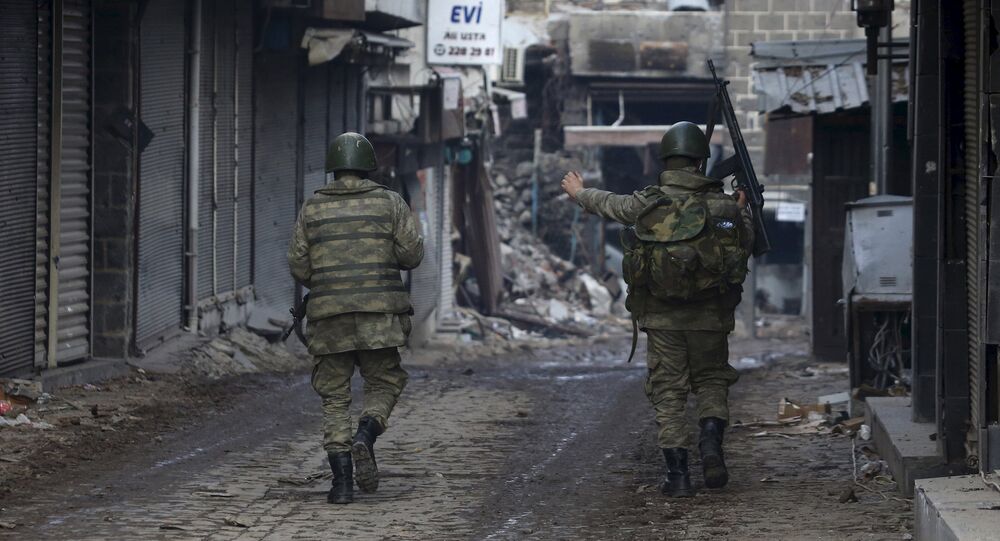 Despite Ankara's ongoing crackdown on Kurds, the international community has preferred to ignore the problem, according to Kani Xulam, a Kurdish activist and director of the American Kurdish Information Network.

The interview came after the Turkish government declared indefinite 24-hour curfews for two more mostly Kurdish-populated towns in the country's east. Media reports said that dozens of trucks carrying Turkish security forces are heading to the towns of Yuksekova and Nusaybin.

"We expect a confrontation that will most likely turn Yuksekova and Nusaybin into ghost towns, which will be leveled to the ground. Unfortunately, the international community is turning a blind eye to this issue as a NATO member wages a merciless war against the [Kurdish] civilian population," Xulam said.

He also drew attention to the fact that members of Turkey's Kurdish minority are fighting for their country to treat them as equals, while Ankara is struggling to maintain Turkish supremacy over the Kurds.

"It is racism at its core, yet no one has accused Turkey of apartheid, regrettably," he pointed out.

Meanwhile, the Governor of the province of Yuksekova was quoted by Turkish media as saying that entering and leaving the city would be banned to "ensure the physical and material safety of citizens amid increasing incidents of terrorism."

In summer 2015, Turkey initiated a military campaign against the Kurdistan Workers' Party (PKK) in the country's southeastern regions, which are mostly inhabited by Kurds.

Since the beginning of the campaign, Ankara has imposed several round-the-clock curfews, preventing civilians from fleeing regions where the military operations are taking place.

© AFP 2021 / ILYAS AKENGIN
Turkey's 'Hidden War' Against Kurds May Be Deadlier Than Syria
At least 198 civilians, including 39 children, have been killed in military operations in the area since August 2015, according to the Human Rights Foundation of Turkey.

The Kurds have been instrumental allies of both Russia and the US-led coalition in fighting Daesh, both in Syria and in neighboring Iraq. However, Turkey fears their ascending power amid its ongoing conflict with the PKK. Their political message, formulated by jailed PKK leader Abdullah Ocalan, calls for greater Kurdish autonomy, women's rights and respect for the environment.