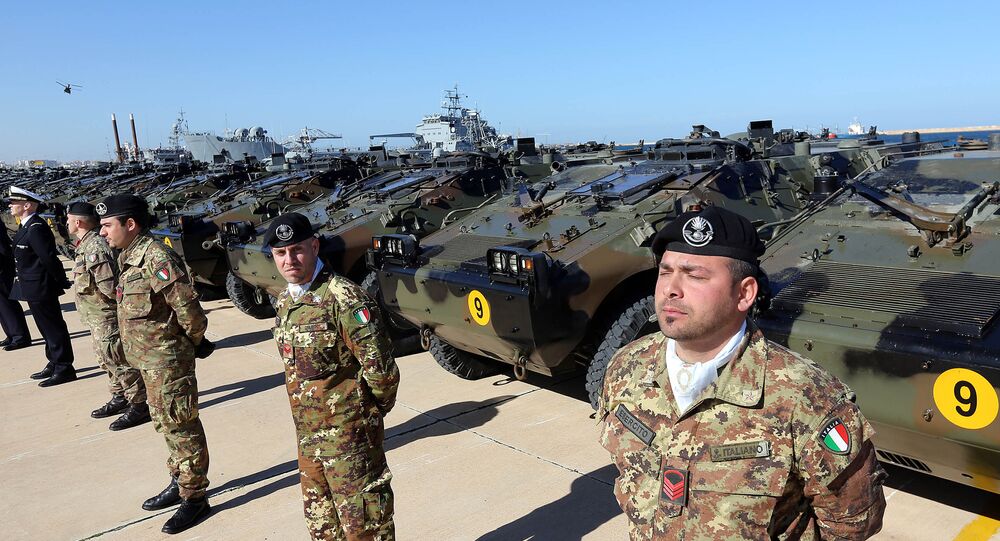 Recently it was reported that Italy was ready to send its special forces to Libya to fight against Daesh terrorists.

© AP Photo / Mohamed Salama
Italian FM Says No Need for 'Blitzkrieg' in Conflict-Torn Libya
According to the Italian newspaper Corriere della Sera, a secret document on the operation was adopted on February 10. Italian troops are expected to join US, French and British special forces that have been operating in Libya for several weeks.

With the first Italian unit ready to deploy to Libya within 10 days there are still doubts about the goal and the legitimacy of the mission, an article in La Repubblica read.

The documents underscored the "certain necessity" for the operation, but the bureaucratic notion hides one of the most difficult problem for the Italian military.

"There is a feeling that countdown to combat actions has started in the Mediterranean," according to the article. "It seems like the tragic death of Fausto Piano and Salvatore Failla [two Italian hostages killed by militants in Libya] is calling for a large-scale operation."

However, there are doubts about the initiative. The first problem is the legitimacy of the operation. In order to send Western troops to Libya, an authorization of its government will be required. Furthermore, what is the goal of the operation – to raze the caliphate or to help the Libyan Army?

"And the principal question — what is that national interest Italy wants to protect?" the author pointed out. "There is danger that Italy could once again be dragged into war with the only purpose – not to lose its allies."

Of course, the operation in the making is the largest Italian military operation since 1943. According to different estimates 3,000 to 7,000 troops will be deployed to Libya, with a third of them sent by Italy. The deployment may take up to one month, but the first troops may be deployed within 10 days, to take control over the airfield.

© AP Photo / Mohamed Salama
Italy Ready to Send 50 Special Forces Servicemen to Libya to Counter Daesh
So far, it is safe to say the mobile unit of the Aqua division will be involved in the operation, according to the article. Last week, The Supreme Defense Council comprising the head of state, key minister and military commanders held a meeting at the Quirinal Palace and decided to start preparing troops. Then, at the Centocelle airfield in Rome the preparation of personnel began.

According to La Repubblica, at zero hour there will be two options: to deploy troops to Libya from the Centocelle airfield or – if it is safe – from Tripoli.

In addition to Italian forces, mobile units from other countries will also be deployed. Some countries like Britain are actively involved in the initiative while others – for example, Germany and Spain – are now evaluating the risks and considering their roles. Small countries have offered some specialized assistance. The US would provide contacts with its Mediterranean forces, including warships, aviation and special operations units. The Sigonell airfield will play the key role during the mission.

© Photo : U.S. Air Force
Italy Becomes Base for Armed US Drone Operations in Libya
The troops will receive support from the navy, currently at least one helicopter carrier of San Giorgio class. It will carry the San Marco marine battalion with their armored landing vehicles. The marines will serve as reserve forces, or reinforcement for ground troops in emergency situations. A supply ship is also expected to be deployed for the mission. The operation will also receive aerial protection, from the Trapani airfield in Sicily.

The number and branch of forces will depend on the type of the operation, the article read. If an agreement is reached to establish a united Libyan state the mission will be long-term and will require at least 5,000 personnel. Such a force will be enough to secure infrastructure facilities in Libya, including ports, airfields and oilfields. It will also contribute to forming the national army.

According to the article, if the mission is only aimed destroying the caliphate 3,000 troops will be enough, including 200 special operations personnel and a squadron of Mangusta combat helicopters. According to this scenario, the operating base may be deployed in Tunisia which has already been authorized for British forces.