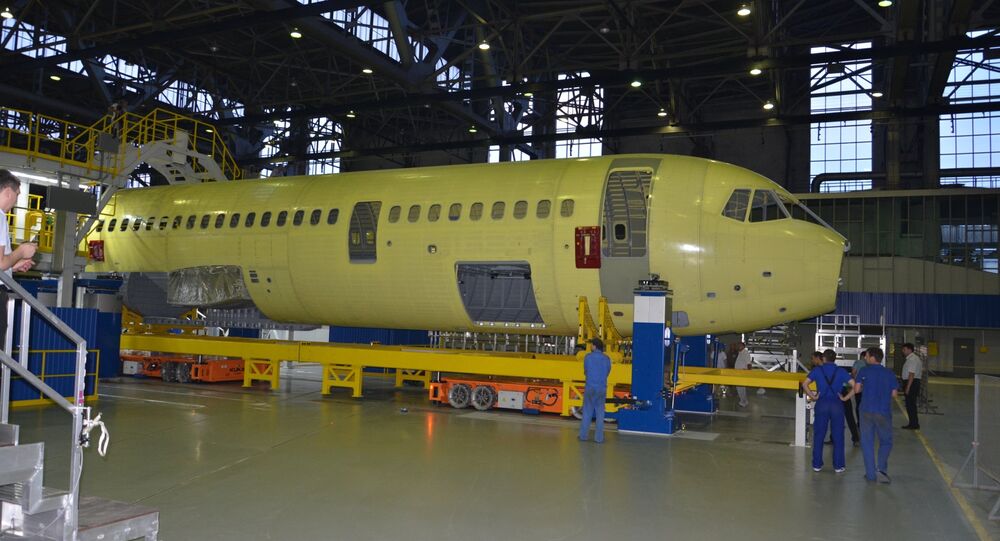 Russia's creation of the advanced MC-21 passenger jet indicates that the country has managed to outstrip the United States in terms of aircraft construction, according to the website Japanese Business Press.

© Flickr / SuperJet International
Russia Discussing Sale of Up to 40 Sukhoi Superjet 100 Planes to EgyptAir
Russia's creation of a state-of-the-art passenger jet, the MC-21, is an indication that it is outperforming the United States in terms of aircraft construction and development, Kotaro Watanabe wrote in an article for the website Japanese Business Press.

According to Watanabe, Russian aircraft manufacturers have managed to succeed in accomplishing what Boeing and Airbus failed to do, namely, the creation of an airplane wing with the help of inexpensive new technology.

Watanabe recalled that the MC-21's wings and tail are made of carbon composite materials, which "signals an attempt to successfully compete with the most advanced passenger planes, including the US's Boeing 787."

The expert specifically drew attention to the fact that the production costs of the MC-21's main components were significantly lower than those of Boeing 787 jets.

Earlier, it was reported that the MC-21 is expected to cost 70 million dollars, in contrast with the Airbus A320 (102.8 million) dollars and Bombardier CS300 (80 million dollars).

© Sputnik / Alexey Kudenko
Russian Super Airliner MC-21 to Plough the Skies in 2016
The narrow-body MC-21 jet, which is manufactured by Irkut Corporation and is already being touted as "the airliner of the 21st century", will replace older Russian airlines, including the Tupolev TU-154 and TU-134.