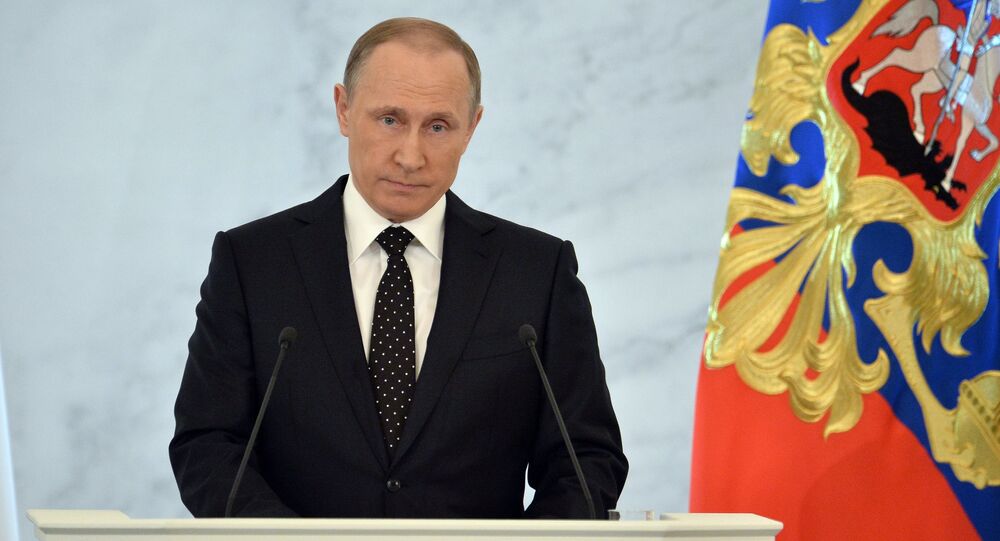 The supreme commander noted that "the duties of the Russian Air and Space Forces' pilots, of our sailors and servicemen deserve the highest praise."

"They are helping the Syrian army and other forces fight terrorists in very harsh conditions, protect civilians from violence and hostilities," Vladimir Putin said.

The president underscored that by battling terrorists in Syria, Russian forces are protecting their own country's interests as well.

"By fighting in this Middle Eastern country, our soldiers and officers are protecting the interests of the Russian Federation, destroying militants who openly name our country their enemy and do not hide their plans to expand, including to the territory of Russia and the CIS," he said.

Russia has always sought to solve any disputed issues through political and diplomatic means, including in Syria, Russian President Vladimir Putin said Saturday.

"We have always sought to resolve any disputed issues solely through political and diplomatic means, we have repeatedly contributed to stabilizing the situation in different countries, helped resolve serious conflicts," Putin said.

Since 2011, Syria has been mired in a civil war with forces loyal to Syrian President Bashar Assad fighting a number of opposition factions and terrorist groups, including Daesh (ISIL/ISIS/Islamic State) and al-Nusra Front, both outlawed in Russia.

Russia has been conducting airstrikes against terrorists in Syria at the request of Assad since September 30, 2015. Besides supporting Assad as the legitimate Syrian authority, Moscow is contributing to finding a political solution to the Syrian crisis, including mediating intra-Syria talks and helping to organize international meetings on the issue.

On Friday, Kremlin spokesman Dmitry Peskov reiterated that Moscow "is proceeding from the position that there is no alternative to a political solution" to the Syrian civil war.