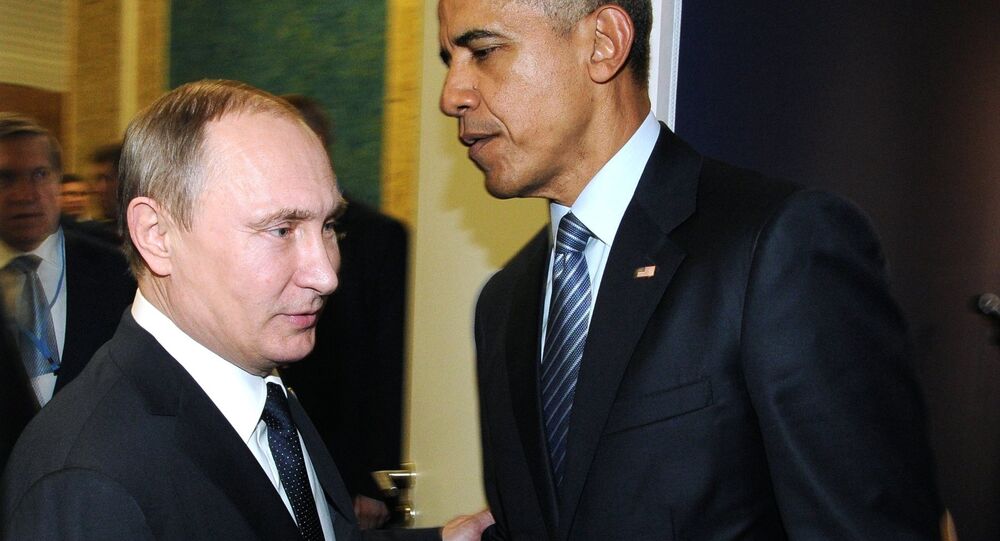 Commenting on Barack Obama’s recent statement that “Russia’s involvement in Syria won’t solve the problem of stabilizing Syria”, Professor Stephen F. Cohen noted that the US head of state might have somewhat of “a bee in his bonnet about Putin” which greatly impedes his vision of reality in Syria.

© Flickr / Zedorwin
Russian Roulette: US Risks Turning New Cold War Into a Nuclear One
“Yes, Russia is a major military. Obviously, a bunch of rebels are not going to be able to compete with the hardware of the second most powerful military in the world. But that does not solve the problem of actually stabilizing Syria. And the only way to do that is to bring about some sort of political transition,” the US president said this week at the US-ASEAN Leaders Summit at the Sunnylands Center in Rancho Mirage, California.

The comments referred to the Russian air campaign in Syria against the Daesh militants.

Commenting on the statement that Russia's involvement in Syria isn’t actually helping the situation, Stephen F. Cohen, professor emeritus of Russian studies at New York University and Princeton University said that such a vision of a reality in Syria is purely due to President Obama’s personal attitude towards the Russian president.

Cohen put forward his own view of what is happening on the ground.

© AFP 2021 / MUSTAFA OZER
'Heading to WW3': Will US War Party Authorize Turkish-Saudi Military Adventure in Syria?
“Russia and the US are not going to put combat troops on the ground in Syria. You can’t finish off Islamic State (Daesh) in Syria — no matter how much bombing the Russians and the Americans do — without ground forces,” he suggested

“There is one ground force capable of doing that and that’s the Syrian Army. This is not my opinion. General [Martin Edward] Dempsey, who is the former Chief of Staff, told Obama that he, Dempsey, agreed with Putin that you had to protect the Syrian Army. The retired head of the British General Staff said two days ago “Putin is right, we’ve got to protect, bolster the Syrian Army.”

“President Obama has a bee in his bonnet about Putin and he keeps denying this reality,” Professor Cohen therefore stated.

The expert also commented on the negotiations between Secretary of State John Kerry and Russian Foreign Minister Sergei Lavrov on the Ukrainian and Syrian crises, calling them two “Cold Wars” which have all the potential to develop into hot war fronts.

© Sputnik / Dmitriy Vinogradov
Russia's Success in Syria Contributes to Anti-Daesh Victories in Iraq
“One, of course, is in Ukraine, the other is in Syria,” he acknowledged.

The professor explained that there is plan to negotiate an end to the Ukrainian civil war, put forward by the French and by the Germans. Secretary Kerry backed it and worked very hard to get that to come to the negotiating table.

“He has not gotten there yet – there is a lot of resistance,” the professor said.

The same is true regarding Syria, he added. There is a proposal, which came forward after the terrorist attacks in Paris by French President Francois Hollande, saying that there should be a grand coalition, which would include Russia, against Daesh (ISIS/ISIL). Kerry has been negotiating that with Lavrov.

© AFP 2021 / ILMARS ZNOTINS
Never in the Cold War Had US Put Its Military Force So Close to Russia
“But, I don’t share the position that we can be sure that President Obama is the dove in this case, because I assume that President Obama controls NATO and the Department of Defense,” Professor Cohen said.

“NATO and the Department of Defense have, basically, stabbed Kerry in the back. Every time he gets five feet closer to bringing about these negotiations, we end up with what we’ve just discussed – moving weapons to Russia’s borders.”

The last phrase comes in reference to Professor Cohen’s comments on the statement of US presidential candidate Hillary Clinton.

In the Democratic debate at MSNBC in Durham, N.H. on February 4, she claimed that Russia is “putting constant pressure” on US allies in Europe, “trying to move the boundaries of the post-World War II Europe,” and, also, “set European countries against one another.”

Professor Cohen has ruled this claim as an “entirely factually wrong.”

“Russia is not threatening any country on its border and is not turning European countries against each other. What Russia wants is a stabilized European Union,” he stated.