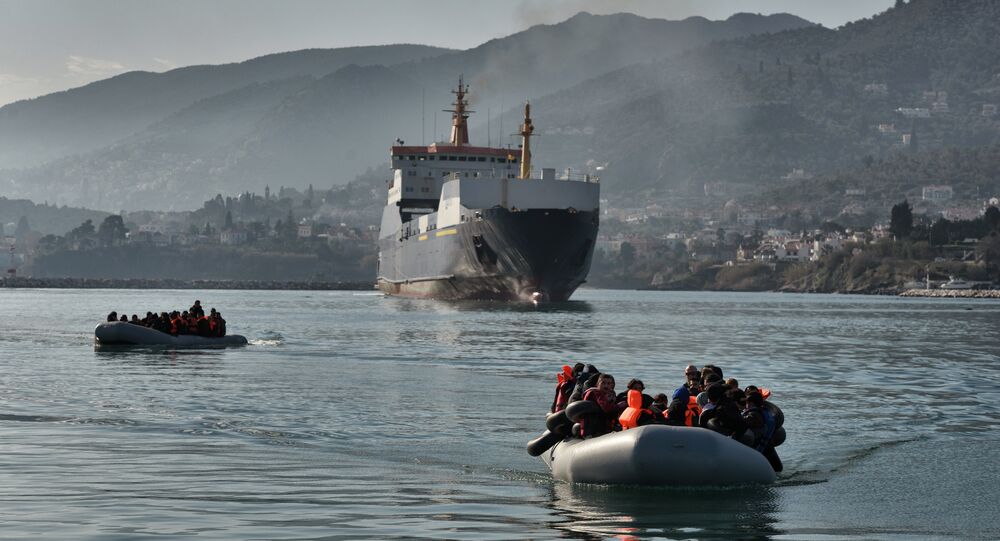 The countries of the EU are responsible for the ongoing civil war in Syria which prompted the escalation of the migration crisis in Europe, according to Greek lawmaker Mustafa Mustafa.

© AP Photo / Armin Weigel
Most Germans Believe Authorities Failing to Cope With Migration Crisis
In an interview with Sputnik's Turkish edition, Moustafa Moustafa, a left-wing Greek Syriza MP of Turkish decent, said that the EU's member states are responsible for the continuation of the civil war in Syria, which has ultimately added to the escalation of Europe's ongoing migration crisis.

His remarks came in response to recent calls from members of Germany's majority Christian Democratic Union (CDU) party to expel Greece from the Schengen area due to its alleged failure to protect the EU's external borders.

© AFP 2021 / Bulent Kilic
Migrant families - helped by rescuers - disembark on the Greek island of Lesbos after crossing with other migrants and refugees the Aegean Sea from Turkey, on November 25, 2015.

"First and foremost, the EU should focus on taking the necessary steps to stop the war in Syria instead of discussing Greece's protection of the EU's borders," Mustafa said.

According to him, the latest events indicated the EU's double standards on migrant-related policy.

"Those actions that we are now seeing are nothing but a search for a plausible pretext. The EU countries want to distance themselves from the problem, and are trying to lay the entire responsibility for the migration crisis on Greece," he said.

Mustafa blamed the EU for "turning a blind eye to the truth", saying that the migration crisis should be resolved by the whole of the international community, "otherwise we will not advance in its decision."

Earlier this week, lawmakers from the CDU argued that Greece must be excluded from the Schengen area amid the ongoing refugee crisis.

© AFP 2021 / ARIE KIEVIT / ANP
The EU of Broken Dreams: Why Refugees Feel Unhappy in Europe
They accused Greece of ignoring its responsibility to protect the external borders of the European Union. Refugees continue to flood into Europe using the Balkan route, which takes them across the Aegean Sea to Greece en route to Northern Europe.

Greece has been under pressure for several months, because most of the refugees arriving in the country continue their journey through the Balkans to Austria, Germany and Sweden without any restrictions.

The uncontrolled influx of migrants has overwhelmed many European countries and has forced them to reintroduce internal border controls within the Schengen area.

US Should Do More to Help Europe Tackle Refugee Crisis