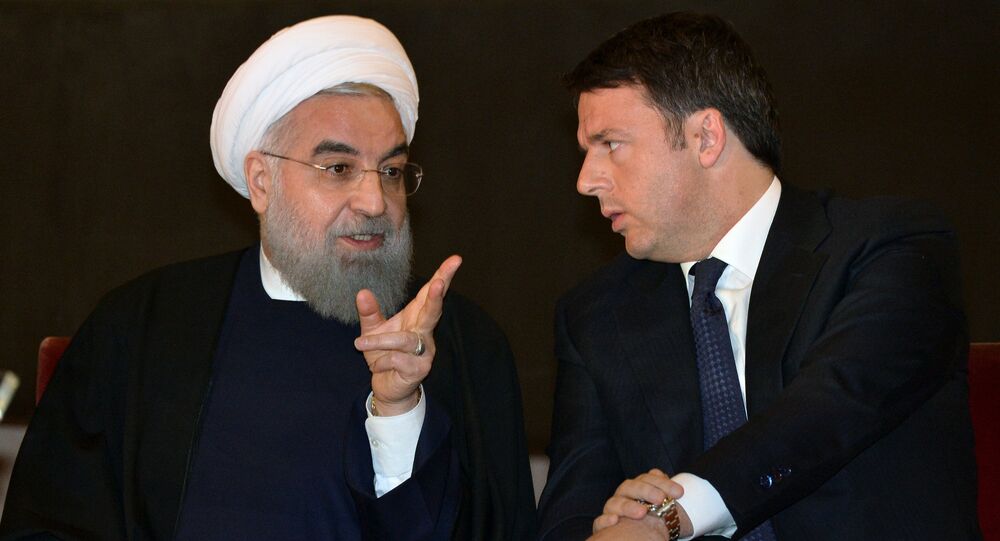 Several multibillion-dollar deals were clinched during the Iranian President's visit to Italy, just ten days after the lifting of Western sanctions against the Islamic Republic.

© REUTERS
Coming in From the Cold: Rouhani in Europe to Discuss Post-Sanctions Iran
Iran and Italy inked a wide selection of business contracts worth 18 billion dollars during the first day of Iranian President Hassan Rouhani's visit to Rome, media reports said.

The deals include a series of commercial agreements between Iranian companies and Italian steel firm Danieli worth at least 6 billion dollars, a 4-billion-dollar contract between Tehran and the Italian infrastructure development firm Condotte, and a 5.4-billion dollar deal that Tehran signed with the Italian company Saipem.

Rouhani's two-day visit to Rome is his first foreign trip since the European Union and the United States lifted economic sanctions against his country.Italian Prime Minister Matteo Renzi, for his part, touted the conclusion of bilateral agreements as just the beginning of cooperation between the two countries.

"This is just the beginning of a journey. There are economic sectors where we must work together much closer," Renzi said.

His remarks came two days after Rouhani held talks with Chinese President Xi Jinping in Tehran, during which the sides signed a total of 17 agreements, including on the construction of two nuclear power plants in southern Iran and on the long-term supply of Iranian oil to China.

© AP Photo / Vahid Salemi
Iran Renews Oil Supplies to Egypt Following Sanctions Lifting
Rouhani's visit to Rome will be followed by  a visit to France, where the sides are expected to announce a major deal on Iran buying more than 100 Airbus planes.

Experts have, meanwhile, predicted that Western trade with Tehran could rise from current annual levels of around 8.2 billion dollars to pre-sanction levels of 30 billion dollars, which would see a range of international products and services enter the country.

Additionally, Iranian products and resources, such as the country’s oil, would also become available on the global market.