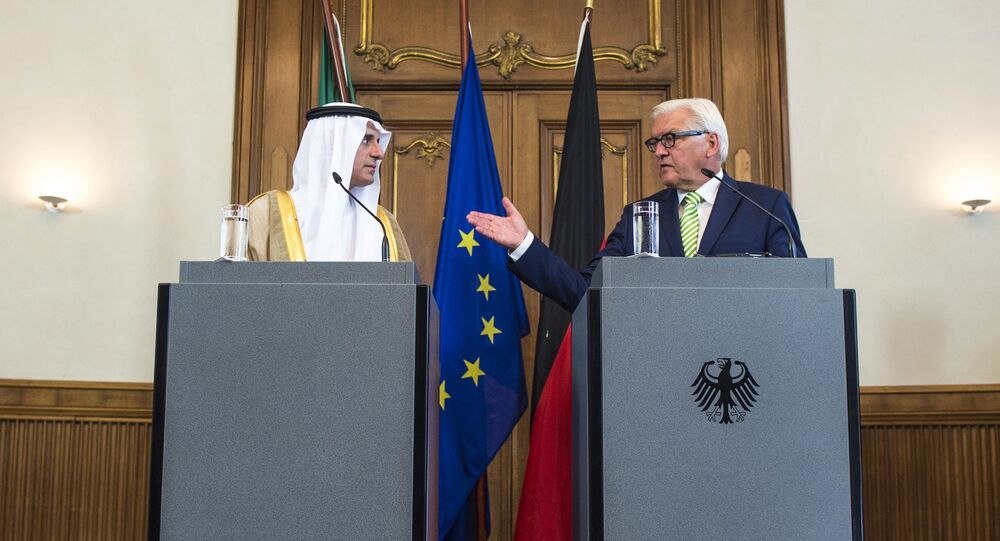 Despite its threat earlier this month to restrict arms exports to Saudi Arabia, the German government has nevertheless given permission for the construction of boats for the Saudi navy, Der Spiegel reported.

© AP Photo / Hassan Ammar, File
Saudi-Led Coalition Makes Airstrikes on Engineering College in Sanaa
Despite threats from the German government to restrict arms sales to Saudi Arabia, including the delivery of defensive armaments, Germany's Minister for Economic Affairs Sigmar Gabriel has nevertheless agreed to the sale of arms to Riyadh, Der Spiegel reported on Monday.

The newspaper reported that Gabriel, who doubles as Germany's vice-chancellor and head of the Social Democratic Party (SDP), has been vocal in his criticism of Riyadh but has recently proved reluctant to match his decisions to the rhetoric.

"Only in December he (Gabriel) caused a small diplomatic scandal when he made a public accusation against the major partner in the Syrian talks, saying that mosques in Germany financed by Saudi Arabia are focal points for potential terrorists," Spiegel wrote.

Regarding arms sales, Gabriel told Spiegel on January 4 that "now we need to check if also we need to assess more critically the future sale of defensive armaments to Saudi Arabia, which so far we have been supplying."

"This shows that it was right to deliver neither battle tanks nor G36 assault rifles to Saudi Arabia," declared Gabriel.

On January 5 the German federal government stated that it "noted with dismay" Saudi Arabia's execution of 47 prisoners on January 2, a move which inflamed sectarian conflict in the Middle East.

The German government said the execution of prominent Shiite cleric Nimr al-Nimr "could also worsen religious and political tensions in the region," and Foreign Minister Frank-Walter Steinmeier called for "deescalation" and "dialogue."

The government "noted with great regret" that Saudi Arabia had broken off diplomatic relations with Iran.

"Relations between Saudi Arabia and Iran, however turbulent they may be, are fundamental to resolving the crises in Syria and Yemen and to achieving stability across the entire region," government spokesman Steffen Seibert said.

© AP Photo / Militant website via AP, File
Arms Sales in Iraqi Bazaars: German Weapons ‘May Fall Into Daesh Hands'
The statement also mentioned the possibility of greater restrictions on arms sales to Saudi Arabia, and cited the example of the G36 assault rifle, which it has refused to sell to Saudi Arabia.

However, despite the announcements, last week the Minister for Economic Affairs admitted that a 1.5 billion euro deal between Germany and Saudi Arabia for the construction of 15 patrol boats for the Saudi navy is nevertheless going ahead, and that construction of the boats has begun at the Lurssen shipyard in northern Germany.

The revelation came in response to a question in the Bundestag from one of the Green Party's representatives, Agnieszka Brugger.