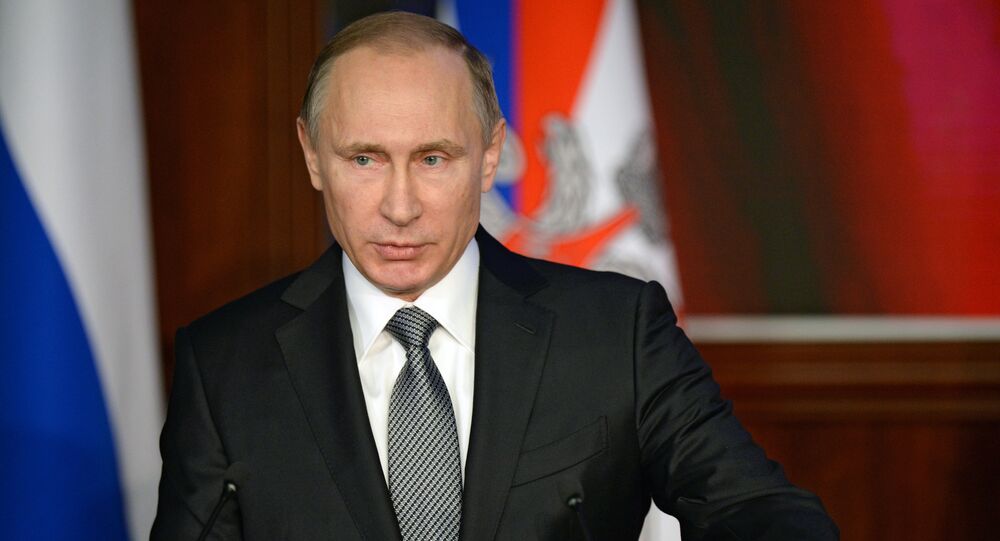 Since the beginning of Russia's anti-Daesh campaign in Syria, Western politicians' attitudes toward Russian President Vladimir Putin have changed dramatically, according to a British journalist.

Host photo agency
Putin and Trump Owe Popularity to Strong Leadership
This year has seen a major U-turn in foreign politicians' perceptions of the political image of Russian President Vladimir Putin, UK journalist Peter Henn said, referring to the beginning of this year, when Putin was seen as "a Bond villain-like character" by many Western political figures.

However, the situation then drastically changed and now Putin is considered to be the "no-nonsense politician" who is leading the mission to destroy Daesh (ISIL/ISIS) militants, according to the journalist.

Putin "started the year amid the worst relations with the West since the Cold War," Henn said in his article for the Daily Express.

At the time, the Russian President was accused of invading Ukraine, bringing down Malaysia Airlines flight MH17 near Donetsk, instructing Russian warplanes to enter British airspace and political killings. The Russian Foreign Ministry has repeatedly denied the accusations, which was perceived by the Western media as an anti-Western position.

"But something happened to make the international perception of …Mr. Putin take a 180 degree turn. In the last few months… his Iron Man stance against ISIS, also known as Daesh, has won him plenty of admirers," Henn said.

He recalled that in late September, Russia launched an air campaign against Daesh in Syria, during which "Mr. Putin's bombers conducted hundreds of sorties in war-ravaged Syria during the mission, Moscow's Defense Ministry confirmed."

According to Henn, Putin's "relentless mission" to destroy Daesh prompted people to gradually change their perceptions of the Russian leader. Henn recalled that in November, Russia's old adversary, the US, announced that Putin and his US counterpart Barack Obama agreed on a political transition, which could put an end to the civil war in Syria.

"Now Mr.Putin, the man who was feared and loathed by the West has the ears of its leaders — and now he has the respect of its people," Henn concluded.

© REUTERS / Carlos Barria
Obama 'Reaps the Fruits' of His Disrespect for Vladimir Putin
It was launched on September 30, when more than fifty Russian warplanes, including the Su-24M, the Su-25 and the Su-34, commenced precision airstrikes on Islamic State targets in Syria at the behest of Syrian President Bashar Assad.

On Friday, Russian Defense Ministry officials said that Russian fighter jets had made a total of 5,240 sorties since the start of the air operation against Daesh militants in Syria.  The officials added that 145 of those sorties had only been carried out by long-range bombers, and that the Russian warplanes  made 189 sorties on Thursday alone.