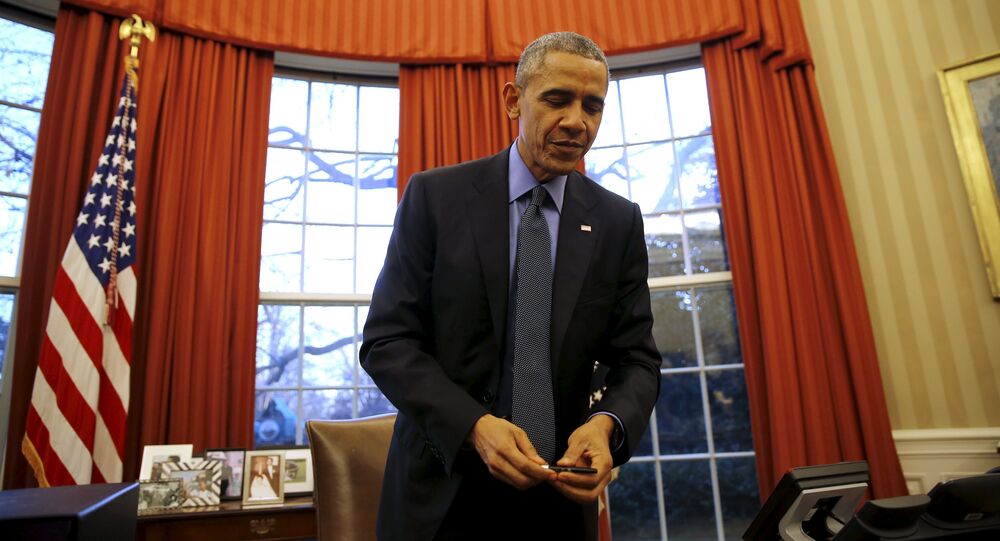 Obama 'Reaps the Fruits' of His Disrespect for Vladimir Putin

Barack Obama previous use of disrespectful language in relation to Russian President Vladimir Putin is now backfiring on the US leader, according to Washington Times columnist Todd Wood.

© AFP 2021 / Jewel Samad
Obama 'Trying to Do Whatever He Can' to 'Defeat Putin'
Washington Times columnist Todd Wood hit out at Barack Obama for having used disrespectful language toward Russian President Vladimir Putin, something that he said is now "coming home to roost."

Wood referred to several examples of inappropriate remarks made by Obama with respect to President Putin.

In particular, Wood mentioned the 2013 NSA spying scandal which saw Edward Snowden given asylum in Russia.

Wood recalled that at the time "Obama quipped regarding Mr. Putin" and said that "I know the press likes to focus on body language, and he's got that kind of slouch, looking like the bored kid in the back of the classroom."

"The comment seemed to come out of nowhere and was beneath the leader of the Free World, betraying some type of deep-seeded, schoolboy insecurity," Wood said.

Also, he lashed out at Obama's comments concerning Russia during his 2015 State of the Union address, during which the US President in particular said that the "Russian economy is in tatters."

© Sputnik / Host photo agency
Obama's Empty Promises Pushing Europe to Putin's Way of Thinking on Syria
Last but not least, Wood recalled, was Obama's escapade during a recent Steve Kroft interview on "60 Minutes", in which the US leader qestioned President Putin's leadership skills.

From Wood's point of view, it is small surprise that Obama now has to reap the fruits of his disrespect for the Russian President.

"We are seeing the fruits of his words as Mr. Putin lands an expeditionary force in the Middle East, rapidly expands air bases in Syria and sells Iran sophisticated weapons systems by the ship load," Wood said.

Obama 'Trying to Do Whatever He Can' to 'Defeat Putin'

Putin Has Better Approach to 'Mideast Diplomatic Game' Than Obama