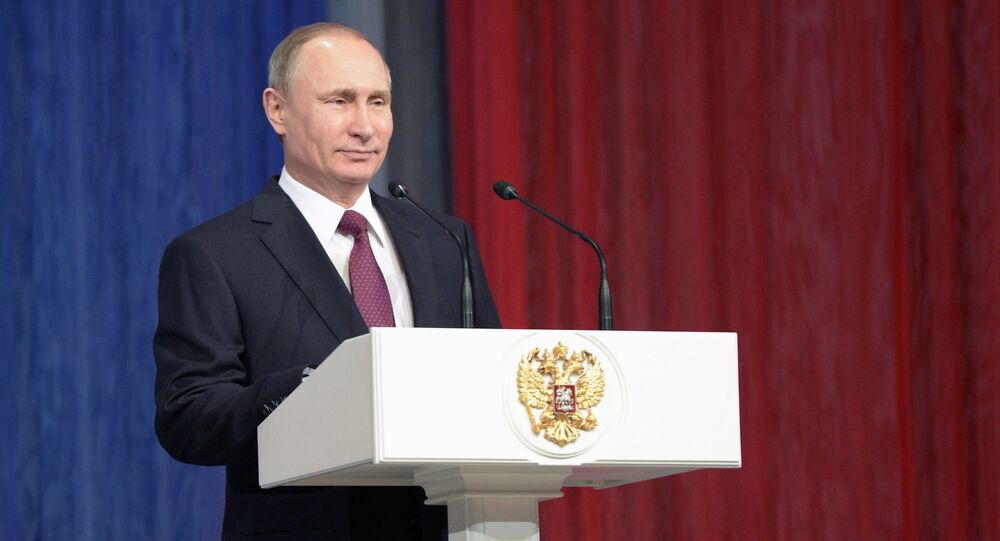 In 2015, Russian President Vladimir Putin touched upon a whole array of pressing international issues, and it seems that the world was ready to listen as each remark made global headlines.

© AP Photo / Alexander Zemlianichenko, pool)
Putin Calls 70th Anniversary of End of World War II Main Event of 2015
2015 saw Russian President Vladimir Putin discuss a spate of hot-button topics, with his thoughtful and sharp remarks quickly grabbing international headlines. Here is a list of some of Putin's most outstanding remarks at important occasions throughout the year, including his meetings with senior foreign officials, his address to the Russian Upper House (Federal Assembly), as well as his interviews and at his keynote press conference:

On the downing of the Russian bomber Su-24 and Moscow's relations with Turkey:

"Today's loss is a stab in the back carried out by accomplices of terrorists."

"Apparently, God decided to punish the ruling clique in Turkey by depriving them of their minds and reason."

"We do not want saber-rattling and we will not do this. But if someone thinks that by committing heinous war crimes and killing our people, they will be let off with just tomatoes or a few restrictions in construction and other industries, they are profoundly mistaken."

"If before, Turkey had constantly violated Syrian airspace, let them try it now.

"But if someone in the Turkish government decided to lick the Americans in a particular place, I don’t know if they are acting in a right way. I don’t know whether the Americans need this. You can imagine that at some level, there was an agreement that we will shoot down a Russian aircraft here, and you will turn a blind eye to our entering Iraqi territory and occupying part of Iraq. We do not know whether such an exchange took place."

"I’ve already said that during my address to the Federal Assembly, and I want to say it again here: we consider the Turkish a friendly people, and we don’t want to spoil relations with Turkish people. As for the current Turkish leadership – as they say, nothing is eternal under the moon."

"Whatever happens, in the long run Russia and Ukraine are doomed to a common future."

"In relation to Ukraine and the post-Soviet countries in general, I am convinced that the position of our Western partners — Europe and the US — is not to do with the protection of Ukraine's interests, but with attempts to prevent the re-creation of the Soviet Union. And nobody wants to believe us that Russia doesn't aim to re-create the Soviet Union."

YouTube/Ruptly TV
Light Up, Crimea! 'Electricity Bridge' Goes Online
"I told them [the Western leaders] that the people are a vital issue for us. I do not know what interests do you protect, but we are defending our [interests] until the end. And this is an extremely important thing."

"Not because we want something to bite or snatch. And not even because Crimea is of strategic importance to the Black Sea region. But because it is an element of historical justice. I think we did the right thing, and I do not regret anything."

"We acted in the interests of the Russian people and the whole country. Replacing it with the money and replacing people with some benefits and the possibility of any contracts or bank transfers is absolutely unacceptable."

"You know, from the start we have been saying that the policy of sanctions and isolation in general is ineffective in the modern world and does not usually reach its goals. This is practically impossible regarding a country like Russia. It is enough to simply look at its geographical map."

"We are not going to stick out our bottom lip over the sanctions. We are waiting. Waiting for everyone."

"We don't consider anyone to be our enemy and do not recommend anyone consider us as their enemy."

"We are a country with a huge potential for development, with large natural resources. And, of course, we are undoubtedly a great nuclear power: we have to the nuclear potential which is on a par with that of the United States."

"Russia doesn't talk to anyone in a hostile tone… Everything we do is just a response to the threats emerging against us. Besides, what we do is limited in scope and scale, but is, however, sufficient to ensure Russia’s security ".

"As for some countries' concerns about the possible aggressive actions of Russia, I think that only an insane person and only in a dream can imagine that Russia would suddenly attack NATO."

"I want to tell you that there is no need to be afraid of Russia. The world has changed so much that realistic people cannot imagine such a large-scale military conflict nowadays. We have lots of other things to do, I assure you."

"I am proud of Russia and I am sure the vast majority of the citizens of my country feel a sense of love and respect toward their homeland. We take pride in Russia's culture and Russia's history. We have every reason to believe in the future of our country. But we do not have any fetish about Russia being a superpower in the world. We are engaged in just one thing — the protection of our fundamental interests. "

On Russia's air operation in Syria:

" If we just stood by and let Syria get gobbled up, thousands of people running around there now with Kalashnikovs would end up on our territory, and so we are helping President Assad fight this threat before it reaches our borders."

"Why do we need such a base [in Syria]? If we need to reach someone, we will do so in any case and without having this base."

On the fight against terrorism:

"Fifty years ago, the streets of Leningrad taught me one thing: If a fight's inevitable, you must strike first. And our actions in Syria did not have any impact on the threat of terrorist attacks in Russia, I assure you.

"We have nothing to fear. We are in our country and we are in control of the situation."

"We have never seen Europe as a mistress. I speak absolutely seriously. We have always offered a serious relationship."

"Europe's problem is that it does not pursue an independent foreign policy."

"Some major powers or superpowers, I mean the United States, which claim their exceptionalism and see themselves as the only center of power in the world, need vassals rather than allies. Russia cannot exist in such system of relations."

"Hopefully, there will be no madman on Earth today, who will decide to use nuclear weapons."

Person of Influence: Italians Give Kudos to Vladimir Putin