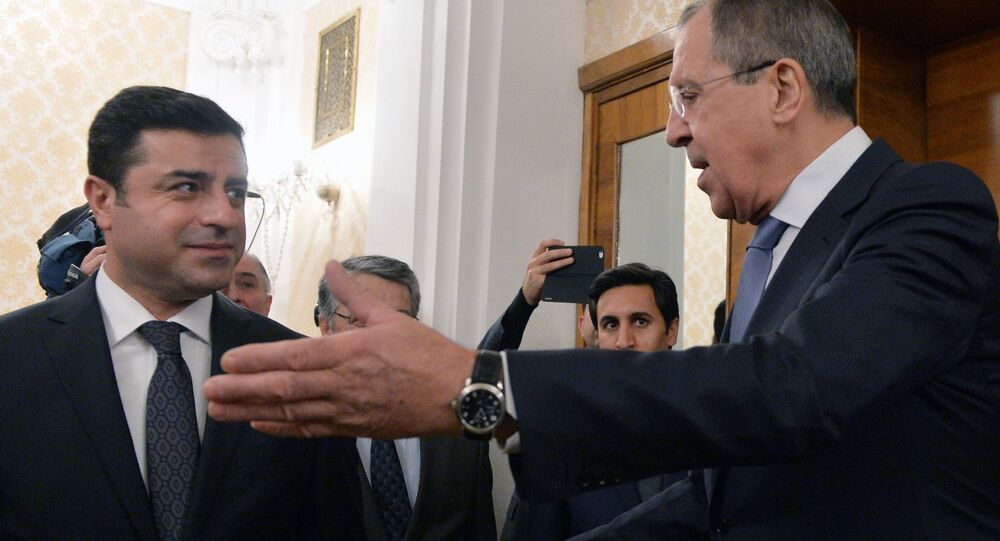 The invitation from Moscow to Turkey's pro-Kurdish leader Selahattin Demirtas is a demonstration of Russia's belief in the Kurds as a vital ally in the fight against Daesh, writes the German press.

"Demirtas is the first influential politician from Turkey to travel to Russia since the Turkish air force shot a Russian fighter jet at the Syrian border on November 24," wrote DWN, which also remarked on the reaction to his visit from Turkey's government.

On Tuesday Turkish Prime Minister Ahmet Davutoglu accused the HDP of "treason" because Demirtas called the downing of Russia's Su-24 bomber a mistake during a meeting with Russian Foreign Minister Sergey Lavrov on Tuesday.

The HDP leader also remarked on the importance of maintaining dialogue between the two countries, which he said have a very important relationship.

"At the moment we are experiencing a worsening of Russian-Turkish relations, and in parallel, a time when we have to look for very important solutions in the Middle East. We are a political party which in our own country fights for pluralism. We attach a great deal of importance to Russian-Turkish relations, and it is a cause of sadness to us that a situation has occurred, as a result of which relations have soured," Demirtas told Lavrov at the meeting.

In turn, Russia's Foreign Minister told Demirtas that Moscow wants the cooperation of all parties who are committed to fighting terrorism.

"We know that among those who, weapons in hand, fight on the ground against the danger of Daesh, against extremist groups, are the Iraqi and Syrian Kurds," said Lavrov.

© Sputnik / Alexey Kudenko
Why Erdogan is Terrified Over Prospects of Russian Dialogue With Kurds
"They, together with the Iraqi and Syrian armies fight for their homes, for the right to live on their land. That is their inalienable right, like the right of Christians, Yazidis and other minorities to remain on the land of their ancestors and not be subjected to the lethal danger of terrorists."

The meeting in Moscow between the politicians was a signal to Ankara of Kurdish power, and Russia's support for the Kurds, remarked DWN.

"Strengthening the Kurds would really be a problem for Turkish President Recep Tayyip Erdogan," wrote the newspaper. "A few days ago Demirtas signaled the wish to proclaim autonomy."

Prior to his Moscow visit, Demirtas announced his support for the idea of autonomy for the southeastern Anatolia region, where he said local people had "embraced autonomy" in opposition to "dictatorship" imposed from Ankara. The AKP held a snap election on November 1 after losing majority rule in the June election, largely thanks to gains by the HDP, which received 13.2 percent of the votes.

"They made a coup after June 7," said Demirtas.