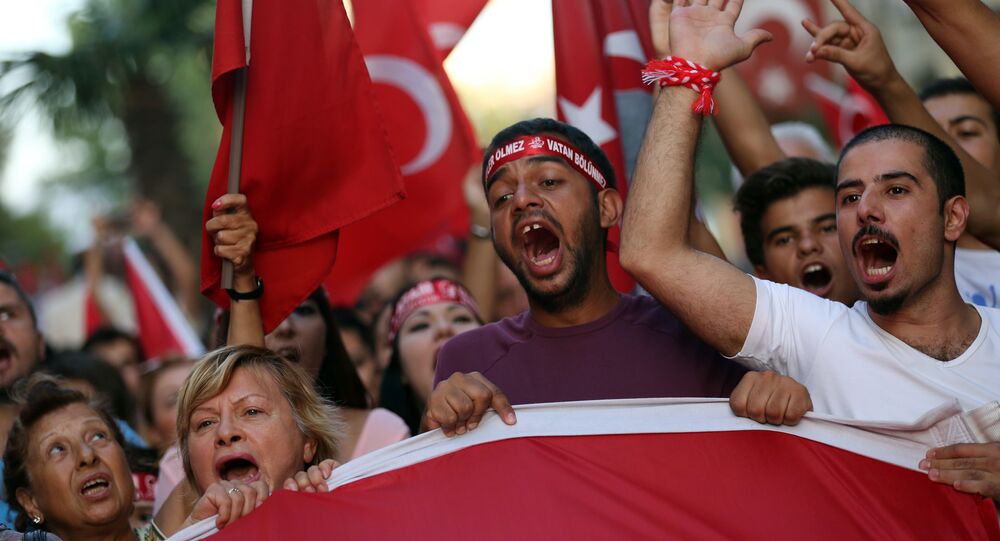 The Turkish government has belatedly realized it made a mistake in shooting down a Russian Su-24 bomber in late November, an action which has damaged Turkey both politically and economically, said the leader of Turkey's Peoples' Democratic Party Selahattin Demirtas.

© AP Photo / Militant website via AP
Confessions of a Daesh Fighter: Target Practice in Turkey
Turkey's decision to shoot down Russia's Su-24 bomber over Syria has cost the country dearly, the leader of Turkey's Peoples' Democratic Party (HDP), Selahattin Demirtas, told journalists on Friday as he returned from his visit to Moscow, having held talks there with Russian Foreign Minister Sergey Lavrov.

"They (the Turkish government) understand perfectly well what a mistake they have made," said Demirtas, who pointed out that after beginning by justifying the shooting down of the plane  as a defense of Turkish airspace, Ankara had changed its version of events and claimed the plane would not have been shot, if the authorities had known it was Russian.

"Look at it objectively – now millions of people have ended up in a difficult situation. The crisis in relations has touched everybody, from market traders to rich businessmen, students and workers. What do the authorities do? Do they actually take any steps to improve the situation? No."

"Only we have to take responsibility and take the necessary steps," said the politician, whose pro-Kurdish HDP party received 13.2 percent of the votes in Turkey's June 2015 general election.

"We can fight for stable global policy at home and abroad. That is our priority. We traveled to Russia and met with representatives of the Russian Foreign Ministry."

"Let them show me one example where the shooting down of the Russian plane has brought a benefit to Turkey, and I am ready to apologize for what I said," said Demirtas, who criticized the downing of the jet during his discussion with Lavrov.

"The ruling party cannot cover up its mistakes by making accusations against us of treason. Now they are trying to cover up using the criticism that they have aimed at us. I would like to remind Mr. Davatoglu that it is not worth saying words today that you will regret very much tomorrow. What did you say about Israel? We see what that came to in the end. The same thing could happen with Russia."

"Let the government make a list of neighboring countries which we can travel to and hold a constructive dialogue with. Which countries in the region have we kept good relations with, developed mutual cooperation. With Armenia? With Iran? Can we negotiate with Baghdad, with Damascus?"

"Today in the Middle East we have spoilt relations with all countries but Qatar and Saudi Arabia. Our contacts with all the others are either tense, or they don't exist. All thanks to the 'successful' foreign policy of the Turkish leadership," said Demirtas.