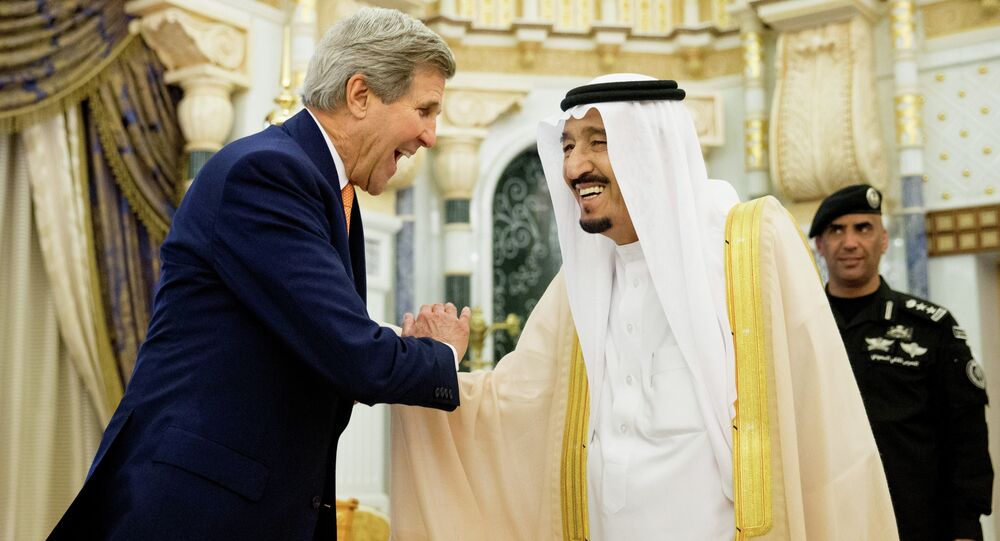 "If you just take a look at the coverage in the media in the last three months, the amount of criticism of not only Saudi Arabia, but this silence of the role of Saudi Arabia in this has started to change quite dramatically," said Parsi.

In particular, news outlets in the US and elsewhere have recently begun to examine the links between terrorism and the more than $100 billion Saudi Arabia has spent funding religious institutions across the world that promote extremist Wahhabi and Salafi ideological beliefs.

This week Vice News reported on Saudi attempts to announced its leadership of an "anti-terror coalition" of Sunni Muslims states, which states such as Pakistan and Malaysia then denied they were a part of.

"Saudi Arabia spends enormous sums on mosques and Islamic schools, or madrassas, in countries like Malaysia and Pakistan, and it has given Lebanon significant military aid. Hartung (William Hartung, director of the Arms and Security Project at the Center for International Policy) speculated that Saudi officials might have assumed they could call in favors related to that largesse. 'Sometimes they have an inflated sense of their importance in the world because they spread their money around,' he said."

© Sputnik / Valeriy Melnikov
Player Three Enters the Game: ‘Saudi Coalition is a Sly Ploy to Gain Diplomatic Leverage’
The New York Times responded skeptically to the Saudi announcement of its plan to organize a military coalition of 34 nations against Daesh (ISIL), which excluded important regional powers such as Iran.

"In fact, it is hard to see Saudi Arabia, a Sunni-led state, as a serious partner against the Islamic State unless it stops financing the Wahhabi religious schools and clerics that are spreading the kind of extremist doctrine that is at the heart of the Islamic State’s ideology. Although the Islamic State has pledged to destroy Saudi Arabia, Saudi leaders have so far been more concerned with opposing Shia-led Iran, which they consider their greatest adversary," the New York Times wrote in an opinion piece.

In addition, the London Evening Standard recently published an article calling on the British government to "start by stopping foreign money funding Wahhabi textbooks, mosques and education in the UK."

The newspaper quoted a Freedom House report on the Wahhabi books and teachings funded and exported by Saudi Arabia, which concluded that it "continues to propagate an ideology of hate toward the ‘unbeliever,’ which include Christians, Jews, Shi’ites, Sufis, Sunni Muslims who do not follow Wahhabi doctrine, Hindus, atheists and others."

"It would be bad enough if Wahhabism were confined to that country alone, but over the past 30 years it’s estimated that Saudi Arabia has spent more than $100 billion promoting Wahhabism in mosques, schools and textbooks around the world — far more than the $7 billion spent by the Soviets on communist propaganda over the 20th century," wrote the London newspaper.

Riyadh Under Pressure: Saudi Arabia Hostage to Its Own Policy in the Region