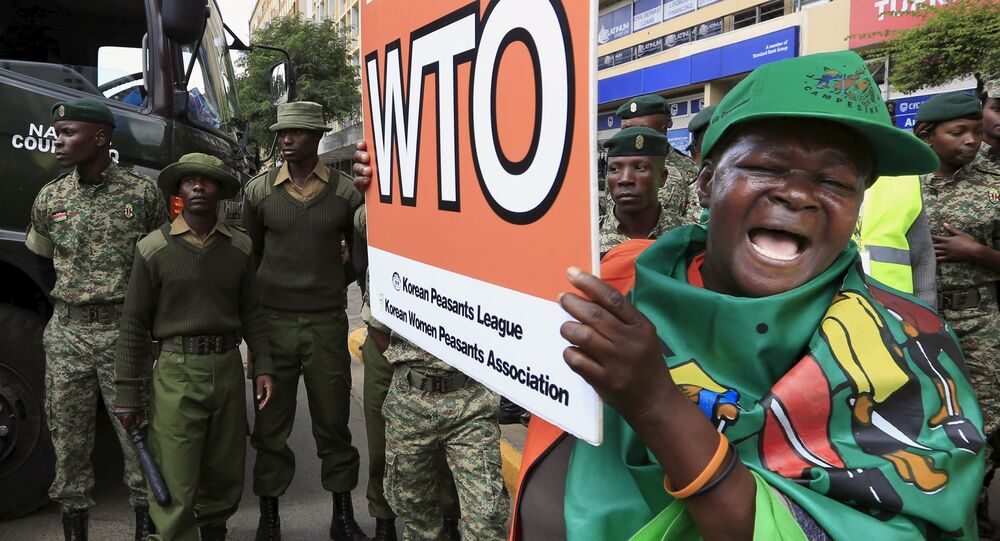 Raimundas Karoblis, Lithuanian vice-minister of foreign affairs said that the future of the Doha Development Agenda on addressing the needs of less developed countries in their economic development is a stumbling block.

© AFP 2020 / KARIM SAHIB
Lithuania Urges WTO to Abandon Doha Development Agenda as Insufficient
NAIROBI (Sputnik), Anastasia Levchenko — The issues of state credit for agricultural exports and the needs of the World Trade Organization's (WTO) least developed members are providing to be divisive issues at the ongoing ministerial conference in Nairobi, Raimundas Karoblis, the head of the Lithuanian delegation to the talks, told Sputnik.

Kenya's capital, Nairobi, is currently hosting the WTO's four-day 10th Ministerial Conference, for which the economy ministers from over 160 states have gathered. The summit aims to define the course of multilateral trade relations for the coming years.

"There is some resistance from several WTO members to go deeper to have more restricted disciplines on export credits for state-trading enterprises, which are more and more applied by China and India and several other developing countries. It is one of the most disputable issues on agricultural trade," Karoblis, Lithuanian vice-minister of foreign affairs, said.

© AP Photo /
Rebalancing WTO Asymmetries Should Be Outcome of Ministerial Conference
According to the official, the future of the Doha Development Agenda on addressing the needs of less developed countries in their economic development is also a stumbling block.

"There are several member states, like India, that are speaking about building broader packages of issues that should be addressed than those now on the table," the official explained.

The Doha Round is the latest round of WTO negotiations, which was launched in 2001. The agenda's issues have long been the subject of debate within the organization, leading to a 15-year-stalemate, casting doubt on the organization's decision-making ability.

Rebalancing WTO Asymmetries Should Be Outcome of Ministerial Conference

Accession to WTO Marks Historic Day in for Afghanistan