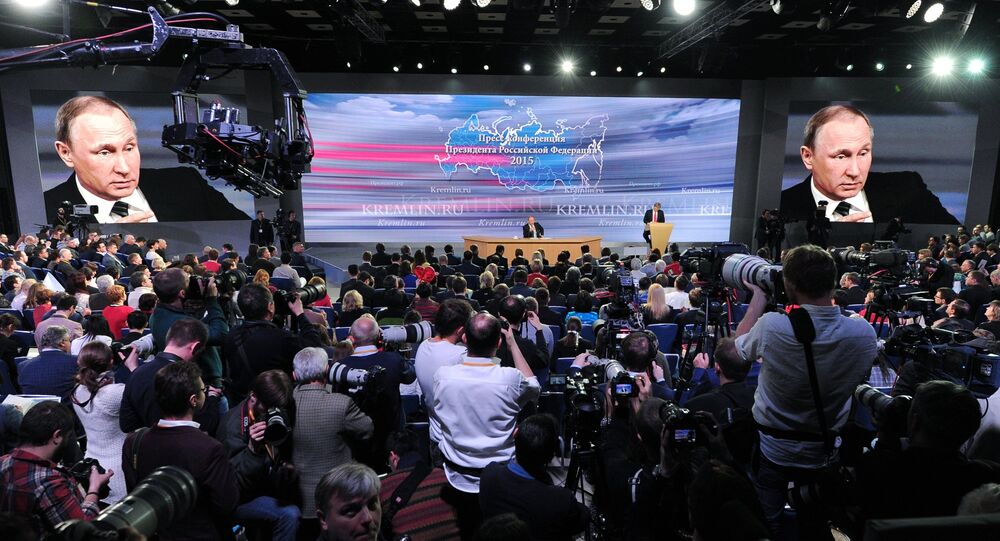 Willy Wimmer, a former German deputy defense secretary said that the best way to explain the policy of Russia to the German people would be to transmit events like the recent press conference given by Russian President Vladimir Putin live on German TV and radio stations in German language live.

© Sputnik / Ramil Sitdikov
Who Makes the President Proud? Putin’s Top Answers at His Annual Press Conference
Earlier in the day, Putin held his traditional annual press conference for the 11th time. The Russian leader answered questions about the Russian economy as well as about issues on the international agenda.

"The best way to explain the policy of Russia to the German people would be to transmit such a kind of a press conference live on German TV and radio stations in German language live… The crucial problem in our part of Europe is, that we had been forced to forget the basic rule of peaceful neighborhood, which had been given to us by the Romans: audiatur ad altera pars [to listen to the other side]. President Putin makes it in a unique way possible, to understand the policy of his country," Willy Wimmer said.

© Sputnik / Grigoriy Sisoev
Meet the Press: Vladimir Putin's Annual Press Conference
12
According to Wimmer, who also used to serve as vice president of the Organization for Security and Cooperation in Europe's (OSCE) Parliamentary Assembly, Putin takes his people seriously.

"When we look on our own situation in our own country or in our part of Europe, we feel what is needed here," he said.

Who Makes the President Proud? Putin’s Top Answers at His Annual Q&A