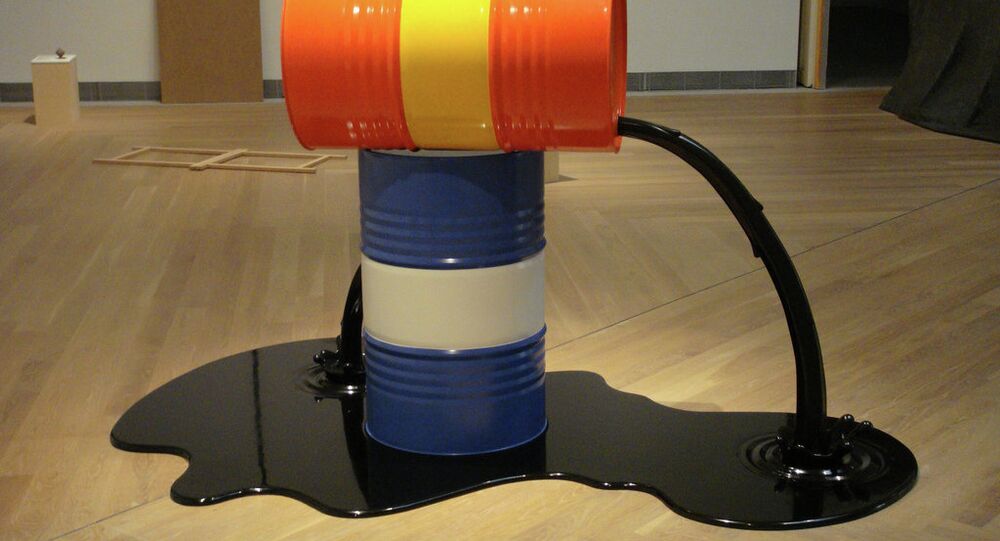 The US Fed's lack of decisiveness regarding rates, the corporate bonds meltdown, and the effects of robust economic acceleration in Germany on the price of metals and crude oil might prompt Russian assets to appreciate in value in 2016, suggesting that investors should buy them while they are still cheap.

© Flickr / Carsten ten Brink
German Media Predicts Dire Consequences for Europe Amid Falling Oil Prices
Kristian Rouz – Crude oil prices are currently poised to skyrocket amid global energy industry disinvestment and accelerating growth in the US, Japan and Europe, as well as economic stabilization and readjustment in China, Denmark's Saxo Bank outlined in its 2016 outlook. Consequently, commodities prices are set to re-appreciate, promising greater returns per dollar invested. This will boost equity prices in Russia, where the national currency, the ruble, is poised to rise after hitting its lowest-ever point earlier this month.

For international investors, the current oil drag might be providing a promising chance to boost their portfolios in the short-term, with emerging markets returning to growth next year.

"We are nearing the end of the paradigm paralysis that has dominated the policy response to the global financial crisis. Quantitative easing and other forms of intervention have failed. China is transitioning, and geopolitical tensions are as complex as ever. The marginal cost of money is rising, and so is volatility and uncertainty. It is against this backdrop we have set this year's predictions," Steen Jakobsen of Saxo Bank commented.

Russia’s ruble is set to rise 20% against the US dollar as the US Federal Reserve is likely to be outstandingly dovish in their monetary tightening measures in 2016. Janet Yellen, the Fed chair, has repeatedly stated that the pace at which rate hikes proceed will be data-dependent, and now that the US economy has suffered a junk bond crash, likely weighing on the entire fixed-income market, the overall pace of growth is likely to slow. Consequently, the Fed may tighten policies more slowly and less decisively, providing the emerging markets currencies, including the ruble, with a solid chance to benefit on the crude rebound.

The Third Avenue collapse is likely to trigger an international corporate bonds fallout, Saxo outlined, rendering the euro stronger against the dollar even though the European Central Bank (ECB) is expected to retain their unprecedented monetary stimulus measures. As major fixed-income suffers a selloff amidst a rising yield, the emerging markets currencies would be among the top winners.

As the ruble rises, Russian assets will appreciate accordingly, meaning that the current prices are near their lowest. Investing in Russia would be profitable, yet risky, as political awareness will persist well into 2016.

"Unease among weaker as well as wealthier members of the cartel over the supply-and-rule strategy continues to grow. The long-awaited sign of an accelerated slowdown in non-OPEC production finally begins to flicker. Suitably buoyed, OPEC catches the market on the hop with a downward adjustment in output. The price mounts a quick recovery with investors scrambling to re-enter the market to the long side — once again bringing $100/barrel prices onto the horizon," Saxo predicts.

The euro is poised to rise to $1.23 in 2016 from its current $1.09 due to robust economic advances in Germany, where a massive current account surplus will drive the entire region. The US Fed's increase in borrowing costs would be utterly insufficient to support the dollar as the structural readjustment of the American economy would falter amid a lack of decisive action to support the reshoring of US-based manufacturers. Expensive labor is a great issue for the US, which might consider broadening the scope of immigration eventually to fend off the negative consequences of rising minimum pay, especially if another Democrat is elected next November.

The rebound in emerging markets will also be driven by the 2016 Olympics in Brazil and a subsequent acceleration in the nation’s economy.

"Stabilization, investment spending on the Olympics, and modest reforms will see sentiment rebound in Brazil, with EM exports helped by cheaper local currencies. The result: EM equities to have a great year — outperforming bonds and other equities," Saxo said.

Metals would rise on the 33% rebound in silver prices as the ‘safe haven’ reputation of fixed-income becomes further battered by the corporate bonds turmoil.

Eventually, investors should expect greater returns from the entire emerging markets segment, particularly in stocks and currencies, and while assets in countries such as Russia and Brazil remain cheap, it might be a prudent strategy to buy them out.

Oil Prices Could Reach $100 in 2016 Over OPEC Concerns, Activities