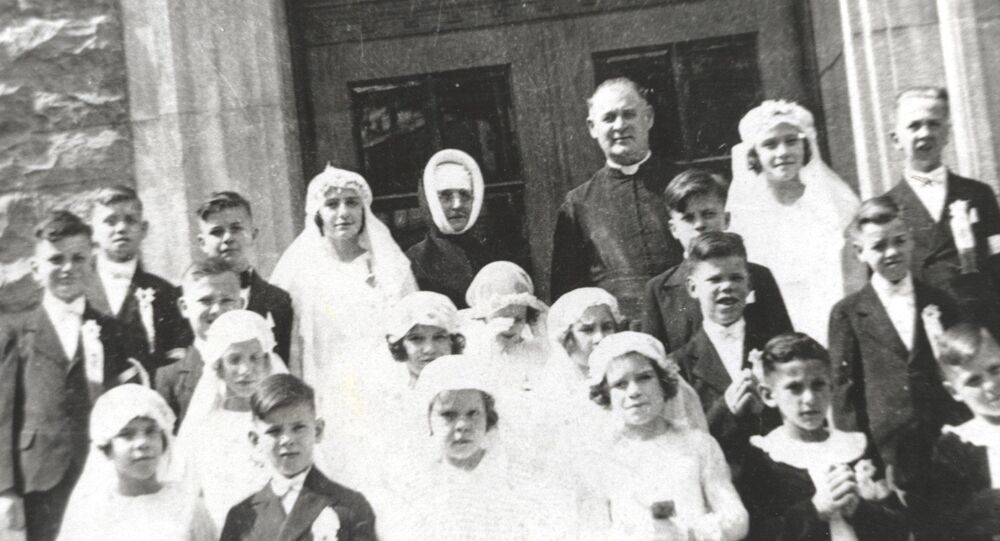 Between the 1940s and 1960s, when the Roman Catholic Church dominated life in Canada’s Quebec, the provincial government committed horrible crimes against orphaned children. Sputnik spoke with people closely familiar with the subject, including a former orphan who was confined to a psychiatric institution during his childhood.

© AP Photo / Mosa'ab Elshamy
Child Abuse in Egypt Requires Immediate Action – Human Rights Watch
The Catholic Church and the provincial government of Quebec, then led by Maurice Duplessis, a strict Catholic himself, made a deal, which falsely certified 300,000 orphaned children as mentally-ill, confining them to psychiatric institutions.

The deal was beneficial for the Church and psych wards, as they received funds from the government for "taking care" of orphans. These children later became known as the Duplessis orphans.

Thousands of children died in these institutions. Those victims who survived in mental-health hospitals told horrifying stories of how unspeakable things were done to them when they were young.

Years later, survivors began to speak out about all the harsh treatment and sexual abuse that they endured for years.

"I remember when I was sent to that clinic with a maximum level of security and closure from the outside world, we were put to tests, which they called ‘pharmaceutical research.' They tested the methods of ice showers and gave us different medications," Lucien Landry, a former Duplessis orphan, told Sputnik.

Some children tried to run away from these institutions, but staff took away their clothes, leaving them wearing only nightgowns. Their heads were shaved. Children had no shoes, wearing only socks and tights, Landry shared his painful childhood memories.

Although Landry never suffered from a mental illness, when he was sent to a psychiatric ward his personal file said "unable to function in public, needs a permanent and involuntary placement in the clinic."

In 1962, Landry managed to escape from that clinic. Soon he found a job and began a normal life. Eventually, Landry was able to find his mother at the age of 48. He didn't even know where he was born, until a Quebec social agency, which helps former Duplessis orphans, told Landry he was born in Quebec City.

"I know many Duplessis orphans and trust me they're definitely not mentally challenged. One of Quebec's renowned novelists Bruno Rua is a Duplessis orphan," said Alain Arsenault, a Montreal-based lawyer currently working on the case of orphans.

The lives of these people are permanently damaged by the Church and the Quebec government, which tookaway their childhood and filled it with pain, abuse and other dark memories.

Imagine adults who suddenly realize at 40 or 50 that they couldn't receive any education simply because someone wrote on their personal file that they had a non-existent mental disability. And for what? Well, because the Catholic Church of Quebec wanted to receive an extra dollar and a half for each child per day, Arsenault told Sputnik.

The role of the Catholic Church was central in the whole ordeal — it was making money off of its institutions, bringing in healthy children and diagnosing them a slew of non-existent mental illnesses, so the institutions could receive more money from the government, Arsenault said.

"The Catholic Church of Quebec is the main perpetrator in this case, while the government and doctors assisted to it. The Church has never apologized for anything," Arsenault told Sputnik.

What's even more outrageous, the Church says they helped orphans by "taking care" of them, by providing them with food and shelter. The Church refuses to speak with journalists, hoping that people would eventually forget what happened as time goes by. Survivors would eventually die out one by one and nobody would be taken accountable for horrible crimes against the orphaned children of Quebec, Arsenault said with disappointment.

US Government Failing to Legally Protect Children From Abuse, Neglect