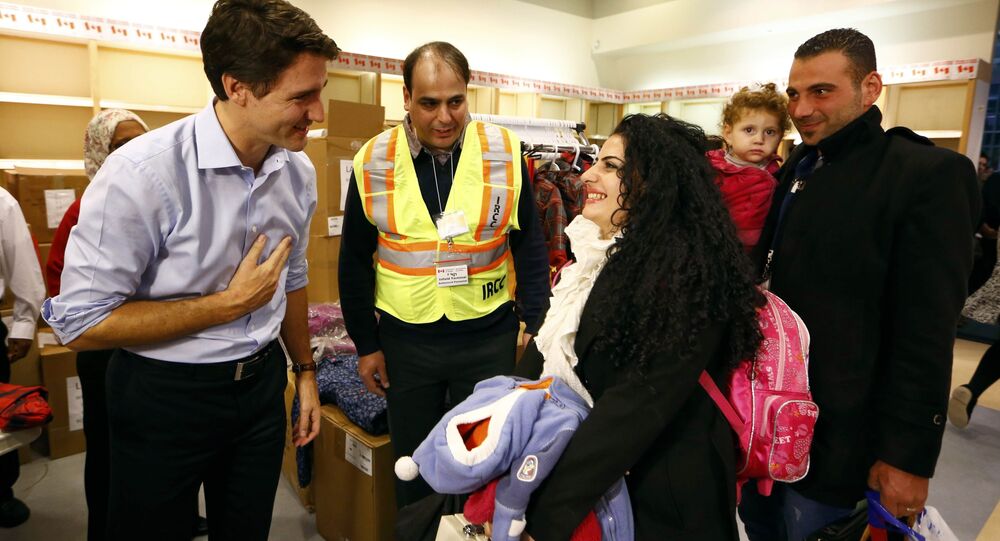 © AP Photo / Gregorio Borgia
US Governors’ Lawsuit to Block Syrian Refugees ‘Political Circus’ - Activist Group
The United States' plan to take in 10,000 refugees over the next year provoked fierce debate among politicians and the public alike. Meanwhile, Trudeau's government has vowed to accept 25,000 asylum seekers by the end of February, and it seems the Cabinet is really pushing forward despite anxiety over national security.

The first Canadian forces plane with 163 Syrians that arrived on Thursday marks a return to Canada's tradition of flying to safety large numbers of beleaguered people from all over the world. In the past, Canada took in thousands of people from Kosovo, Uganda and Vietnam. Now it's Syria's turn.

While the West struggles to cope with the biggest refugee crisis since the Second World War and certain US conservatives call for banning all Muslims from entering the country, Canada expects another plane on Saturday.

"We get to show the world how to open our hearts and welcome in people who are fleeing extraordinarily difficult situations," Trudeau said to staff and volunteers at the airport, according to Newser.

The airlifts are being carried out from Beirut and Amman, the two cities where the Canadian government has arranged refugee-processing centers for Syrian asylum seekers.

"This is something that we are able to do in this country because we define a Canadian not by a skin color or a language or a religion or a background," the Prime Minister told reporters. "But by a shared set of values, aspirations, hopes and dreams that not just Canadians but people around the world share."

"We really would like to thank you for all this hospitality and the warm welcome" said Kevork Jamkossian, who arrived with his wife and daughter, as quoted by the Atlantic. "We felt ourselves at home and we felt ourselves highly respected."

This is what real leadership on Syrian refugees looks like: Canada's PM Trudeau at airport. https://t.co/w9N4kjqYEN pic.twitter.com/0BuxkSvqpg

The prime minister emphasized that refugees entering Canada are regarded as permanent residents with an opportunity to become full Canadians. After landing in Toronto, refugees were given warm coats, social insurance numbers and health cards after a security and health screening. After processing, the new arrivals were taken to an airport hotel to rest.

This displays a remarkable shift in Canadian policy toward refugees since the previous government, led by Stephen Harper, had tightened the rules on grounds of security threat.