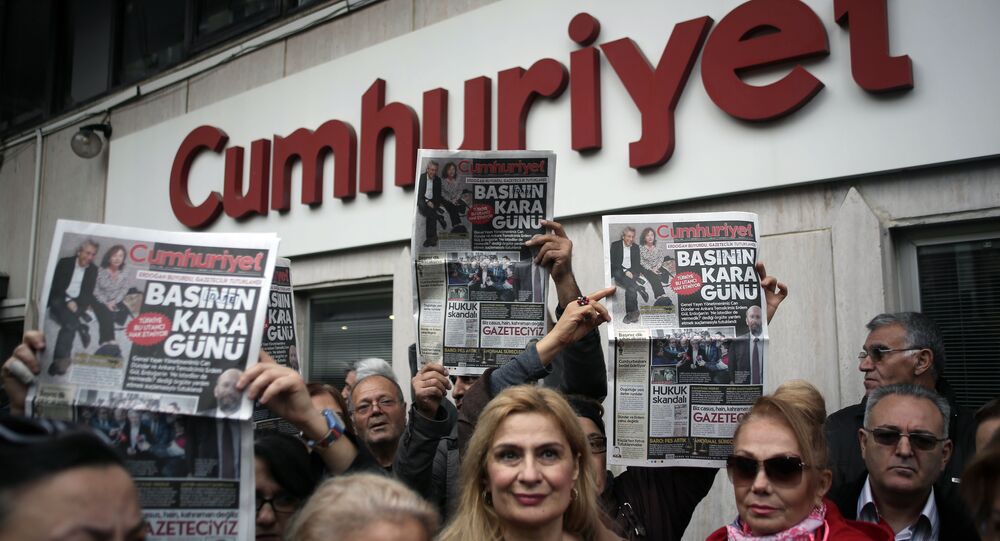 Ankara's deportation of Russian journalists indicates that it doesn't value the freedom of the press, according to Erkam Tufan Aytav, vice-president of Turkey's Journalists and Writers Foundation.

© REUTERS / Osman Orsal
Turkish Authorities Must Drop Charges Against Journalists - Rights Groups
In an interview with Sputnik, Erkam Tufan Aytav, vice-president of Turkey's Journalists and Writers Foundation, slammed Ankara for deporting Russian journalists, which he said is out of line with the principle of freedom of the press.

The interview came several days after a Russian television crew working for the channel Rossiya-1 was detained and deported from Turkey for allegedly violating rules that apply to foreign journalists working in the country.

"I don't approve of the deportation of Russian journalists from Turkey, which further adds to the current tension between Moscow and Ankara. This action by Turkish authorities is out of sync with the principle of press freedom," Erkam Tufan Aytav said.

He added that the deportation of Russian journalists reflected Turkey backsliding on human rights and that his country's democratic values are already "under serious threat."

Separately, Erkam Tufan Aytav expressed regret over the current crisis in Russian-Turkish relations, which he said should be resolved as soon as possible.

He was echoed by Tarik Toros, former chief editor of the Turkish TV channel Buguin and former director general of the Turkish newspaper Haberturk, who pointed to a biased approach that he said many Turkish media outlets use when covering the latest events.

"Currently, most of the Turkish press is controlled by businessmen supporting the current government. So in fact the media outlets are being controlled by Ankara," Toros said.

He also said that "the work of an independent journalist has been extremely complicated" in Turkey and that "it is extremely difficult to broadcast objective reality in such conditions."

© AP Photo
Reporters Without Borders Call for Release of Turkish Journalists
In November 2015, Turkey witnessed large-scale protests after it arrested two journalists for reporting on Turkish arms sales to Syrian militants.Ankara accused the reporters of divulging state secrets, while press freedom groups called on citizens to take action against Turkey's attempts to gag the media.

Over the last year, Turkey's attempts to censor its citizens have become more and more absurd; earlier this year, a journalist from a local daily newspaper in southeastern Turkey received a suspended prison sentence for merely 'liking' a remark criticizing Erdogan on Facebook.  In an interview with the Dogan News Agency, the bewildered journalist, Yashar Elma, said he "did not know that liking a comment was a crime."