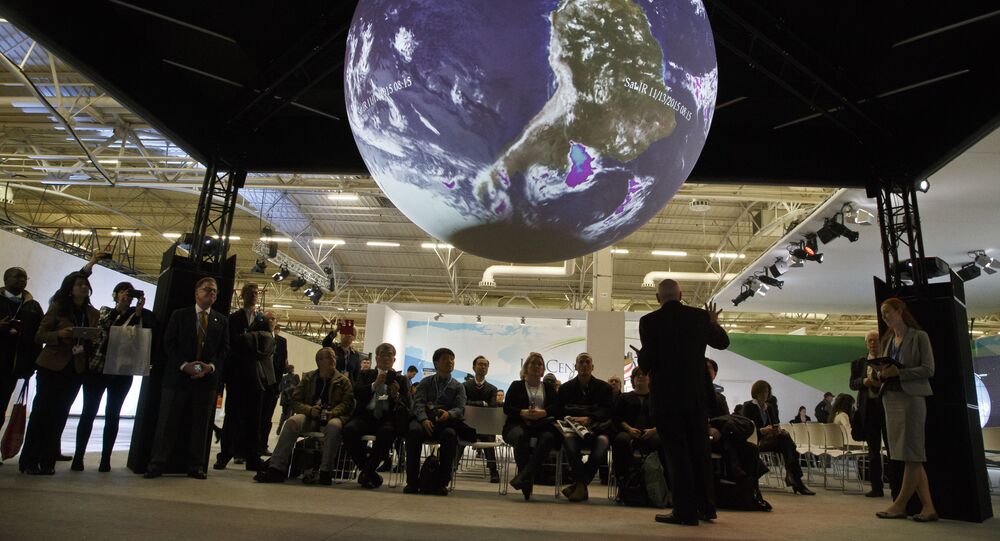 © AFP 2021
Global Community to Face 'Historic' Backlash If No Climate Deal Signed
PARIS (Sputnik) — A slimmer version of the draft Paris Climate Change Conference final deal was released Wednesday three days after the ministerial segment of the event had started.

The issue of targeted temperature has been high on the talks agenda as the small island nations insisted on the 1.5 degrees target as they are the ones seeing the climate change effect right now. At the same time, the Intended Nationally Determined Contributions representing emission cuts targets submitted by the countries-participants of the conference reportedly fail to meet even a 2 degrees target.

© REUTERS / Stephane Mahe
Climate Change Deal Should Use Fair Share Approach – Environmentalists
Other important options in the text also include the issue of loss and damage as well as a climate change displacement coordination facility.

According to parisagreement.org, covering the negotiations, the text now has 367 open brackets and 47 options remaining which represents a significant progress comparing to the version from December 5 that contained 916 brackets and 91 options.

High level segments of the major Conference of Parties to the United Nations Framework Convention on Climate Change kicked off on Monday. At the moment, officials from almost 200 states are reviewing the draft text of the final agreement that has been prepared at the Paris conference over the past week.

The Paris Climate Change Conference, running November 30 — December 11, is expected to result in the signing of a global agreement on the measures necessary to prevent global warming from exceeding 1.5 degrees Celsius, as an increase of average global temperatures of 2 degrees or more has been scientifically proven to have disastrous consequences for the planet.