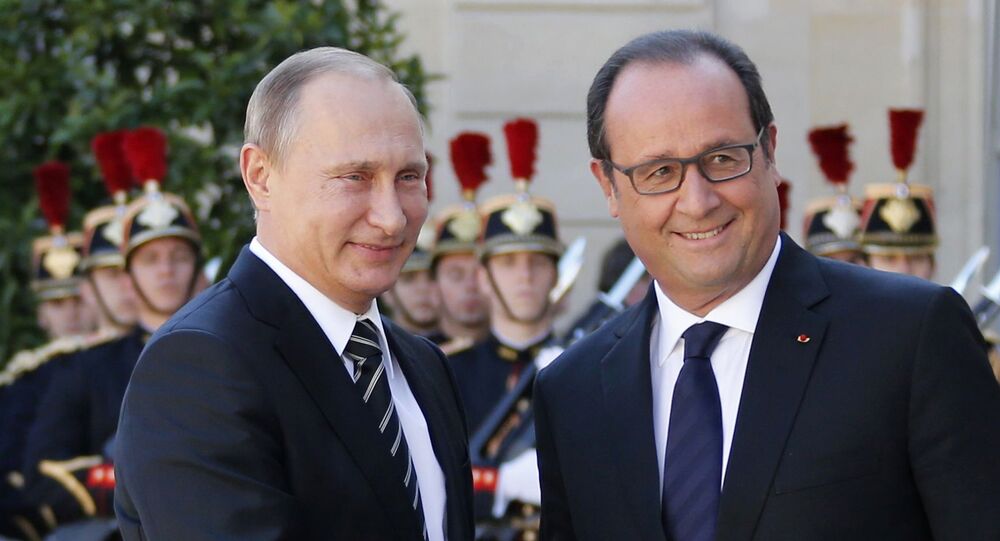 The main French opposition party has reportedly called for lifting sanctions against Russia.

© Sputnik / Dmitry Vinogradov
US Does Not Plan Russian Sanctions Relief for More Efforts Against ISIL
The Republicans, France's main opposition party, has urged French President Francois Hollande to call on the European Union to lift its sanctions on Russia, Reuters reported on Tuesday.

He was echoed by Marie-Christine Dalloz of the Republicans party, who is also member of the Parliamentary Assembly of the Council of Europe.

"Our party exressed a wish to discuss the lifting of the sanctions against Russia. I believe that it is a logical step aimed at developing bilateral partnership, " Dalloz pointed out.

The remarks came in the run-up to a visit by Hollande to Moscow, where he is due to meet Russian President Vladimir Putin later this week.

The Republicans is the party of the former French President Nicolas Sarkozy,who has repeatedly called for a more conciliatory approach towards Russia.

Earlier this month, Eckhard Cordes, head of the German Committee on Eastern Economic Relations, also clamored for the end of economic sanctions against Russia. According to the economist, the sanctions "deeply" affected the German economy with the trade volume between the two countries almost halving compared with the previous year.

© AP Photo / Alexander Kots/Komsomolskaya Pravda via AP
Germany's Fair-Weather Fighters: ‘We Want to Win With Russia, but Sanctions Must Remain’
The European Union and its allies have introduced several rounds of anti-Russia sanctions since 2014, accusing Moscow of meddling in the Ukrainian conflict. The claims have been repeatedly denied by the Kremlin.

In response, Moscow has imposed an embargo on food imports from the countries that sanctioned it in retaliation.

Since September 30, Russia has been conducting airstrikes against ISIL militants in Syria at the request of Syrian President Bashar Assad, while a US-led international coalition has been targeting ISIL positions in the country without the permission of Damascus or the United Nations.

EU vs ISIL: 'Asking Russia for Help and Keeping Sanctions in Place Absurd'

Why the West Talks about More Russia Sanctions After the Paris Attacks?