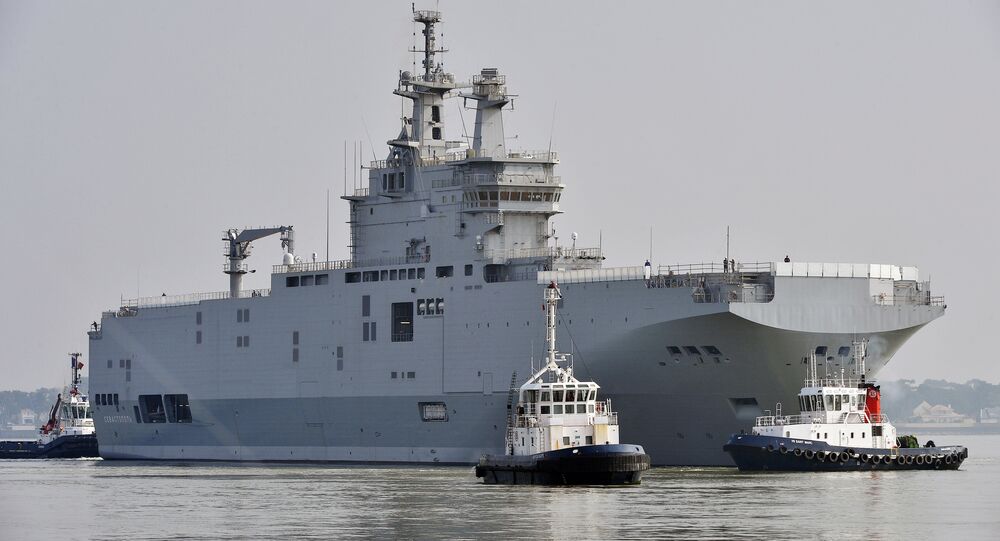 French President Francois Hollande has provoked a sarcastic response among the country's political figures after deciding to re-consider partnering with Russia; in particular, they pointed to the ill-fated Mistral helicopter carrier deal.

© AFP 2021 / Charles Platiau
French PM Hopes Hollande, Putin Agree on Anti-ISIL Fight Coordination
President Francois Hollande was harshly criticized by some French politicians over his policy U-turn on Russia. His government currently sees Moscow as its ally in the fight against ISIL, but earlier France had reneged on a deal to sell its partner two Mistral helicopter carriers, according to RIA Novosti.

"Russia. We refuse to give them the Mistral [ships], but ask them to help us in Syria!!!!! Fortunately, laughter does not kill…," French MP Thierry Mariani tweeted on Sunday.

For his part, Member of the European Parliament (MEP) Jean-Luc Melenchon also expressed surprise about the French authorities' policy on Russia.

"As far as Russia is concerned, seeing the Russians as partners is a rather joyful sharp twist by Francois Hollande," Melenchon said in an interview with the TV channel France 3.

He said that this is something that cannot help but raise one's eyebrow.

"From now on, we will be cooperating with the Russians in the maritime sphere, whereas we [earlier] refused to sell the Mistral ships to them," Melenchon recalled.

© Sputnik / Host photo agency
Compromise Needed: Hollande to 'Give Concessions' to Russia if France Wants Large Anti-ISIL Coalition
He was echoed by another French MEP, Nadine Morano, who pointed the finger at President Hollande's "inconsistent policy" on Russia.

"Hollande refused to sell the Mistral warships to Russia. Now he wants a bigger coalition with Russia. What an inconsistency", Morano told France 3.

France and Russia terminated a contract in August 2015 following Hollande’s suspension of the warships’ delivery late last year due to the Ukrainian conflict. Paris was obligated to repay Moscow over one billion dollars as compensation for the breached contract.

Mistral Warship to Be Stripped of Russian Equipment Within 2 Days

Russia Begins Talks With Egypt on Helicopters, Equipment For Mistrals