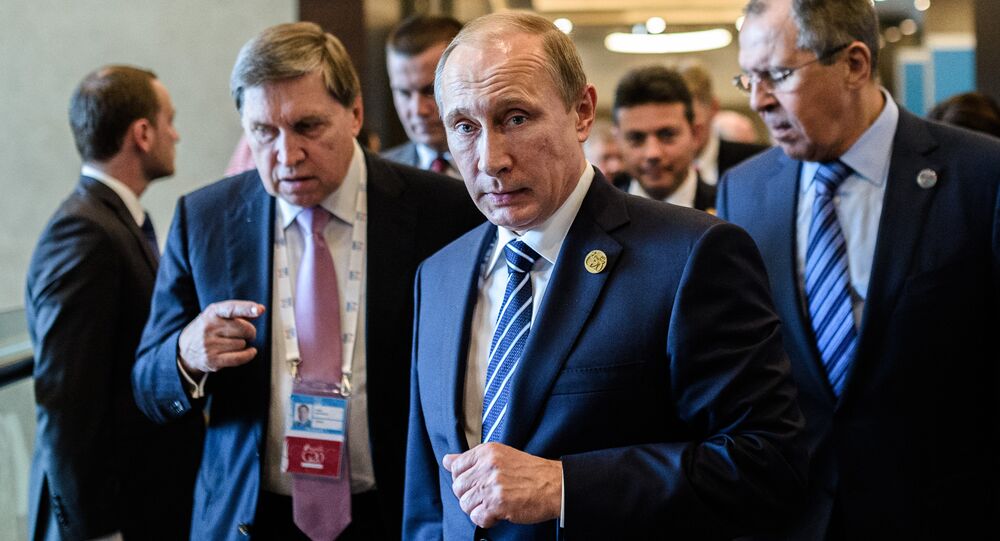 Last week saw an about-turn in the attitude of Western leaders towards Russian President Putin, which has been reflected by the Western mass media, mostly as a consequence of the G20 meeting in Antalya. Here are just several quotes from the Italian media praising Russia's leader and his policies, mostly towards battling ISIL.

“Sour Russian-American smiles needed to be transformed into real cooperation, both politically and militarily. Turkey must be mandated to launch anti-ISIL, and not anti-Kurdish operations, as it is now currently undertaking.

ISIL is intensifying its mass killing campaign with the only purpose being to draw us into a ground operation out of revenge.

It is a trap known only too well to everyone: for each “crusade” there will be a response in the form of a “holy war”, it will be a global conflict and the internal western fronts will eventually collapse.

A series of massive coordinated bombings are currently under discussion, as well as joint raids conducted by special forces and joint reconnaissance efforts. ISIL will then be crushed in Syria and Iraq.

It will be extremely hard. But if there is a victory, Putin will win twice.”

“Putin is the only one who has a ready strategy on how to react [to ISIL]. One of the strategies is to vocally reveal ISIL's sources of finance. Probably, as the West thinks, Putin exaggerated, probably he was referring to African countries, where there are the ISIL branches. Maybe he was hinting at the Caucasian republics and at Central Asia. Probably he wanted to recall the past of Saudi Arabia and other Persian Gulf monarchies? More likely though, he wanted to warn Turkey (which is keeping Europe on a tight leash over the migrant crisis) against the sale of oil, which is still in happening.”

© REUTERS / Kayhan Ozer/Pool
Russian President Vladimir Putin (C) walks prior to a meeting with his Turkish counterpart Tayyip Erdogan at the Group of 20 (G20) leaders summit in the Mediterranean resort city of Antalya, Turkey, November 16, 2015

Iltempo.it, in a follow up to Prime Minister Matteo Renzi’s comments on the outcome of G20:

“In short, the next day after the thaw between Russia and the US, for the sake of the common interest to destroy ISIL, it was Renzi’s turn to praise Moscow.

Only a few months ago, half of Europe was condemning Russia’s intervention in Syria, working alongside President Assad, not even mentioning Crimea.

It is a pity, however, that all the ideas of the young prime minister have already been voiced by Silvio Berlusconi previously, who repeatedly stressed the importance of Russia and warned against the US and EU pressure on Putin.”

Vladimir consists of the derivatives of two Russian words “vlast” (meaning power in Russian) and “mir” (Russian for peace and world), meaning “the one who rules the world.”

The name requires a certain behavior. And the second, patronymic name Vladimirovich, only doubles the internal force.

Nowadays the name is being associated with authoritarianism. It has recently been used as a synonym of a so-called Western threat.

Vladimir Putin however is being respected by the international community and by the European society for his tough honesty. Putin’s Russia is pursuing its imperial goals, but is doing it without any pretense or hypocrisy. Moscow is pursuing its policy, not throwing a stone then hiding its hand.

© AFP 2021 / KAYHAN OZER / POOL
Russian President Vladimir Putin signs a print of the G20-Turkey family photo at the Group of 20 (G20) summit, in the Mediterranean resort city of Antalya, on November 15, 2015

At the G20 Summit in Antalya Putin courageously told  to the whole world what is really going on. That ISIL is being financed by private individuals from 40 countries, even members of the G20. He blamed Qatar and Saudi Arabia for not noticing that many sheikhs are financing terrorist through the banking system of Kuwait.

Being in Turkey, Putin mentioned Erdogan himself, affirming that his country is supporting fundamentalists through oil purchases and arms supplies.

It is an uncomfortable truth and the question arises: why has the war against terror, headed by Washington, concentrated on false targets, such as Afghanistan and Iraq, and hasn’t hurt the Saudi creditors?

The Jury is Out and the G20 Shutters at the Verdict