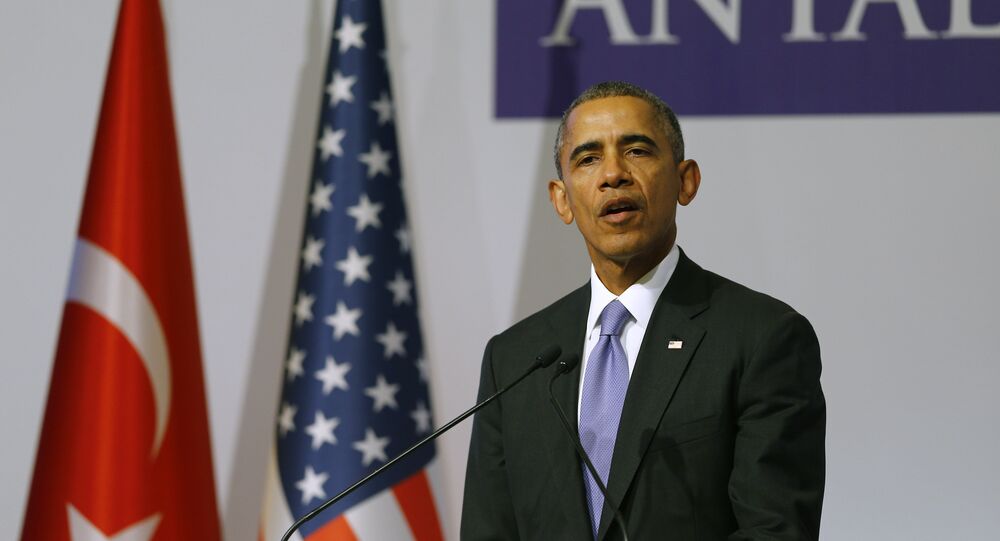 According to the US president, creating a no-fly zone in Syria will not help improve the situation in the region.

WASHINGTON (Sputnik) — Imposing a no-fly zone in Syria to improve humanitarian situation in the region is counterproductive, US President Barack Obama said Monday at a press conference on the sidelines of the G20 summit in Antalya, Turkey.

"It is determined that it would be counterproductive to take those steps," he said, referring to proposals to make the Syrian sky off limits to aviation.

Obama argued that the Islamic State (IS) militant group does not have planes. He added that "a true safe zone requires us to set up ground operations," noting that the bulk of civilian casualties stemmed from ground operations.

It is important to limit the space in which the Islamic State extremist group can operate in Syria and put the country on path toward reconciliation to eliminate terrorist threat there, Obama stressed.

"Our ability to shrink the space in which they can operate combined with a resolution of the Syria situation, which will reduce the freedom with which they feel that they can operate, and getting local forces who are able to hold and keep them out over the long term – that ultimately is going what’s going to make a difference," he said.

"It is going to take some time, but it is not something that at any stage in this process that we have not been aware needs to be done."

The US president Barack also ruled out putting boots on the ground in Syria as part of an operation against Islamic State (IS, or ISIL) jihadist group.

"The military could march into Mosul or Raqqa or Ramadi and temporary clear out ISIL," Obama said, adding this was not an option "unless if we are prepared to have a permanent occupation."

He said that without "local populations that are committed to inclusive governance and who are pushing back against ideological extremes" Islamists would eventually resurface and "We would see a repetition of what we’ve seen before."

The United States does not want embattled Syrian President Bashar Assad to play a role in the Syrian future, according to Obama.

"There are still disagreements between the parties, including, most critically, over the fate of Bashar Assad who we do not believe has a role in Syria’s future because of his brutal rule," Obama said as he accused the Syrian leader of waging a war against his own people.

The US president added that Washington is working with France on a new agreement to share intelligence in light of the deadly attack by Islamist terrorists in Paris.

"Today we are announcing a new agreement. We are streamlining the process by which we share intelligence and operational military information with France," he stated.

Again on the Table: Washington Weighs Pros and Cons of Syria No-Fly Zone