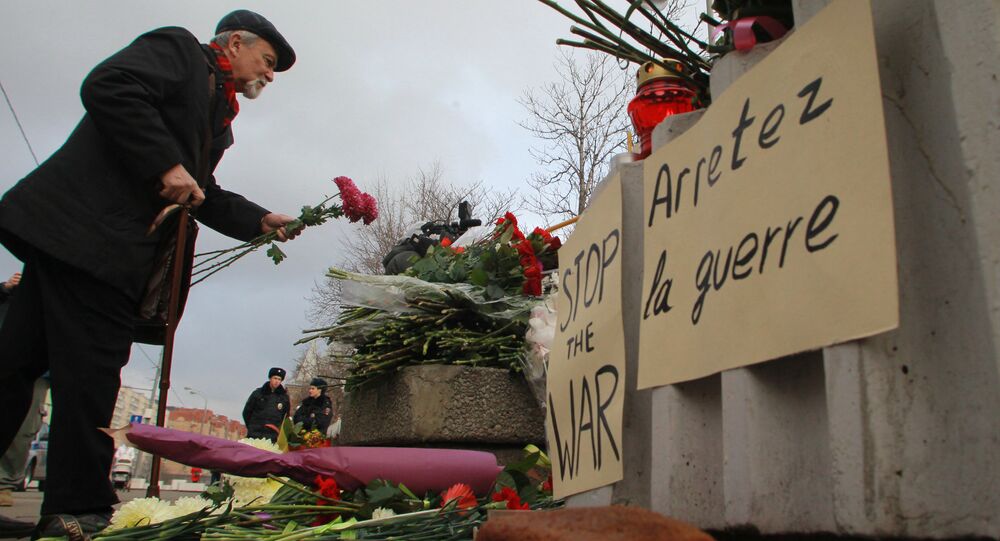 Russian politicians and other official figures have used social networks to express their sadness and solidarity over the Paris terror attacks on Friday.

© AP Photo / Uncredited/ French television pool
France's Hollande Says Paris Attacks Are 'Act of War', Carried Out by ISIL
Russian politicians and public figures have conveyed their grief and solidarity with the French nation after the series of terror attacks in Paris on Friday evening which have killed at least 128 people and injured at least 180 people.

"I would like to express my deepest condolences to you personally and to the whole of the French nation in relation to the deaths of a large number of peaceful citizens as a result of the unprecedented series of terrorist acts in Paris," said Putin in his message to Hollande.

"This tragedy is the most recent evidence of the barbaric essence of terrorism, which challenges human society," said Putin, who also reiterated the need for a united international front in the fight against terrorism, and offered the assistance of Russian security services in investigating the attacks.

"In this difficult hour for France, I ask you to convey my sincere sympathy and support to the French people to the family and close ones of those who have lost their lives, and also wish a speedy recovery to all those who suffered at the hands of the extremists."

The events in Paris are a horrifyingly cynical crime. We are mourning with France today https://t.co/kPJ3JXZuov

"The terror attacks in France are a horrifyingly cynical and brutal crime. The victims are innocent people. This is precisely the goal of the murderers: to cause pain and fear. They cannot be justified by any 'religious' or 'political' reasons they are citing. This is terrorism, terrorism we’ll keep fighting. My most sincere condolences to those who have lost their loved ones. Unfortunately, Russia is familiar with this pain. We are mourning with France today," Medvedev said.

"My condolences. Monstrous. Our president has called on all nations and religions to unite. World, hear Russia!" – Andrey Vorobyov, Governor of the Moscow region.

"We know the cost of tragedies from terrorism. I send my condolences to Parisians, and the victims, who were guilty of nothing. Another reason for the consolidation of the fight against the Islamic State." – Mayor of Moscow Sergey Sobyanin.

Governor of Chechnya Ramzan Kadyrov condemned the "monstrous events that have happened in Paris" on his Instagram account.

"As somebody who has devoted their life to the fight against terrorism, I would like to say to everybody who is responsible for taking decisions, that there are no good or bad terrorists. Their aim is to destroy humanity. If we don't beat terrorism together, the whole world will descend into chaos, there will be no end to such bloody events! Let justice prevail!" wrote Kadyrov.

"I have read the terrible news from Paris. The number of victims of the explosions and shootings is rising. The taking of hostages in the theater, reported in the media is monstrous. Parisians, France, we are with you! Stay strong! Your pain is our pain," – Russian Foreign Ministry spokesperson Maria Zakharova.

"This tragic morning began with taking flowers to the fence of the French Embassy. It couldn't be any other way. Emotions are breaking out. Now all of us are Parisians. Without pathos and without politics. Their pain is our pain. Like our pain was their pain after Beslan, after Nord-Ost."

"However, it is not possible to be completely without politics. After all, the nightmare of Paris in the cruelest way has answered all recent difficult questions. Do we have to fight terrorism in its lair? Do we have to join forces in the fight against it, forgetting about differences? Can everybody expect attacks from our common enemies, or will they act selectively, their deadly 'attention' bypassing somebody?"

© Sputnik / Vitaly Belousov
Muscovites Lay Flowers at French Embassy in Solidarity With Paris
"There is one answer: we have to. Whether we want it or not, our enemy has united us in coalition. Somebody not long ago promised that Russia can expect a quick 'reply' to its decisive actions in Syria. But the blow was struck in France. Because for them, we are in one trench."

"Today our heart is in Paris. We grieve with the relatives of those killed, we are in solidarity with the people of France, we consider this attack an attack on us as well. And we are ready to give the toughest and most resolute response – together with France and any sane forces of civilized humanity," Konstantin Kosachev, President of the Committee for Foreign Affairs of the Upper House of Parliament.